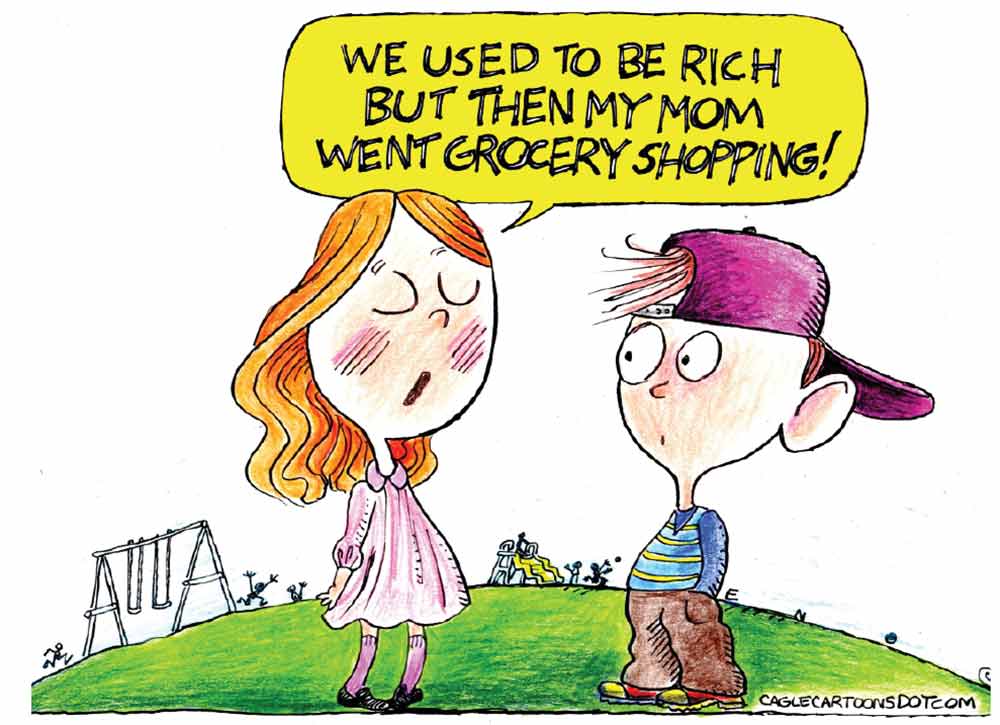 I never parted with a $20 bill faster.

It happened at one of my favorite diners. The Western omelet and Diet Coke I often get wasn’t the $11 it had been for as long as I remember. It was $16.

That expense, with my tip for the excellent waiter, consumed my entire $20 bill.

I feel bad for the diner’s owner. He told me that soaring food costs have been killing his profits for months. He’s been forced to raise his prices, yet he’s making half of what he used to. Why?

First, his labor costs are up because there is a shortage of workers and he has to pay them a higher hourly wage or they won’t take the job.

And second, because he has to charge higher prices, his customer base is dwindling.

As wonderful as a diner breakfast is, more people, getting hit by inflation across the board, are choosing to stay home and eat a bowl of Wheaties or Kix instead. I’m certainly no economist. But I know this: inflation stinks.

According to one financial advisor quoted in Forbes, there are a few driving factors behind our current spike in prices – high demand and low supply.

COVID-19 lockdowns caused Americans to sit on their money for months but lately they’ve been injecting those dollars back into the economy with abandon.

The nearly zero-percent mortgage interest rates we’ve been enjoying since March 2020 are driving up the demand for houses – and therefore their sales prices. And global supply chains for many products are all goofed up because of the pandemic’s disruptions.

For instance, due to a shortage of vehicles for sale — new vehicles are being held back by car makers because of a shortage of computer chips — new and used car prices are ridiculously high.

I bought a new Toyota Tacoma Off Road truck in December of 2019 and it’s done something no other vehicle I’ve bought has ever done in my life: gone up in value. Kelly Blue Book tells me that my truck with 11,100 miles on it is worth $3,000 more than I paid for it brand new.

That is one of the few upsides to inflation. Owning property is another. If you have a fixed-rate mortgage, but the dollar “value” of your home keeps rising, you at least keep pace with inflation.

But if you are retired, as my parents are, and living on a fixed income, inflation is an invisible  tax that nibbles at the buying power of your money.

Your limited dollars buy fewer groceries and other increasingly expensive basic items you need to sustain yourself.

I trust in the efficiency of the many very talented businesspeople in our mostly free economy to adjust to inflation and get our markets running smoothly again.

But I don’t trust our government leaders who have been spending recklessly for years and are currently attempting to ram a massive, ridiculous spending bill down our throats that could make high inflation a lasting problem.

I fondly remember the Clinton presidency when, for a blip in time, our government actually took in more money than it spent.

But since 2001 Presidents Bush ($6 trillion), Obama ($9 trillion) and Trump ($6 trillion) have reversed that trend and added trillions to our total debt.

Way too few people in Washington seem to care about our $28 trillion national debt or the inflation they’ve caused.

They don’t care a whit about struggling diner owners or cash-strapped patrons who now eat cereal for breakfast.

Tom Purcell is an author and humor columnist for the Pittsburgh Tribune-Review. Email him at This email address is being protected from spambots. You need JavaScript enabled to view it..