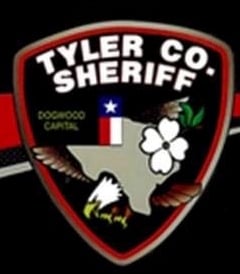 WOODVILLE – A Jefferson County woman is in the custody of the Tyler County Sheriff’s Office following a police pursuit that began in Dam B and ended in Woodville.

According to Tyler County Sheriff Bryan Weatherford, on Monday, at approximately 7:25 a.m., a 911 call came in, reporting a nude woman standing on the side of the road. Deputies with TCSO and EMS headed toward the location, FM 92 North at county road 3715, as the caller had reported. The caller, who was a female passerby, told dispatch that she had stopped to check on the naked female subject, and in the process, a log truck driver had also stopped.

While the deputies were heading to the location, the subject jumped into the driver seat of the vehicle and drove away with the caller’s two grandchildren in the backseat. The woman had reportedly offered the woman, who complained of thirst, a bottle of water, and when she went to open her trunk is when she took off with the car and children.

Weatherford said that two minutes later, the deputies received word that the suspect dropped the children off at the Dam B Jiffy Mart at the intersection of FM 92 and US Highway 190. Weatherford said the two children were returned safely to their grandmother.

The deputies were soon able to locate the stolen vehicle westbound on 190, and traveling at speeds of up to 95 mph.

TCSO deputies and officers with the Woodville Police Department pursued the vehicle throughout the city of Woodville, and the pursuit ended on Wheat Street, right before 8 a.m.

The suspect was identified as 28-year-old Lacie Cole, of Orange, and was taken into custody.

During the pursuit, one eyewitness said the suspect was seen in the Walmart parking lot, where she backed into a patrol unit. Reportedly, she also traveled into opposite lanes of traffic during the chase.

Cole was later evaluated at Tyler County Hospital, and according to Weatherford, the case is under investigation.