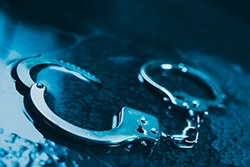 SPURGER – A welfare check last Friday of a man carrying a meat cleaver resulted in an arrest for drug possession.

According to Tyler County Sheriff Bryan Weatherford, deputies with the Tyler County Sheriff’s Office were patrolling in the Spurger area at approximately 3:45 p.m. on Friday, March 4, when they stopped to check on the welfare of a man who was on foot.

The man, whom the deputies identified as George Lindsey, a 56-year-old Hillister man, was walking on the shoulder of FM 92 near Mott’s Wholesale/TKC Knives carrying a meat cleaver. Weatherford said the deputies knew the man, and while speaking with him, he admitted to having a small amount of marijuana in his pocket.

The deputies searched Lindsey and discovered not only the marijuana, but a small, clear plastic baggie containing a crystal-like substance, which field-tested positive for methamphetamine.

Lindsey was arrested and taken into custody. He was transported to the Tyler County Justice Center, and charged with possession of a controlled substance, as well as possession of marijuana. His bonds were set at $12,000 by Pct. 4 Justice of the Peace Jim Moore. He is out of jail on bond.