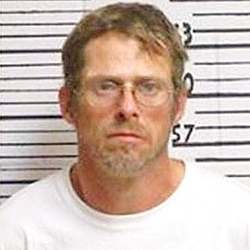 CHAMBERS COUNTY – A Woodville man with an extensive criminal history was arrested last week in Chambers County on charges of a stolen vehicle and drug possession.

Last Tuesday, a detective with the Chambers County Sheriff’s Office made contact with Roy Harrell McDaniel, a 39-year-old Woodville man, after observing an older model wrecker-style truck attempting to hook up to an abandoned vehicle.

The vehicle, according to Chambers County Sheriff Brian Hawthorne, had been abandoned a few days near the Trinity River bridge.

According to a news release from Hawthorne’s office, the detective on the scene observed an absence of Texas Department of Licensing and Regulation numbers on the side of the truck, prior to making contact with McDaniel. When the detective spoke to McDaniel, he observed multiple discrepancies in his story.

Some additional information turned up the fact that the vehicle McDaniel was operating was stolen out of Orange County, and after a probable cause search of the stolen vehicle, approximately 2.5 grams of methamphetamine was uncovered.

McDaniel was taken into custody and transported to the Chambers County Jail on the charges of unauthorized use of a motor vehicle and possession of a controlled substance (penalty group one.)

Hawthorne said he appreciated the “dedicated service of Chambers County deputies and detectives as well as their pro-active police work and commitment to keeping Chambers County safe,” after McDaniel’s arrest.

In 2019 McDaniel was wanted in Tyler County on charges regarding a stolen travel trailer. He had been arrested for parole violations in Jefferson County but bonded out before a warrant could be issued out of Tyler County on the felony theft charge.

At the time Tyler County Sheriff Bryan Weatherford said his agency had handled McDaniel on numerous offenses, including felony theft; tampering with identification numbers and unlawful possession of a firearm. He was later arrested that November on the travel trailer theft charge.

Records show that McDaniel has since bonded out of the Chambers County Jail.