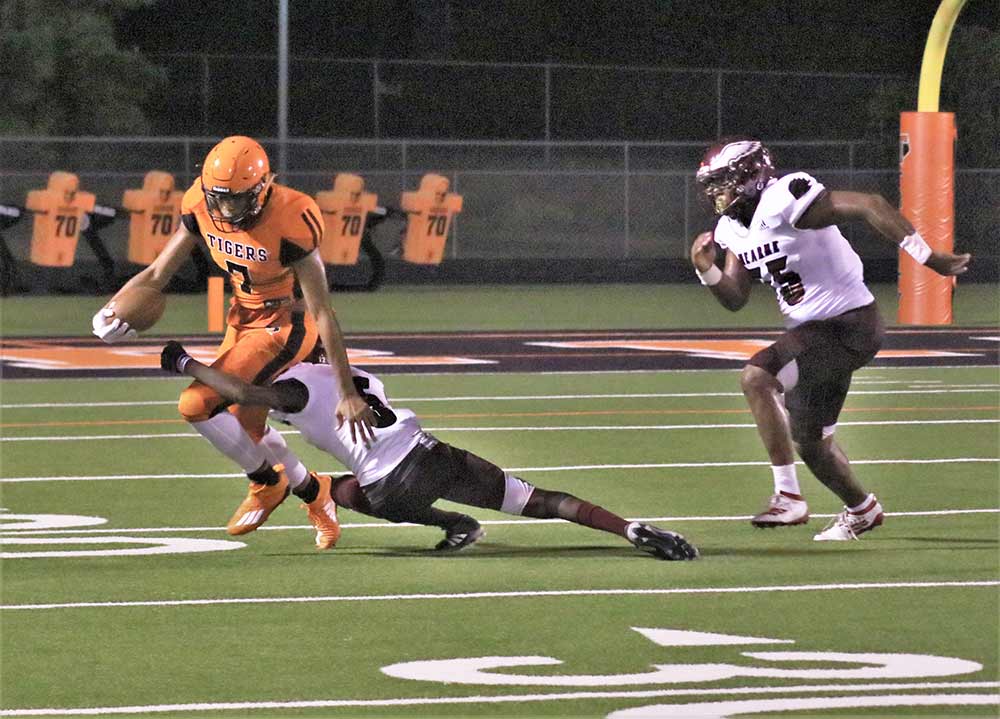 Trinity Tiger receiver Terius Maxie looks for running room following a kickoff during a game on Friday against Hearne. The Tigers lost the season opener 36-6. (Photo by Tony Farkas/TCNS )

TRINITY — The Tigers opened the 2021 season Friday with a 36-6 loss against the Hearne Eagles and learned there is more work to be done.

Although disappointed in the 36-6 loss, Head Coach Patrick Goodman said he is optimistic that Friday’s game against Grand Saline will be more competitive. The offense is hopeful of getting three starters returning this week, including two offensive linemen and our starting quarterback.

The defense will concentrate on alignments and being in position to get off the field on fourth down.

Against the Eagles, the Tiger offense was never able to get on track due to the Eagle defensive line spending most of the night in the Tiger backfield disrupting plays. The Tiger defense was able to minimize the total yardage the Eagles gained but was unable to get off the field on crucial fourth-down plays.

By the end of the first half the Eagles had a commanding 28-0 lead over the Tigers. The halftime break brought some adjustments by the coaching staff and the Tiger defense was able to correct some of the defensive mistakes and hold the Eagles to a single score.

The offense still struggled to gain momentum; however, the special teams was able to contain the Eagle punter after a bad snap. With first-and-goal from the 3-yard line, Andrew Crabtree was able to find the end zone and put the Tigers on the board.

The Tigers were originally scheduled to travel to Groveton Friday Night to challenge the Indians, but due to a spike in COVID-19 cases, Groveton ISD cancelled all classes until Sept. 7 to give students the time to quarantine and clean the schools.

The Tigers will still be playing the Indians, but these Indians, from Grand Saline, have a 7 p.m. appointment at Tiger Stadium. This will be the first time these two teams have played since a playoff game around 1983.