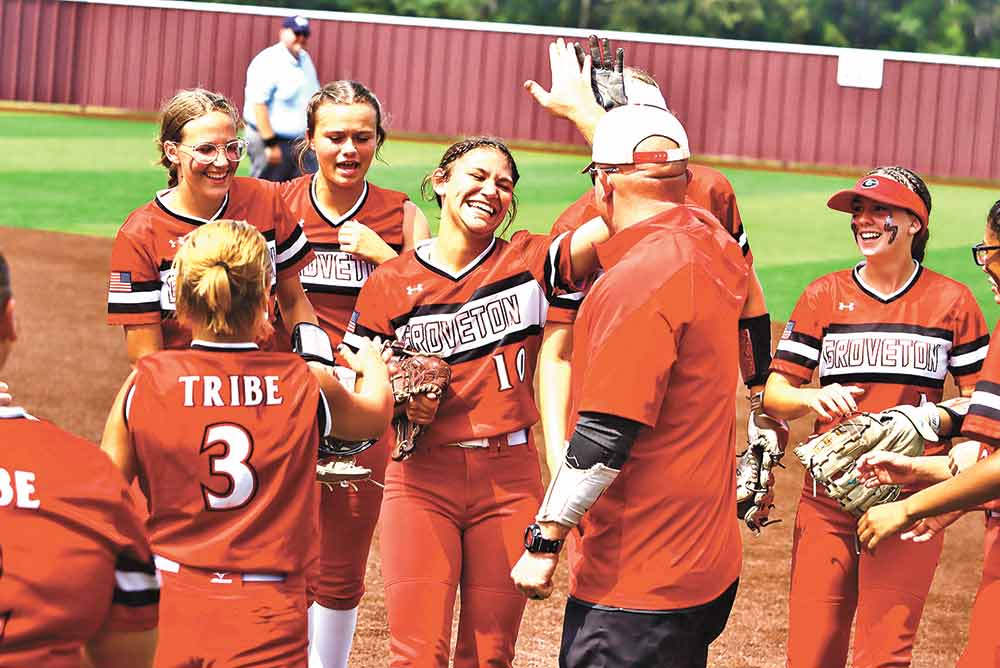 The defense, along with Coach Chris Sexton, celebrate. Courtesy photos by Martha Mericle

WHITEHOUSE — The Groveton Lady Indians continue their romp through the Cinderella Season, down Kerens in two games to claim the Regional Semifinal Championship last week.

The two wins, 9-4 on Friday and 14-1 on Saturday, sets the team up to reach the Regional Final for the first time in school history.

Coach Chris Sexton said words cannot express how proud he is of the team and the hard work they have put in.

He also said he wants to thank the many fans and parents that made the long trip to Whitehouse to see history be made in person.

In the Friday game, Kiki Smith was a monster at the plate, going 3-for-4 with 2 doubles and 3 RBIs. Shelby Arnold went 2-for-4 with two RBIs, and Abby Lee, Bailee Reed, Tatum Porter and Madison Thomas each contributed a hit.

Martin and Megan Luce combined for pitching duties, posting 5 strikeouts and only one base on balls and giving up 10 hits.

In the Saturday game, Thomas went 3-for-4 and Lexi Easterling 3-for-five to lead the team. Smith and Arnold each contributed 2 hits apiece, and Reed and Luce one; Easterling, Luce and Smith notched a triple apiece, while Arnold, Easterling and Thomas each hit a double.

Arnold gets the win on the mound, allowing only 1 run and five hits while striking out 5.