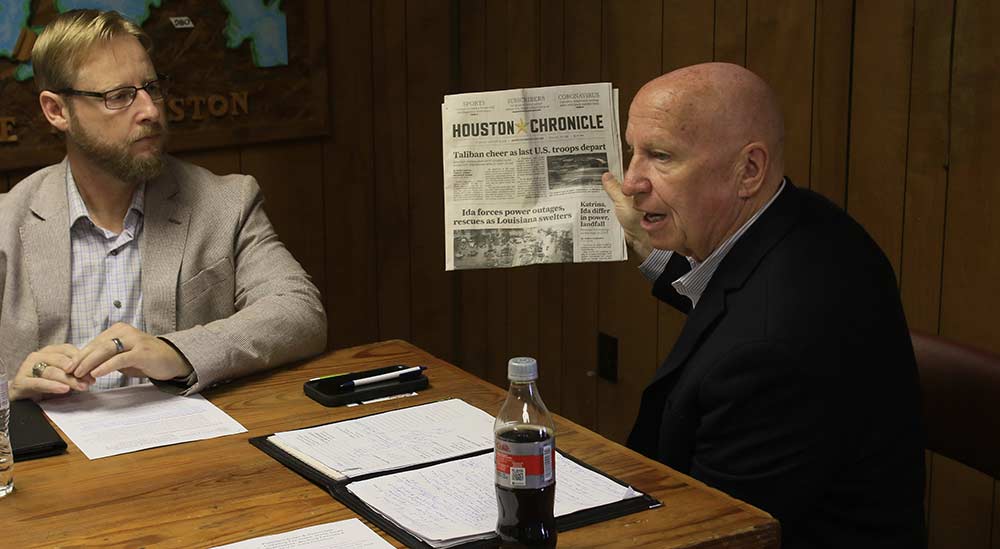 U.S. Rep Kevin Brady, R-Texas, told members of the Trinity Peninsular Chamber of Commerce he dreaded seeing a headline such as the one in the Houston Chronicle state the Taliban was cheering U.S. troop withdrawal. (Photo by Tony Farkas/TCNS)

TRINITY — The situation in Afghanistan has left the United States less safe, as well as seen as an unreliable partner to its allies around the world, according to U.S. Rep. Kevin Brady, R-Texas.

Brady held an informal roundtable discussion at the Trinity Peninsular Chamber of Commerce on Wednesday in Trinity.

“For a country as great as ours, this is a shame, and this is a day that will live in infamy, the day we surrendered to the Taliban,” Brady said. “We betrayed our allies, both locally and internationally, we left Americans behind. Russia and China are cheering this, as we just gave them a foothold here. There was no reason, or no political boast that was worth this.

Brady said that while there was no question the U.S. needed to end its presence in Afghanistan, how it happened was questionable.

“At the end of the day, I feel as a country we are less safe,” he said.

Brady also took the Biden administration to task for its handling of COVID and the economy.

“It’s stunning how hard it’s been for our businesses to survive in the last year and a half,” he said. “We did some good things, such as the PPP loans, but 2021 has been very bumpy, and job growth has slowed down. Part of the reason is employers can’t find workers. Not just retail, but all up and down the chain. I worry that not only is that slowing recovery, but it’s driving inflation.”

Brady did tout the efforts of Texans, saying that it was one of the first states reopening after the COVID shutdowns, and it did that safely and responsibly.

“There are still parts of the country where they’re still debating whether to open schools that have been closed for 1 ½ years,” he said.

He also said that four in 10 people were making more income staying home than working, and even though the federal money ended recently, states have the ability to continue the program.

“I’m worried there are more barriers to working, such as the child tax credit; we doubled it, but this new emergency credit expanded it more and also said people don’t have to work to claim it,” Brady said. “It may become permanent, and it has hit the restaurant industry hard. Additionally, the government blew the roof of off Affordable Care Act subsidies, and gave it to everyone, so that means that you can get better health care by not working.”

Permanent spending in connection with the COVID pandemic will cripple the economy by causing people not to work. Brady said that so far, for an average family of four, with parents working, Congress has approved $26,000 in stimulus. For the same family with one parent losing a job, the government has provided $67,000; and with both parents needing help, $109,000.

“That’s why people aren’t going to work,” he said.

Additionally, Brady said he is worried about the war on energy. Aside from closing pipelines and denying drilling permits, there are proposals for about $145 billion in new taxes on oil and gas, he said.

Brady said that instead of killing oil and gas through taxes, bring affordable energy come to Texas, where technology innovation is ahead of the curve.

Brady also touched on other topics such as education curriculum, media bias, China and the IRS.