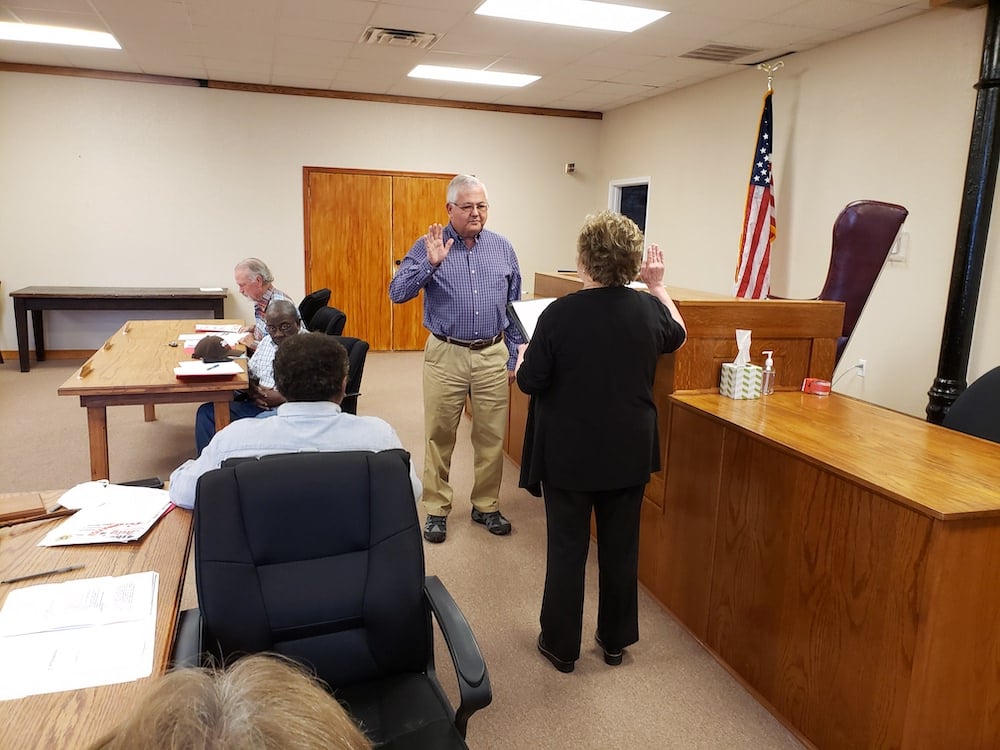 TONY FARKAS | TCNS City Judge Angelia Evans swears in Tommy Walton as mayor of the City of Groveton. Walton won the post in the May 1 election.

GROVETON — The Groveton City Council delayed action on changing the salary of the police chief, in light of the fact that the city has to replace John Raiford, who resigned May 14.

Mayor Tommy Walton said the resignation was effective immediately. Daniel Kee was appointed interim chief at an emergency meeting on May 14.

“He did not leave on bad terms,” Walton said. “It was time; he stopped attending meetings, and his reports reflected no activity, and I think he just got tired.”

The city is budgeted for two officers, and currently is using reserve officers and Kee for patrol until hiring is done. Walton said sheriff covers for the city as well.

At its regular meeting on May 24, Walton said he was considering $18 to $20 per hour for a pay scale; however, Council Member Joe Don Kennedy asked to delay any action because the matter needed more discussion, and the city at this time did not have a chief.

Council Member Autumn Dial said that she has been investigating the matter, and Groveton is about $10,000 under pay scales offered by towns of similar size.

Walton said in order to hire a chief, there needed to be some sort of plan in place.

Kee warned the commission that the call volume after hours is pretty high, and that would be a detriment to hiring someone.

“You can’t salary someone and call them out 24 hours a day,” Kee said. “Salary is based on a 40- to 50-hour week, and 3 in the morning isn’t salary time. You need to pare down your expectations.”

Kee also said the city needed to decide who will hire a replacement officer — the city or the newly hired chief.

“It appears you’re tabling this to discuss the issues,” Kee said. “I encourage you to please discuss it to the fullest. I’m in limbo in the meantime.”

In a separate matter, Maretha Lawrence asked the council to be more aware of some of the things it does, as an event during the city election could be construed as racist.

Lawrence said that during the vote, there were two black women serving as election judges at the city polling station, and someone made a point of saying that should not be allowed to happen.

“I started not to say anything, but I felt it was a racist statement,” she said. “To me, that was saying you can’t trust two black people.”

Walton said that the statement that was made was not meant to be racial, but was a request for equal representation in election judges.

Lawrence said she expected the council to address it, and not change out one of the election judges for a white person, which was the damaging action.

“There’s nothing that can be done about it now, but I want to put that out there so next time it can be addressed properly,” she said.