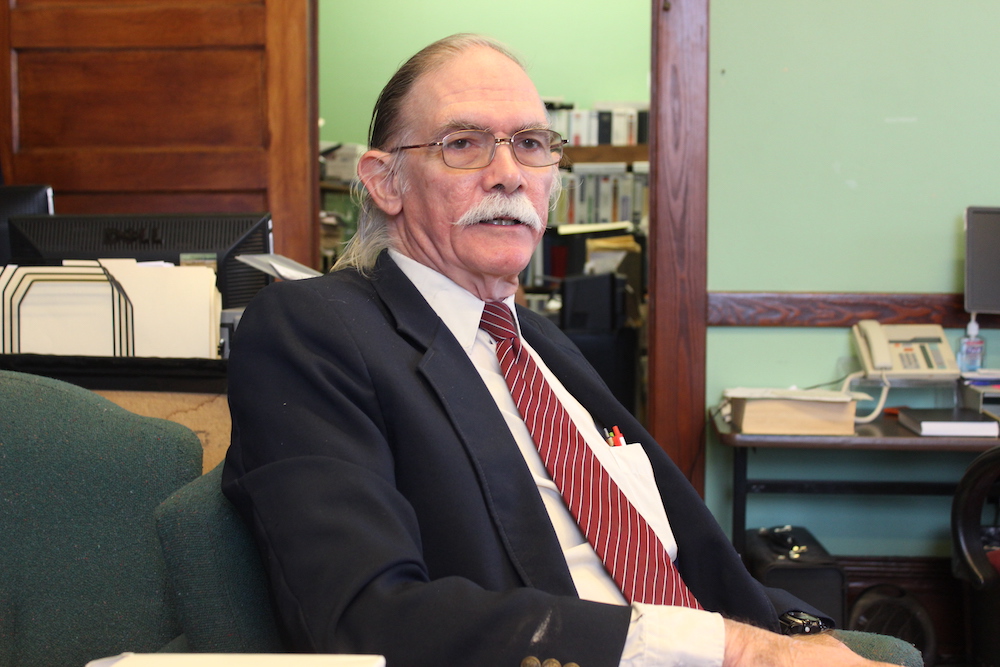 TONY FARKAS | TCNS Joe Warner Bell talks about his tenure as County Attorney for Trinity County. His last day in office is Dec. 31.

GROVETON — When Joe Warner Bell first took office as Trinity County Attorney, cases were entered on typewriters, and the only places to buy liquor in the area was Houston, Huntsville and even Groveton.

The “mostly” Trinity County native has been County attorney 43 years, 3 months 16 days and 2 hours, give or take. He got into the position because he was appointed; Bell was in private practice in Trinity for six years prior to taking the county job.

“I was in general practice, which means I did anything that came my way, which is pretty much what I do now,” he said.

When the 258th Judicial District was created, they needed to fill three positions — district attorney, district judge and county attorney, and Bell got the nod.

He kept with it, though, for the simplest of reasons — it was a steady paycheck.

“It didn’t have a lot of benefits at the time, but I felt I could do more here than I could (in private practice),” he said.

Was appointed to the position first, then had been running for reelection since then.

In addition to the changes in liquor sales and technology, the courthouse has changed, including his office location, which was moved six or seven times over the course of his career.

Bell said the population of the county has doubled, and the jail, which has room for seven people and was almost never full, is full now almost all the time, with up to 40 inmates at a time.

The most contentious commissioners’ court Bell said he has advised was the first one he served with, since it had two commissioners who were related and on opposite sides of the political spectrum, another development that is mirrored in politics today.

“There was one commissioner that I had prosecuted three times for DWI,” Bell said. “In fact, on the filing day for election, he was sitting in jail.”

The things his office has had to deal with over the years has been varied, but one set of cases in particular stands out, and echoes some of the issues of today: election fraud.

Bell said there were ballots with forged signatures on them, and even a few of them were marked for people who were in nursing homes. Several elderly women voted twice; they had voted early, but were hauled to the polls on election day and were made to vote again.

“I didn’t grasp the depth of the problem until I got into office,” he said. “People have said that there’s nothing wrong with mail-in voting; I voted mail-in one time and it got lost. My mother, who was over 65, voted, and her vote was tossed out because they said she was a crazy old woman. What it was, the person she voted for, they didn’t want that vote counted.”

The more heartbreaking cases Bell said he has dealt with involves child abuse, especially when, as it happened in one case, involves the parents and stepparents. However, he said that the most rewarding part of the job was finding homes for neglected and abused children, and getting women away from abusive partners.

Also, when Bell took office, there was a civil suit against the county over county districts, which were said to have disenfranchised African American voters; Bell got the suit delayed until new district lines could be drawn, which led to the suit being dropped.

Bell said his position is to act as the attorney for the county, but there’s a difference between his office and district attorneys: the DA prosecutes felonies, and everything else falls under the purview of the county, except child support which goes to the attorney general. 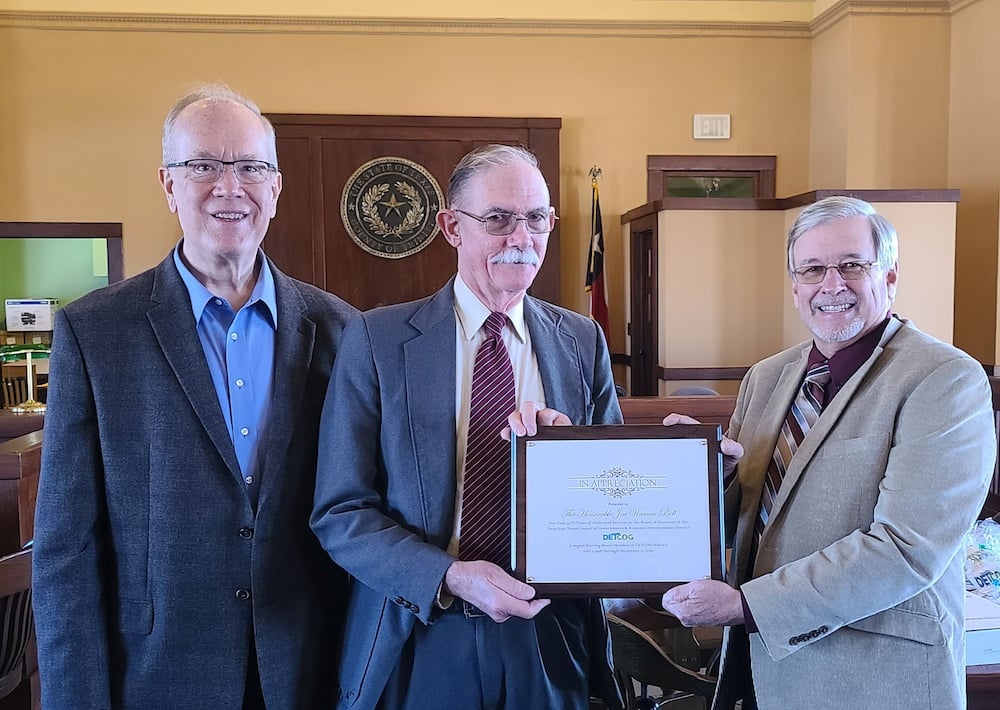 COURTESY PHOTO Trinity County Attorney Joe Warner Bell is presented with a plaque of appreciation by representatives of the Deep East Texas Council of Governments on Thursday. Bell has been a member of the DETCOG board for 42 ½ years, since July 1, 1978, which DETCOG Executive Director Lonnie Hunt described as “some kind of record.

“Also, we’re in charge of eminent domain, when the government comes to you and tells you they’re going to take your land,” he said. “We’ve only done that a couple of times; most landowners don’t mind giving up a little strip of land to make roads better or fix the bridges.”

“We’ve had a lot of fun,” Bell said. “I’m going to rest a bit, but I still have some work to do for the county. They’ve contracted me to do any redistricting (because of the 2020 Census).”

Bell said that the bulk of his job has been answering questions, then, after a long chuckle, Bell said of his successor, Colton Hay: “Be ready for it, it’s coming.”