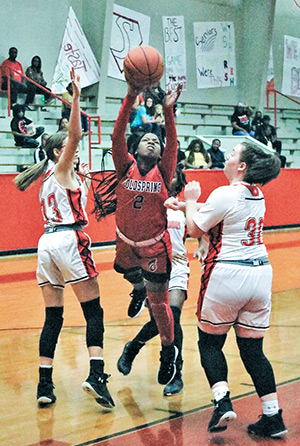 Coaldspring-Oakhurst’s Brianna Shaw-Rucker (No. 2) struggles against the defense during the Lady Trojans’ 39-29 loss to Groveton on Dec. 30. Photo by Tony FarkasBy Larry Lamb
Houston County Courier

CROCKETT — The Coldspring Trojans fended off the Crockett Bulldogs 64-61 to win the Silver Bracket in the Houston County Holiday Classic on Thursday night.

Trailing by 10 early in the second half, Crockett tied the game with 3:40 left  but a pair of free throws by All-Tournament honoree Luke Monroe and a trey by Cam Shaw-Rucker put the Trojans up 61-56 with 1:30 left.

After a steal by Bre’dron Tucker, the Bulldogs cut the lead to three on a layup by Jadyn Collins at the 1:00 mark, but Coldspring answered with a pair of free throws by K.D. Bookman to make it 62-58 with 51 seconds left.

Crockett made it interesting when All-Tournament performer D.J. Walker heaved up a deep trey from the corner with 38 seconds left to cut the Trojans’ lead to 62-61.

A bucket by T.C. Chambers provided the Trojans a three-point cushion with 25 seconds to go.

When Crockett missed two free throws with :08 left, Coldspring collected the rebound and called time-out. The Bulldogs regained possession when the inbounding Trojan stepped on the baseline but they were unable to muster a rally in the remaining seven seconds.

Shaw-Rucker pumped in 29 points and Monroe canned 24 to pace the Trojans.

Coldspring went 3-1 in pool play and finished the 18-team tournament with a 5-1 overall record.

Advancing to the Silver Bracket, Coldspring defeated Rusk 71-53 Thursday morning and then knocked off the tournament co-host.