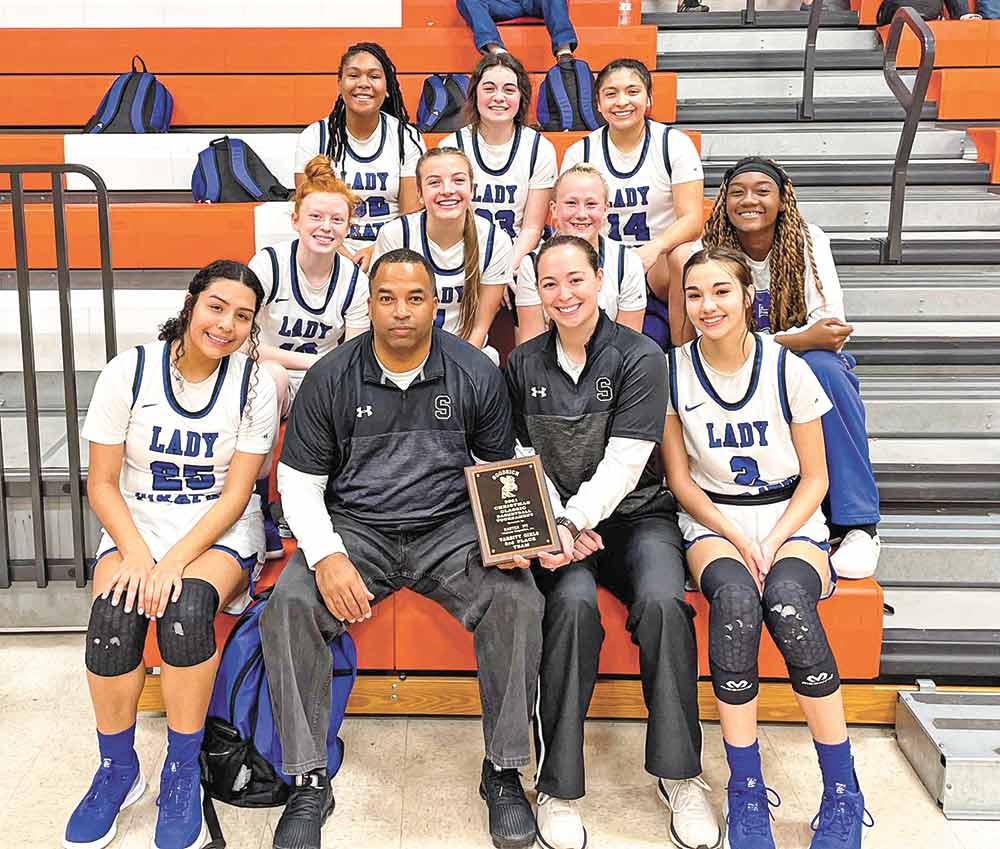 HUNTINGTON — Coldspring-Oakhurst defeated Huntington 52-47 in the final day of the Huntington Varsity Tournament.

On Dec. 10, the Trojans split, losing to Chireno 58-45 but winning against Pineywoods Community Academy 72-55.

Luke Monroe chipped in 38 points on the day, followed by Cam Shaw-Rucker with 24, K.D. Bookman with 20 and Xzavien Major with 11.

On the opening day of the tournament Dec. 9, Coldspring-Oakhurst lost to Dayton 52-37; and defeated Huntington 63-61.

Cam Shaw-Rucker contributed 26 points in the split effort, followed by Luke Monroe with 25.

On Dec. 7 in Livingston, the Lions built a large lead of more than 20 points in a non-district tip at Lion Gym and cruised to a 73-61 over the previously unbeaten Trojans.

Coldspring coach Greg Devers was also impressed with the performance. 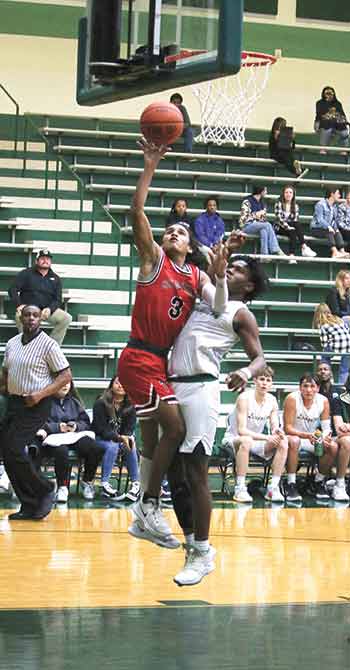 Luke Monroe (3) led the Trojans and all scores with 31 points. Photo by Brian Besch“(William Dault) just shot the lights out tonight,” Devers said. “(Dault and Jordan Bush) — they hit some big threes. I think in those first seven games, we only allowed seven threes. We are going to be successful with up-tempo and the press. We did in the second half, but I needed about eight more minutes.”

The Trojans did not throw in the towel in the final period, and instead amassed 27 points. Most of the damage was caused by Luke Monroe, who poured in 18 points in the quarter. He led all scorers in the contest with 31. Helping him was Chris Harden with 14 and K.D. Bookman with nine.

Livingston coach Calvin Phillips said Tuesday was the best game his squad has played this year. The Lions broke the menacing Coldspring press enough to get several advantageous breaks to the bucket and shot the ball well all night.

Leading the attack was William Dault, who scored 30 points, with 22 of them before halftime. Dault moved to Polk County and has added help, but had something extra versus the Trojans.

“The kid from Austin, Dault, he hasn’t been on fire like that. I didn’t realize he had that many points,” Phillips said. “Hopefully, he is out of his slump, because the first four or five games we played, he wasn’t even shooting like that. He was getting frustrated because he knew he was a better shooter.”

“I have a couple of guys out right now and have been playing with eight all year,” Devers said. “We just played four games over three days, but Livingston did a great job today. Calvin had his team ready for our press. I think it came down to them making threes and free throws, and we didn’t. We didn’t start hitting threes until the fourth quarter.

“Sometimes it is good to have a loss like this and maybe we can rebound from it,” Devers said. “With this team being so young and inexperienced, it is a good time for them to learn. They have to understand that they have to get up for everybody; they can’t just pick their opponents.”

Devers said his team played well in the recent Big Sandy tournament, taking the championship over Splendora Saturday. He is hopeful to get a couple of starters back soon to offer some depth for the long season.

Top scorer was Jesse Valerie with 11.

Tristen Cullum led scorers with 35 on the day, followed by Lucas Moore with 27, and Payton Burton had 19.

Tristen Cullum topped the day with 26 points, followed by Lucas Moore with 15.

Head Coach Thaddeus Gordon said Coldspring had 17 fouls in the first half.

Top scorers were Ella Phillips, who had 22 rebounds and 6 points; A’Lyvia Jackson with 16; and Shanyia Goffney with 11 points. Briana Shaw-Rucker had 10 points and 5 steals.

The Shepherd Lady Pirates competed in the West Hardin Christmas Tourney this past weekend, finishing 4-0.

Grace Ramos and McKayden Nelson led the way along with Tangela Yates who avg double digits in rebounds all weekend.