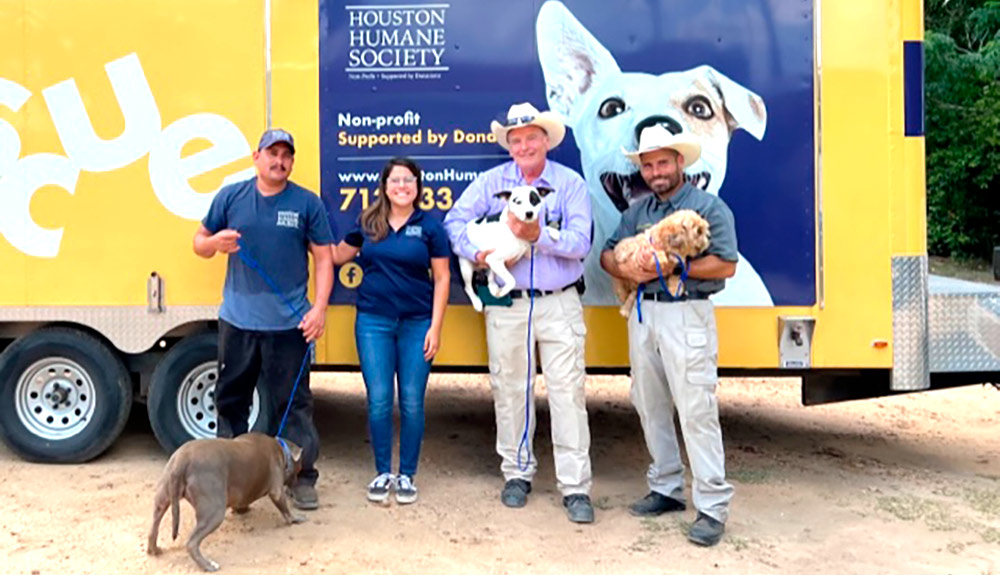 Courtesy photo Members of the Houston Humane Society, along with Constable Sam Houston, help retrieve the 33 animals being cared for by an elderly couple. The dogs had been dumped along the roadways of San Jacinto County. Courtesy photo

The Precinct 3 constable said that San Jacinto County has seen a proliferation of dumped dogs, and it has caused numerous problems, stretching county resources and even putting strain on county residents.

Houston said the county is serious about enforcing animal control laws, and wants to raise awareness.

Sparta said that last week, their office had an elderly couple come in with a problem with dogs.

“A lot of dogs had been dumped in the county, and (this couple) have been trying to rescue them over the last few months,” Sparta said. “At the time they had more than 30 dogs, and they needed our help.”

The constables reached out for assistance from area shelters, and the Houston Humane Society came to help rehome the animals, and the agencies are looking for other avenues of adoption as well.

“We need everyone to know they need to get their dogs spayed and neutered,” Sparta said. “We need to secure their dogs, and we need people to know that animal cruelty will not be tolerated. We hope the people come together to keep our animals safe, and we want to stop the problem before it gets out of hand.”

Sparta said his office will follow up to make sure this doesn’t happen to the couple again.

“We probably get 10 to 12 calls a day regarding dumped animals, and a shelter has been under construction by San Jacinto County for more than a year and is not completed,” he said. “We need more resources.”

One such call led to an arrest of a Cleveland man.

“We received reports of dogs being buried on the property, and when we went to investigate, found the animals to be in deplorable conditions,” he said. “We then contacted the Houston Humane Society for help, and the suspect surrendered the animals.”

Seven pit bulls were taken for treatment, however one of the animals died due to starvation.

Kenneth McCarthy, 22, of Cleveland, was charged with cruelty to non-livestock animals.