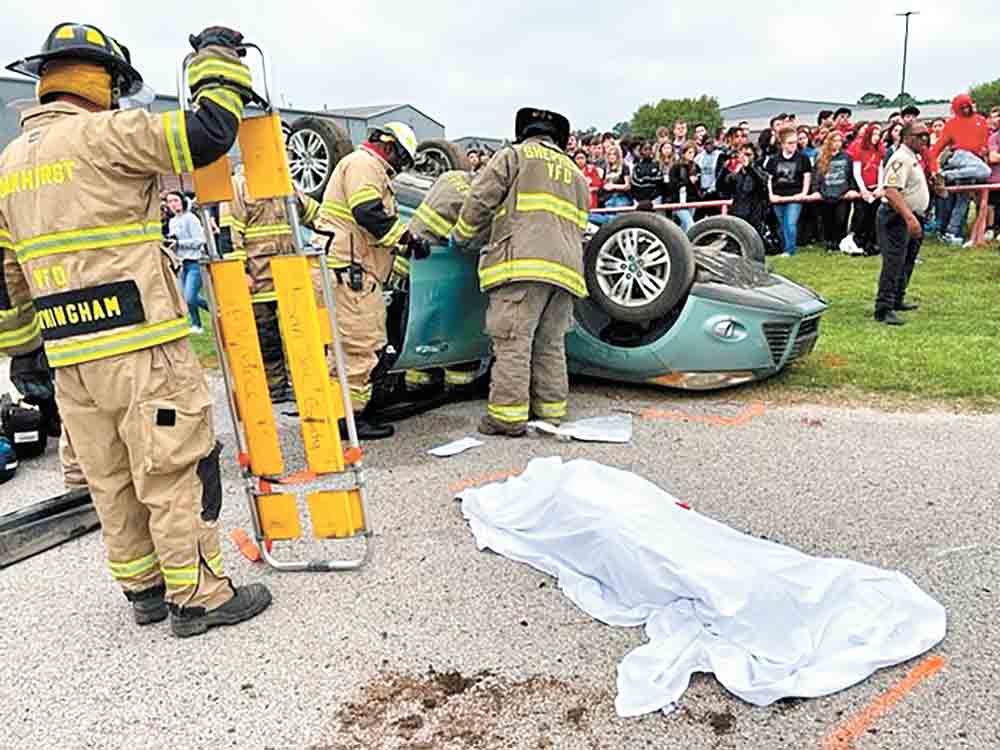 COLDSPRING — Coldspring-Oakhurst High School students were witness to a different, more graphic lesson in the mid-morning of April 13.

It was a scene out of the backlots of Hollywood — preplanned and well-orchestrated; a mock life-and-death scenario of what is in many cases the aftermath of driving while intoxicated.

The objectives of the event were to call attention of the realities of DWI and the effects on the individuals and family members, and how a community can organize, equip and train volunteer first responders to respond to tragedies.

Saving lives comes about as a result of the response by first responders, starting with the on-scene assessment, extricating and stabilizing victims, triaging to hospitals, and more.

A witness to the scene said, “I am amazed at the proficiency of these responding agencies, fire, ambulance, police, helicopter who are able to work seamlessly together.”

Coldspring-Oakhurst High School Assistant Principal Courtney Robison, one of the organizers of the simulation, said the intent of the exercise was to highlight the process that follows a crash, from the initial accident through the arrest.

That included subjecting the alleged DWI driver to a field sobriety test administered by a DPS trooper, transporting him to the San Jacinto County Jail for processing, and then to court where Assistant District Attorney Todd Dillon brought charges before Justice of the Peace Christina McGee for sentencing.

“As heart wrenching as DWI is, I should like to point out that on average, 11 teens die every day in fatal texting related car accidents, compared to the average of 8 deaths a day from DWI related accidents,” Robison said. “Parents need to be aware of these frightening statistics.”