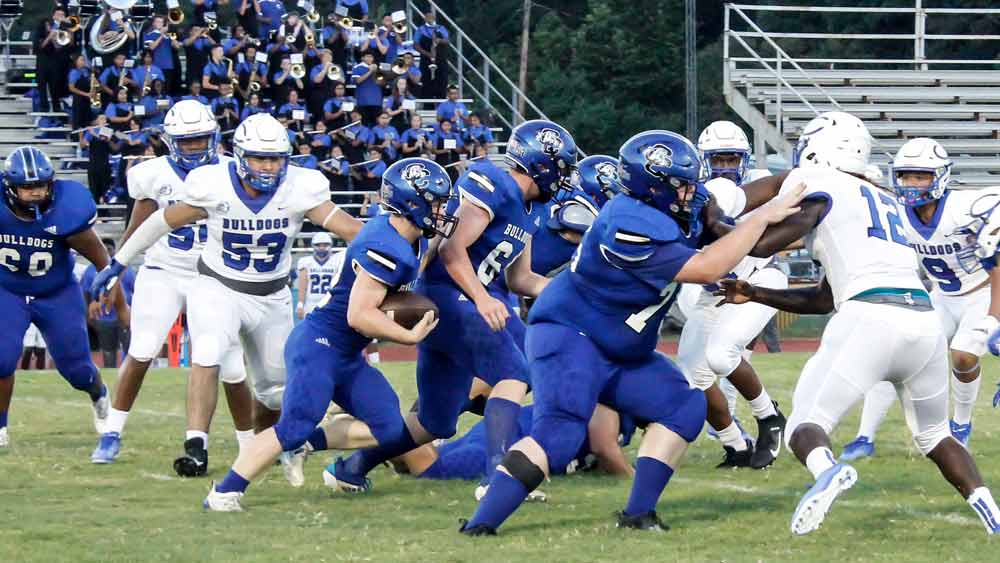 Kadyn Burke waits behind his linemen as they push forward. (Photos by Albert Trevino

The Corrigan-Camden Bulldogs earned a 35-14 victory against the rival Bulldogs from Crockett in the season opener Friday.

It was a competitive match for most of the night, but it was Corrigan’s hustle and physicality in the second half that outlasted Crockett as they pulled ahead.

The matchup featured a strong performance from junior quarterback, Christian Guzman who had Corrigan’s offense in sync this time around versus Crockett.

“[Guzman] is no doubt the driver of what we are trying to do offensively and as a team.” said Ratliff. “He is the prototypical quarterback in the fact that he is very cool, calm and collected...It took him a year to learn what we were trying to do and being able to command the offense. You saw tonight, what a difference 365 days makes.” 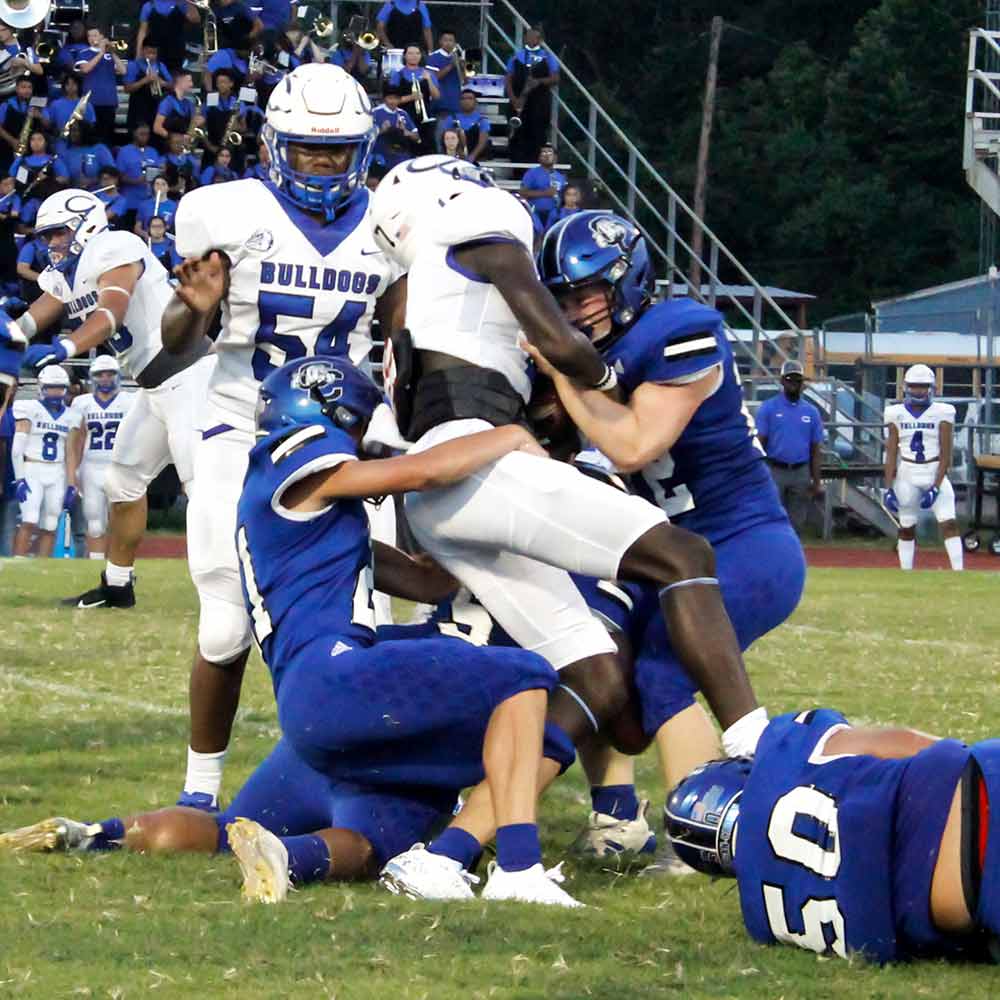 “Defensively, we swarmed to the football and played great pass defense against what I thought was a great quarterback [in Collins .] He is a college-level quarterback.” Ratliff said. “I could not be more proud of the heart and fight of every single player of this team.”

Corrigan’s rush offense developed an early rhythm on the opening possession, reaching Crockett territory. However, this was stopped with the team’s first turnover on a fumble by senior running back Deveion White.

Unable to capitalize, Crockett’s offense stalled near midfield on its first possession.

Going into the second quarter, Corrigan put together a drive first sparked by a reverse to senior JaVarion Williams, then a long keeper by Guzman to midfield.

Junior running back Anthony Harrell later helped finish the job with a short touchdown run on third and goal. Along with the extra point kick by junior Pablo Jimenez, Corrigan took the 7-0 lead early in the second.

Corrigan’s defense quickly put Crockett next possession to rest with a big stop and turnover on downs.

The following drive for Corrigan had a few negative plays, but was continually answered back with offensive sparks.

This included the toss to Williams on fourth down that went 21 yards for a touchdown to help extend the lead for Corrigan 14-0 with a little over two minutes in the half.

Those two minutes were more than enough for Collins to connect on a long pass inside Corrigan territory, then make a 20-yard touchdown pass to senior receiver Tyrek Houston to make it a one-score game at halftime.

Crockett’s offense came out aggressive to start the third quarter. On the first play, Collins passed up the middle to senior Crowley Pierce, who took it all to way to the redzone.

Shortly after, Collins found a running lane to go 11 yards for the game-tying touchdown early in the third. 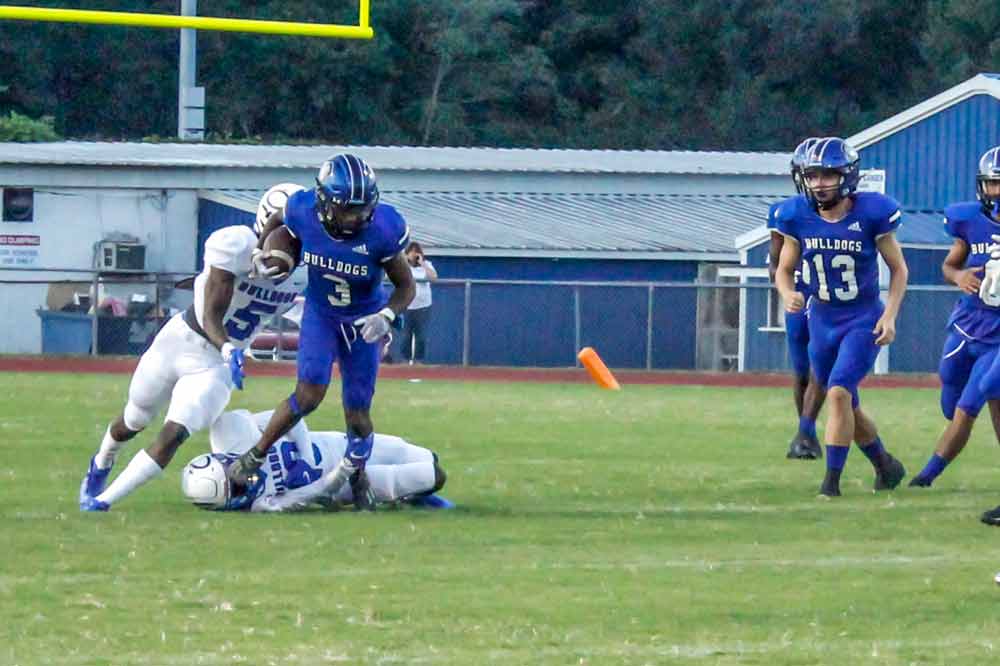 Corrigan responded on the following drive with Harrell finding room along the right sideline to sprint 69 yards for the touchdown. That extra point was blocked, but Corrigan took back momentum and never let go.

Late in the third, Guzman scored another six on a long keeper as he broke tackles and stretched the ball past the goaline. This extended the lead 26-14 for Corrigan.

Backed into their own territory in the fourth quarter, Collins threw a short pick right into the hands of Corrigan junior Morgan Rayburn. This set up a short field for Corrigan to seal the game on another rushing touchdown by Harrell.

After Crockett turned over the ball again, Corrigan managed to top of the night with a successful field goal attempt by Jimenez within the final seconds.

Ratliff is determined to carry his team’s energy into next week as he continues to emphasize the heart and tradition of Corrigan-Camden football.

The Bulldogs will travel to Centerville for their next game this Friday at 7:30 p.m.