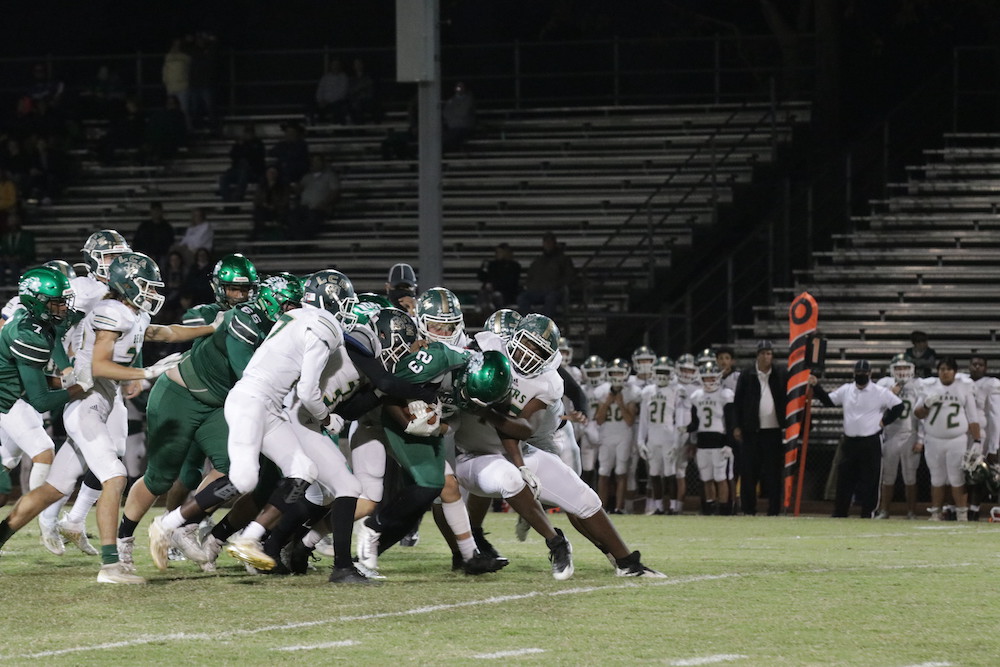 PHOTO BY JO’HANNAH PROCTOR Livingston running back Lynn Johnson (23) runs with several Little Cypress-Mauriceville defenders hanging on him trying to bring him down Friday night.

LIVINGSTON - The Livingston Lions ran their district record to 4-0 by defeating the Little Cypress-Mauriceville Bears 18-6 on Senior Night in Lion Stadium. The win sets up a District 10-4A Div. I showdown in Huffman for the final regular season game, as the Hargrave Falcons are also undefeated.

For the first time since 1963 when Corky Cochran was taking handoffs, the Lions (7-2, 4-0) have won seven consecutive games in a season. It is an accomplishment for a school that had won just two games the three prior years combined. A win on the road Friday will have the school vaulting from worst to first.

“The past two years have been rough,” senior linebacker Tanner Orn said after playing his final game at Lion Stadium. “My sophomore year, we were 0-10 and last year we went 2-8, so it kind of feels surreal right now, winning seven straight. We are going into the district championship undefeated and it really doesn't feel real. This is it for me. I'm playing out here 100% as long as I can. I just love football and I'm just trying to play.”

Livingston was successful on the ground, led by junior Lynn “Tank” Johnson, who had 18 carries, 145 yards and two scores. Ja’Marri Green added 56 yards in 11 attempts. In all, the Lions ran for 238 yards.

The story of the year for Livingston has been its defense. After holding the Bears to six points, they have now surrendered an average of 8.5 points per district game.

Orn said a lot of the improvement for the defense is mental and emotional.

“It is the attitude, 100%,” he said. “Everyone is in there playing for the person next to them, you know? In past years, it wasn't like that. Now it is. Everybody has the same goal.”

The visiting Bears also performed well on the defensive side. The Lions were unable to convert many drives into points.

“They played defense,” Livingston coach Finis Vanover said of LC-M. “They were well-prepared, they moved people around on the chessboard that we haven't seen moved to those spots. They attacked us and got physical and we didn't answer back a couple of times real good. We figured it out enough to put points on them.”

Livingston scored on its first drive of the game, going 10 plays in six minutes and ending in a Damian Ruiz 1-yard sneak. A missed extra point had the team chasing two-point conversions the rest of the night.

Much the same as the Lion offense saw early in the season, the Bears brought pressure from both ends to contain rollout passes and runs outside the tackles.

“They brought two people, and then they put their big boys out wide that we haven't seen all year,” Vanover said. “We were in a bind and we didn't handle it well. We have to get that smoothed out. I am very disappointed in our red zone offense. We had two possessions before the half and came away with nothing. They stopped two two-point conversions and that is just unacceptable.

“It is also a tribute to their defense. It's what I was afraid of all week. If they get juiced up and get rolling and get confident, they would make some big offensive plays. I didn't want those skill guys out there, because I knew they I would throw it all over the field. I didn't think they could run it on us. They have some playmakers and they can go the distance in a hurry like they showed.”

The time they went the distance was in the third period on a 78-yard slant to Brendon Pollock, cutting the lead in half at 12-6.

Before that, Johnson sprinted in from 16 yards with 1:53 to go in the first half, capping a 14-play drive to put the Lions up 12-0. The final score of the game had the junior tailback outrunning the defense again, this time in the third quarter on a counter for 59 yards.

Friday will decide District 10-4A Div. I. The Hargrave Falcons are 9-0 on the season after taking down Vidor 15-13 on the road. Both teams enter the clash with 4-0 district marks.

“It is what you play the sport for,” Vanover said. “It is what everybody talks about from Aug. 3 until now — playing for the championship. Everybody snickered and snarled about the old Livingston Lions and here we’re fixing to be two undefeated teams playing game 10 for the district championship. What more can you say about a group of boys that have stuck it out, believed and achieved like you are supposed to do?”