Doug Boone has been at Onalaska only two weeks, but the girls offseason basketball program has been in full swing since his arrival. In from Slaton, a short drive southeast of Lubbock, Boone is in his 30th year of education. Many of those seasons were spent in East Texas and Central Texas.

“My son graduated from high school last year, so my wife and I kind of had that freedom,” Boone said of his latest move. “My oldest daughter has two daughters and we didn’t expect her to have another one until three or four years down the road, but we were wrong. We got a FaceTime surprise and she is having our third granddaughter.”

Boone and his wife are both familiar with East Texas, both from the Lufkin area. The grandchildren will also call that portion of the state home.

While location plays into his choice of Onalaska, athletic director Nick Tyerman’s program was also a draw.

“He was wanting someone that would build the program — not just basketball, but the overall girls program, which I love to do that,” Boone said. “Girls coordinator is not just a title to me, it is something I am passionate about — to help every sport be successful. The school has had some tradition and some success in the girls’ programs. It is high academic here, and that is another thing that is important to me. Having smart players, you get a chance to do a lot and achieve a lot.”

When he began coaching, Boone said football is where his heart was. He then had two daughters and realized that there was rarely a strong advocate for girls and girls sports. 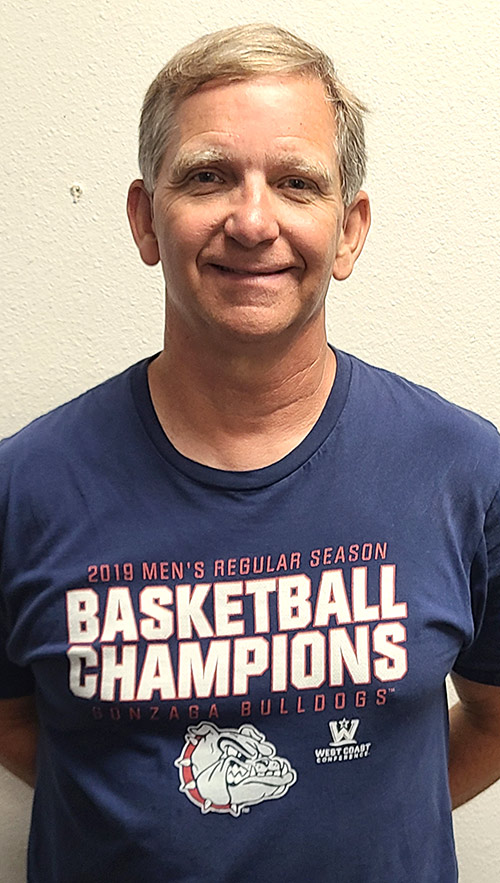 Doug Boone“When I started coaching my daughters and started coaching other girls, I just really found a niche there. I have loved it and have had a lot of success because of the kids. That is why I am on this side.”

The initial impression of his new athletes is the abundance of youth.

“I think that someone told me that we may even only have two seniors in the athletic program on the girls side. Basketball-wise, I don’t think I have a single senior that I know of, unless I recruit more. It is a unique place, there is no football, so that is not where all the focus is. I am former football, so I get all that stuff. There is no reason why we shouldn’t be successful in basketball and sports like that.

“This is really pretty exciting to me, because I’ve got a really good corps of freshman girls that are coming up and I always project my eighth graders and some seventh graders. Right now, Mary Joy (Cariaga), A.J. Pinkert, Katie Boyce and Destiny (Lindley) — these girls will give us a good, older group with juniors and sophomores that will help us be solid. The great thing about these girls is they seem to be very coachable. I’ve got some young girls coming up and I don’t know how they are going to play into it, and I’ve got some girls that I’ve already talked to that weren’t playing before, but they are very athletic and I think they can help our program. It may be a completely different group of kids from what you’re used to seeing. We are strong at guard; I can tell right now, but we don’t have any really true bigs.”

Due to new UIL rules, that group is able to spend an hour in sport-specific workouts, as well as sessions for cardio and weights during the week.

“Basketball, most especially, is a sport that you cannot get away from for very long. You have to stay connected in some way, shape or fashion. We have had fairly good numbers, but I expect better numbers next summer. At the same time, you want to let them be kids. Give me June and we will play in leagues and practice basketball, and then I back off in July for them to go have fun.”

Expect the Lady Cats to run a new system when they take the floor for the first time. Boone is a fan of the packline defense and point zone defense, popularized by college coaches Dick Bennett and Dean Smith, respectively.

“I am a constant student of the game myself. I do want to see my kids and see what I have. I love running the packline defense. Depending on my kids, I have a couple of things that I feel comfortable with as a coach that I think, depending on my personnel, I can use to be successful. I am a big Villanova fan and Jay Wright fan, so I like running a lot of his four-out stuff (on offense). It doesn’t really matter the type of personnel that I have, regardless of where I have been, that seems to always work well with whoever I’ve got.”

The coach has a history of success. When he arrived at Center, they had won two games the year before and seven games the previous three years total. The team won 19 games and made the playoffs in his first year there, the first time that school had done so in 15 or 16 years.

“I give all the credit to the kids that I’ve coached, but for the 13 years that I’ve been coaching girls, I’ve only had one losing season as a head coach and that was this past year. That was a situation where it was a rebuilding — like a five-year rebuild. I kind of anticipated that, plus we had two of the top 10 teams in the state in 3A in our district alone. It is a different animal and girls basketball in West Texas. That is why you see them in the state tournament every year. Other times, I have averaged 20 wins a year and playoffs every year. I’ve had two final four experiences and I’ve had a lot of success. I don’t expect anything less here, and I want to help them get to that next point.”