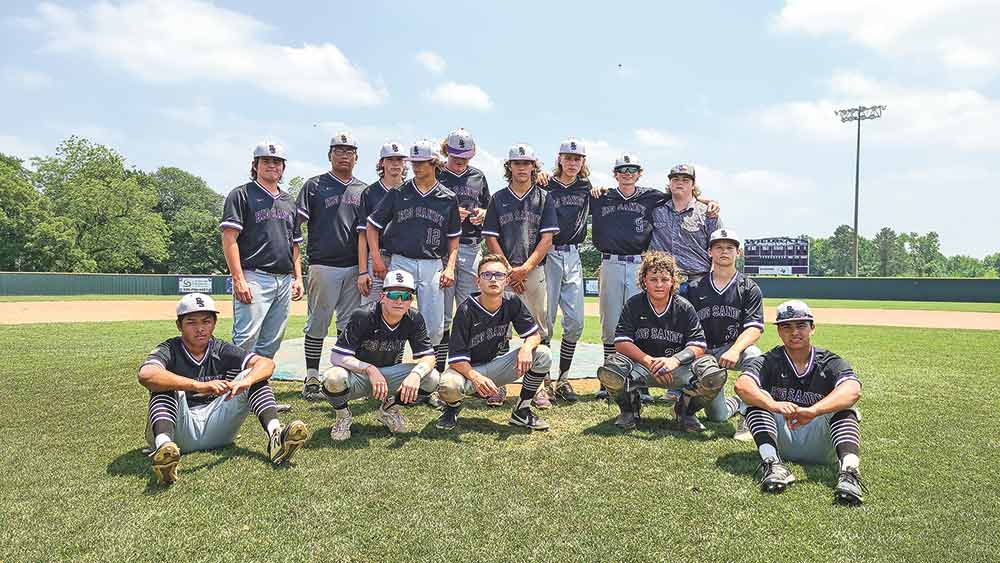 The Big Sandy Wildcats end the 2022 season as bi-district champions.

The Big Sandy baseball season ended Friday night versus what many consider the best team in Class 2A baseball. Shiner is ranked No. 1 in the state and has yet to lose a game this year. They defeated the Wildcats 10-0.

“They are legit; I expect them to make a deep run,” Big Sandy coach Blake Brown said. “They haven’t lost a game all season for a reason. That arm they had against us on Friday (Ryan Peterson), he was good. He did a great job against us and we struck out the most we had all season.”

The Wildcats collected only one hit in the game and struck out 14 times in just five innings.

The coach said he didn’t know what to expect coming into the 2022 season. There were some growing pains that came along with replacing three starters and five seniors from the previous year.

“I felt like the seniors that we had stepped up and the underclassmen all stepped up, really,” Brown said. “Having Adrian Thompson really solidified our defense.”

Thompson has been selected as the District 25-2A defensive MVP. He was able to play through all of the district schedule without an error and was a unanimous vote.

“Probably the most improved player in the district overall was Ethan Murphy. The kid was a standout at the plate. He batted over .500 for the year and .649 in district. He came on and nobody could get him out. He was the District 25-2A offensive MVP.”

The ‘Cats began the season with a tough non-district slate that would prepare them for district.

“We dropped a couple of games that we shouldn’t have dropped early. We were still trying to figure out our identity as a team where some of these new pieces were going to slot in. We didn’t have the basketball guys in yet and some of the guys that would be key players for us.

“That third tournament, we played over at (Little Cypress-Mauriceville). In the first game, we got absolutely blown out by LC-M. The second game, we went to West Orange and beat West Orange. The third game, we had Hemphill at LC-M and we’re down 5-3 and ended up coming back and winning that game 6-5. That game kind of propelled us into district. It was a big win for us and we got on a roll there all the way until Evadale.”

A large senior group contributed to the success of 2022. Seven in all will graduate Big Sandy High School.

“Adrian is a great kid and he is talking about wanting to go to the University of Oklahoma. Adrian is going to outwork everybody else. You can ask Coach Foster about him in basketball, he’ll just out-compete people.

“Ethan Murphy is a hard-working kid and not a better athlete than anybody, but the kid gives 100% down the baseline. He helped his team out a lot and was a great example for the underclassmen this year. Whenever I first started, Ethan was playing third base and we moved him to the outfield and he progressed out there really quickly. His bat never came along until this season. Him doing a 180 at the plate has been really impressive and he has worked so hard. I expect him to do really big things in college.”

Brown said Murphy and Trace Flores would be headed to Tarleton State.

“Trace has done everything I’ve asked of him the last few years. He played out of position for two years at catcher because we didn’t have anybody else. This year, we were able to move him back to his natural position and he really excelled at the plate and at second base. He was first-team all-district infielder this year.

“Kainey Alec is another one of those kids that developed over three years. He turned into a true ace for us. His ERA in district this year was a 0.396. He was a first-team all-district pitcher and the kid was just absolutely phenomenal in every game he threw this year. It’s going to hurt losing him for sure.

“Milton Hoffman ended up with first-team all-district outfield. He played out of position all year this year and is a natural first baseman. He played in the outfield and excelled. I think he had over a .400 batting average and wherever you put him, he is going to do his best.

“Brayden Young is another pitcher and first-team all-district as a utility player. He was our plug-and-play guy. Depending on whoever was on the bump was where Brayden was going to play. He literally played every position other than catcher this year. Losing a guy like that is going to hurt on the 2A level. He was above average in everything he did.

“Early in the season, Kaden Glover played quite a bit. He is the best teammate any of these guys could ask for. He is always doing everything that nobody else wants to do. He is a kid that would come in and run the bases for his teammates whenever they would get on base. I’ve had Kaden for three years, and to see his progress has been great.”

However, those are not the only losses. Brown will move on to an administrative position at Dayton ISD, meaning the Wildcats will have a new head coach next season. His assistant, Keegan Turner, has taken a job outside of education.

The coach feels that the district will be competitive once more in 2023, as West Hardin will be tough with many returning starters next year. Evadale returns District MVP Jackson Sylvester and he also thinks Deweyville will compete well.