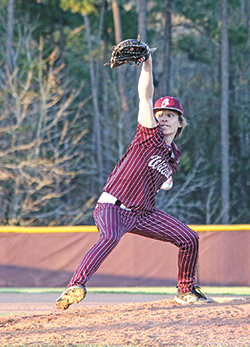 Brady Smith started the game on the mound for Onalaska.By Brian Besch
This email address is being protected from spambots. You need JavaScript enabled to view it.

Onalaska baseball was able to keep Friday’s contest close for a while, but a disastrous final inning gave Hardin a comfortable 14-2 win.

The Hornets started the game off with four runs in the first inning. Pitcher Brady Smith would then settle in and was more effective overt he next four-plus innings.

Hardin grabbed two more runs in the third, but Onalaska answered. Lucas Jackson walked and stole a base, and Aiden Roberts and Zachary Taylor were both hit by a pitch. With the bases loaded, Jackson scored on a wild pitch to make the game 6-1.

“We did well early on in the season. We had a couple of really positive tournaments that we went to and our kids have been hitting the ball really well,” Onalaska coach Cody Pinkert said. “We had one stretch where we had two games that we pounded out 21 hits in two games. We were really excited about that, but for whatever reason we are really struggling right now. We didn’t get a lot of hits against Anderson(-Shiro) on Wednesday and obviously we struggled again today. I’m not sure what the answer is, but we are going to get back to work next week and see what happens.”

The two teams each picked up a run in the fourth. Grant Thornton was beaned and then stole second. He would score on a fielder’s choice, just before a runner was caught between first and second in a rundown.

Up 7-2, the Hornets pushed seven insurance runs across in the seventh.

“The score is not indicative of what this team is capable of,” Pinkert said. “Anderson-Shiro was the district champions last year and they beat us 3-2 on Wednesday night and we competed the entire game. I think we just let this get away from us a little bit. Our district this year – I feel like there has been a lot of separation in the past. I feel like everybody has kind of clumped together this year. I think it is going to be a lot of everybody beating each other up and hopefully we can take advantage of that and figure out a way to get in the playoffs.”

The coach said hitting has been something the team could rely on, referencing the Cleveland tournament, where they collected 21 hits over two games.

“Hitting early on was a strength. Pitching has been a strength and our defense is probably one of the best groups that I’ve had. We struggled in that last inning (tonight) and made some errors, but I stand by it 100%. This is one of the best defenses that I have had at Onalaska in the past seven or eight years since I’ve been here. Sometimes we don’t have as much footspeed as I would like in the outfield, but that is OK. Our guys can play and I’m happy to have them out there. They get out there and work hard and that is all that I can ask for.”