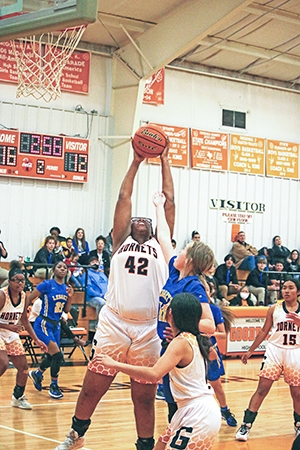 The Goodrich-Leggett rivalry was as tough as ever for three quarters Friday night, but the Lady Hornets finished the game in a big way to take a 64-37 home victory.

Goodrich held just a four-point difference at halftime, but doubled that by the end of the third quarter at 36-28. The last few minutes of the third would foreshadow what was to come. The lady Hornets erupted for 28 points in that last quarter, while holding Leggett to nine.

“At the beginning, we just wanted to play wild ball,” Goodrich coac Pinellafie Johnson said. “They wanted to play their game and I kept telling them that we aren’t going to do that. We’ve got girls that are wide open and all we have to do is pass the ball around and lay it off the glass. In the second half, that is what they did, because the first half was horrible. They were just rushing. We only passed the ball inside in the first half two times, because everything was just running down the court and putting it up. I told them that we have to play team ball to win this game.”

The Lady Hornet inside game made a large difference, as Latrina Morgan and Breya Passmore were able to find enough room in the paint versus the Leggett zone. Each collected 22 points to lead the team. Aralyn Angel added eight points for the home team and Arly Balbuena had six.

For Leggett, the outside shot kept the game close until the final eight minutes. Makelah Reeves-Nesmith had 11, Tamaera Henderson had 10 and Kylie Valderez nine. All but 10 of the Lady Pirate points came by way of the 3-pointer.

“We are standing around on offense at the 3-point line,” Leggett coach Terri Barlow said. “I only had one in trying to get a rebound. Everybody wants to sit outside. We especially didn’t take care of the ball like we should have. We played a totally different game from what we did Tuesday night. We just plain and simple got outhustled. We were down by four at halftime and lost by almost 30 points. We didn’t hustle and we kept throwing the ball away.”

On Tuesday, Leggett played Burkeville and took home a victory. The are now 1-4 in league play.

Goodrich improves to 2-2 in district, with Zavala and Chireno occupying first and second in 28-1A, respectively. Johnson feels as though her team is improving and that the second half of district will be “a different ballgame.”