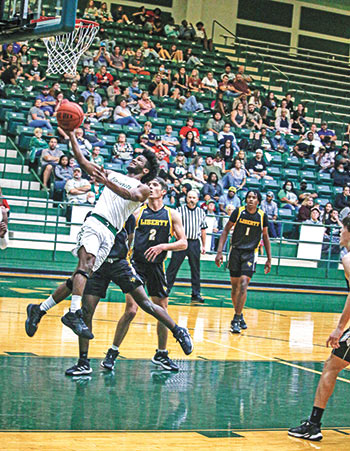 Julian Gardner puts up a shot as he is fouled.Brian Besch

The Livingston Lions erased a disappointing first half in the third quarter to claim the district opener 45-35 Friday over the Liberty Panthers.

A second quarter to forget put the Lions down nine points at the half, scoring just one long-range bucket in the eight-minute span.

“The first half, we didn’t play with much energy,” Livingston coach Calvin Phillips said. “Some of them got (mad) at me at halftime. I told them, ‘I told you guys that you had to take this thing seriously, because these guys will come out and play. These guys are better than us right now, just from the way we played the first half.’ They got upset and whatever I said got those claws to come out.

“I really don’t know what it was that had the energy level so low. I couldn’t figure it out. We weren’t hitting any shots. We weren’t patient enough – that was something else we were doing – and we didn’t have a good shot selection. We have to be patient, we have to have good spacing, and we need a good shot selection and to manage the clock. That’s the only way we are going to win.”

Thefts by the Lion defense kept the margin within reach and allowed for a comeback. The third quarter was a 22-7 Livingston advantage filled with steals, good passing, getting to the rim and deadly outside shooting by William Dault. The tall shooter had three 3-pointers in the quarter, finishing the game with 17 to lead everyone. Livingston took the lead for good at 29-28 at 4:14 in the third period.

“Being that they showed some resilience in the second half and fought through some adversity and played like they had to play, it meant a lot to me,” Phillips said. “I knew Liberty was going to be pretty tough. They play hard too and they have some pretty good shooters.”

The coach said there may have been some rust from not playing a game Tuesday. A game scheduled with New Waverly had to be cancelled. Last week, the Lions were playing their best basketball of the year, defeating both Coldspring and Aldine.

Adding to the Lions’ total was Jayden Randolph with eight points, Jacob Byrd with six, and Jontavian McNeal and Brian O’Neal with five each. Kaden Nolan was the top Panther with 13 points.

The Lions will be in Woodville next and return home Jan. 7 for an important district match with Hamshire-Fannett.

“If we play as we are capable of playing and like smart teams are supposed to play, we can play with anybody on the schedule. If we don’t, we’re going to have problems. We just have to play smart basketball and don’t beat ourselves.”