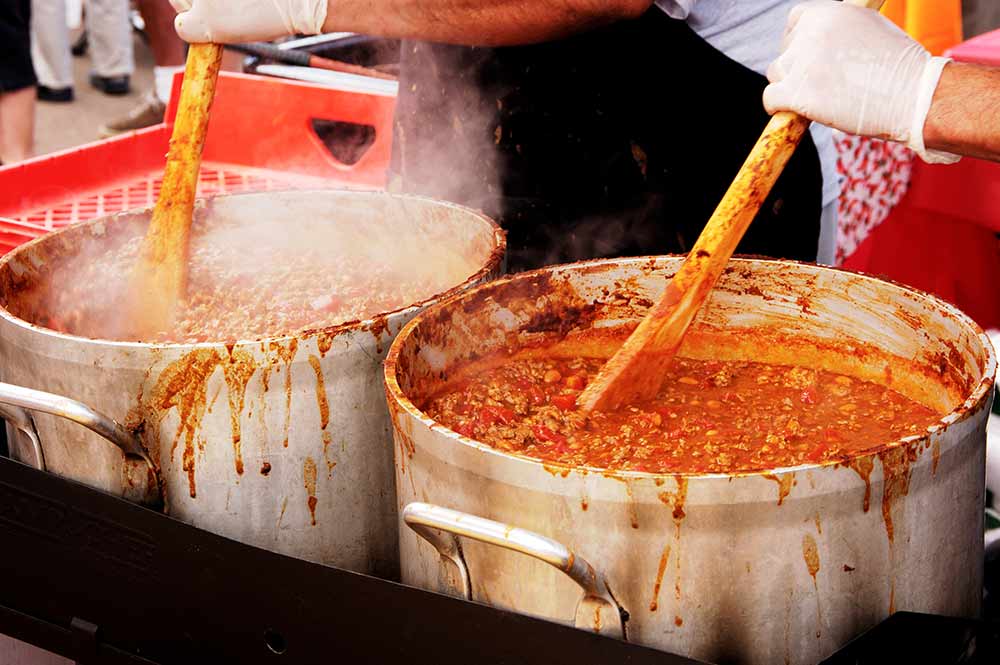 The 2nd annual Rodeo Kickoff, Cookoff and Barn Party, an all-day festival to raise funds for the Polk County Youth Rodeo Association, is slated for 10 a.m. to 8 p.m. June 18 at the Barney Wiggins Memorial Fairgrounds Arena. An arena style concert is slated for 5 p.m.

“We raised a little over $5,000 last year. We would love to raise more this year. It would mean a lot to the youth,” Tim Martin, event organizer, said.

The barbecue cookoff will be sanctioned by the Lone Star Barbecue Society and there will be a 60% payout based on the number of entries. For entry forms, contact Tim at 936-425-0474.

Sponsorships are also still available. To be a sponsor contact Tim or Sheila Ann at 936-425-0474. 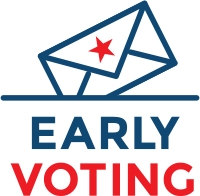 The six voting locations are:

Early voting ended Tuesday for the Saturday elections. A total of 982 ballots were cast — 478 in Livingston, 409 in Onalaska and 95 in Corrigan.

Proposition Number 1 (SJR 2) SJR 2 proposes a constitutional amendment authorizing the legislature to provide for the reduction of the amount of a limitation on the total amount of property taxes that may be imposed for general elementary and secondary public school purposes on the residence homestead of a person who is elderly or disabled in order to reflect any statutory reduction in the maximum compressed rate of the maintenance and operations taxes imposed for those purposes on the person’s homestead from the preceding tax year.

The proposed amendment will appear on the ballot as follows: “The constitutional amendment authorizing the legislature to provide for the reduction of the amount of a limitation on the total amount of ad valorem taxes that may be imposed for general elementary and secondary public school purposes on the residence homestead of a person who is elderly or disabled to reflect any statutory reduction from the preceding tax year in the maximum compressed rate of the maintenance and operations taxes imposed for those purposes on the homestead.”

Proposition Number 2 (SJR 2) SJR 2 proposes a constitutional amendment increasing the amount of the residence homestead exemption from property taxes for public school purposes from $25,000 to $40,000.

The proposed amendment will appear on the ballot as follows: “The constitutional amendment increasing the amount of the residence homestead exemption from ad valorem taxation for public school purposes from $25,000 to $40,000.” 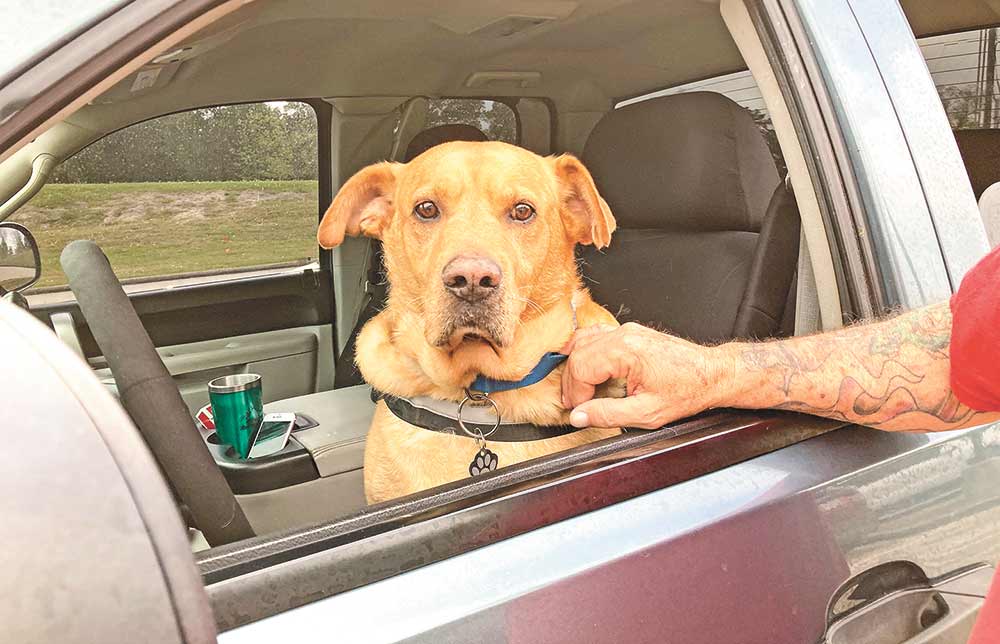 Duke patiently waits his turn to be neutered during the recent spay/neuter event held by Animals Lives Matters, a local non-profit organization. Twenty-seven animals were spayed or neutered at the event held Saturday in the parking lot of the Polk County Sheriff’s Office. The next spay/neuter event is slated for May 7 at the Dunbar Gym but is already completely booked. There is a sign-up sheet in the lobby of the Polk County Sheriff’s Office to get on  a waiting list for a future spay/neuter event. The $25 fee includes the spay or neuter, all vaccines and a microchip.  Photo by Amy Holzworth

“The club is in Houston, but it has a wider service area. It does unbelievable things for our first responders. Their reach is long and wide and deep,” Rotarian Trina Fowlkes said of The 100 Club, as she introduced its executive director, William F. Skeen, who presented a program to the Rotary Club of Livingston recently.

Skeen, a criminal justice graduate of Sam Houston State University, served as a state game warden for 27 years and has served as executive director of The 100 Club for the last five and a half years.

Skeen said The 100 Club is a 32,000-member non-profit organization that began in 1953, which provides financial support to the dependents of law enforcement officers and firefighters who are killed or seriously injured in the line of duty in 32 counties surrounding Houston. 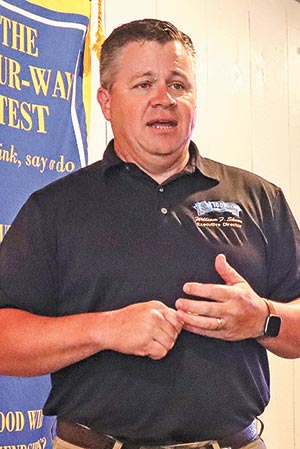 William F. SkeenHe said it was founded by a group of five men that saw the need to support the families of Houston police officers killed in the line of duty. The men were Leopold L. Meyer, Ray R. Elliot, R. H. Abercrombie, William A. “Bill” Smith and Jim “Silver Dollar” West. They reached out and motivated 100 people to contribute $100 each toward the mission. Thus, The 100 Club was born.

For nearly 50 years, the organization focused on police officers, but in 2001, The 100 Club expanded to support firefighters, Skeen said. However, as new counties have been added and new public servants have been supported, the mission has always remained the same.

“What do we do?” Skeen asked. “Within 24 hours of hearing (of the death), we present a $20,000 check to the family. Our goal is to eliminate the debt of the family. Because we’re a non-profit, we can go in immediately.

“We’ve helped over 2,000 families since 1953. Over 200 dependents are still being assisted. Over $300,000 is the average assessment. Collectively we’ve raised about $46 million,” Skeen said, adding that there have been 25 line of duty deaths during the five and a half years he’s been there.

The 100 Club added 14 counties to its coverage area in 2014 and Polk County is one of the counties that was added.

“Texas leads the nation in line of duty deaths and Harris County leads Texas. We’ve already exceeded in the first four months of this year what we’ve lost in entire years past,” Skeen said. “We’re the largest 100 Club in the nation and it’s all based on our membership what we’re able to do for these families.

One hundred percent of the 100 Club’s funding comes from donations from individuals and businesses. With the funding received, the 100 Club financially supports the dependents of heroes killed in the line of duty by paying off their home loan, vehicle loans, credit card debt and assisting with providing a college education for their children. They fund scholarships that allow officers to further their education in criminal justice. The also provide life-protecting equipment such as bulletproof vests, radio equipment and armored personnel carriers.

Additionally, they provide funding to replace all service animals who are killed or seriously injured in the line of duty for law enforcement and fire departments within their coverage area.

Skeen said The 100 Club has also funded the HPD Tactical Village, a state-of-the-art training facility. He said they’ve bought three vans during the time that he’s been there for officers that have been shot and paralyzed.

“I wish there wasn’t a need for it (The 100 Club) but unfortunately law enforcement is getting more and more dangerous,” Skeen said.

There are different tiers of membership, starting at a regular annual membership for $100. “I think we have 60 members right now in Polk County,” Skeen said, adding, “We’re probably one of the best-kept secrets in Houston.” To learn more about The 100 Club, or to join, visit the100club.org.

Partnering with the community to support local charities

Polk County Cares is already gearing up and working hard to make its July 2 Fish Fry every bit as successful as its crawfish/shrimp boil in February which grossed $83,882.23, funding which will stay in Polk County to assist local non-profits.

“I didn’t tell anyone, but I was hoping for $80,000, but with COVID still going on, wasn’t sure. We blew that out of the water, so I’m really optimistic about next year’s crawfish/shrimp boil which is scheduled for Feb. 11, 2023,” Toni Cochran-Hughes, president of the board of directors of Polk County Cares, said recently during a check presentation ceremony. Toni, along with several other board members of Polk County Cares, presented checks to F.A.I.T.H. Military Support Group and Center of Hope Cancer Support, with each organization receiving a check for $30,855.33.

Polk County Cares, a 501(c)3 organization, is putting community donations to work. Its purpose is to raise funds to be distributed to qualifying non-profit organizations within Polk County. Toni and her husband, Scott Hughes, created the organization together in 2021. And while some may think its creation must have hit the ground running to raise those kinds of funds, it’s actually a labor of love that’s been 10 years in the making, raising about $500,000 over the course of those 10 years.

“In 2012, Lisa Mayhugh, my best friend, was diagnosed with breast cancer. Lisa was director of the First United Methodist Church Treble Makers Children’s Choir, so I started the Treble Makers Relay for Life team and we had our first crawfish/shrimp boil in 2013,” Toni said. The crawfish/shrimp boil became an annual event, growing and evolving a little more each year.

“In 2018, we were still raising funds for Relay for Life, but after much prayer, Scott and I invited F.A.I.T.H. to join our fundraiser,” Toni said.

F.A.I.T.H. Military Support Group (Families And Individuals Thanking Heroes) is a group of volunteers that gathers each month to pack care packages to send to military personnel, each with some tie to Polk County, to provide encouragement and support. The organization has shipped more than 23,000 care packages to the troops since its formation in 2006 and has only missed two months of sending packages – once when Hurricane Ike came through Livingston and once during the COVID-19 pandemic due to the shortage of supplies.

“We’ve always wanted to keep funds local and support local cancer patients, so I got with Jean Binns about the Center of Hope Cancer Support. Scott and I prayed again and asked Center of Hope Cancer Support to join us in 2019. My gift and grace is I can raise money, and I told Jean, ‘If you can do the other, let’s do it,’” Toni said, adding that Polk County Cares is structured similarly to United Way.

“We understand the importance of being a good steward of the community’s donations. Therefore, it is our responsibility to learn as much as we can about the organizations,” Toni said of the strenuous application process. Application packets may be picked up at her office at 300 N. Washington in Livingston. Included in the packet are the criteria to apply for funding. Polk County Cares meets quarterly to review and distribute funding, which is limited to local non-profits with all funds staying local.

“Scott and I have wanted to help local charities. We formed Polk County Cares so we could partner with the community to support the local charities,” Toni said. “We look forward to learning more about the local non-profit organizations and understanding how we can help make a positive impact within the Polk County communities.

“We’re working on the website. It will be up soon and will have a list of our charities,” Toni said. Until then, Polk County Cares has a Facebook page that may be liked and followed. For additional information call Polk County Cares at 409-268-6804.