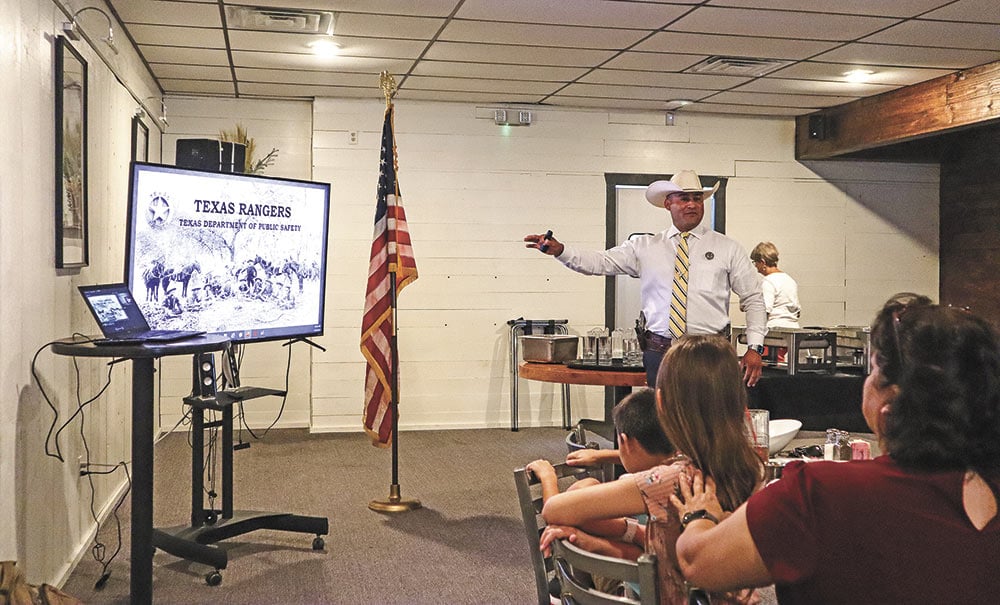 Texas Ranger Eric Lopez presented a program to the Rotary Club of Livingston Thursday. Having grown up in the Rio Grande Valley, Lopez served in the U.S. Marine Corps, earned a bachelor’s degree in criminal justice from Northwest State University and is presently pursuing a master’s degree in criminal justice from Lamar University. He worked for the Texas Department of Public Safety in New Caney, was promoted to criminal investigations in Houston, worked with the FBI for a while and was promoted to ranger in 2016 where he was stationed back in the

Rio Grande Valley before heading to East Texas to serve as ranger for Polk and San Jacinto counties.

Lopez explained that the organization that evolved into the Texas Rangers was formed in 1823 before Texas was even a state. He said Stephen F. Austin began establishing settlements in what was then Tejas and that these settlements were often raided by Comanche, Tonkawa and Karankawa Indians. Austin asked for “10 men … to act as rangers for the common defense.” Ten guys volunteered. Each man was provided a horse but that was all. They had to provide their own weapons.

Lopez said that following the Battle of Gonzales, Battle of the Alamo and Battle of San Jacinto, Texas officially gained independence from Mexico on April 21, 1836. Texas was a nation now and the Texas Rangers continued to protect its new citizens.

He said there are approximately 160 Texas Rangers and that the state is divided into six companies and that he serves in Company A.

Lopez said it is an agency that cannot be disbanded and that the rangers have handled many different types of crime over the years, from cattle rustlers to gambling, narcotics and riot suppression. He said at the turn of the century the rangers tried to maintain order out of chaos and that they are still focused on preserving the people and protecting them. He said the Texas Rangers are heavy on character, integrity and reputation and are trusted to investigate the most serious things.