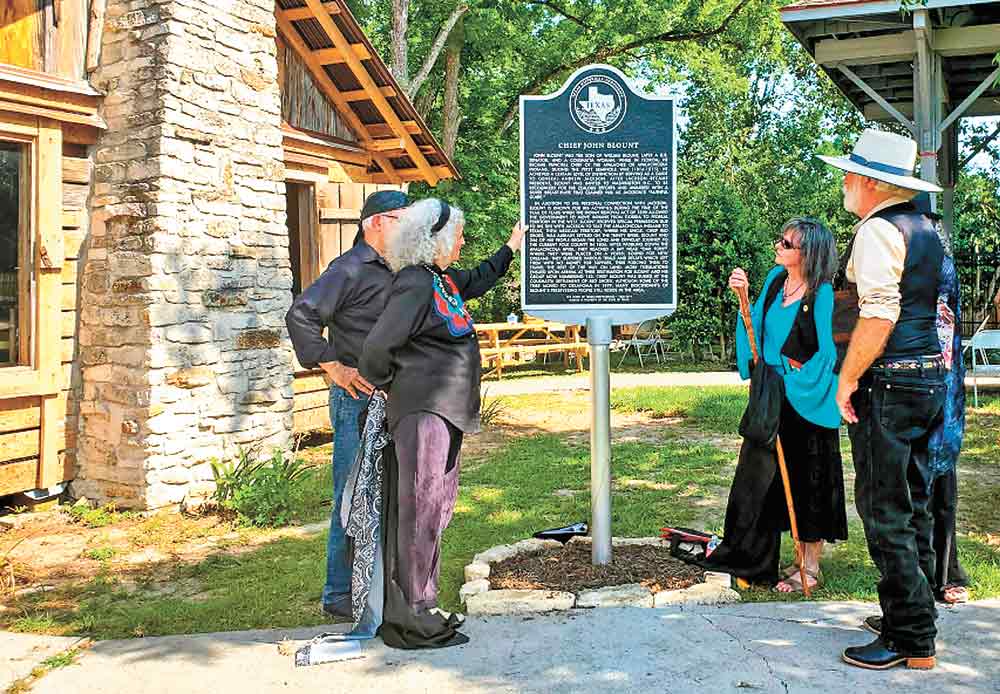 Descendants of Chief John Blount and their spouses admire the historic marker honoring him that was unveiled and dedicated Sunday at Heritage Park in Livingston. Blount was chief of the Apalachicola Band of Creek Indians that settled in Polk County in 1834. One of Blount’s sixth generation descendants was inaugurated as new chief of the tribe during a ceremony Sunday. (l-r) Eugene LeBeaux, Gleni Tai Blount, Chief Cynthia Healing Woman Tune Murphey and Michael Martin Murphey. Photo by Emily Banks Wooten

Sunday was a day of education and celebration of Polk County history that began with the presentation of “One Feather: Walks in Two Worlds,” a musical production featuring Singer Songwriter Michael Martin Murphey at Across The Tracks Live Music Venue. It was followed by a visit to the newly restored Jonas Davis Log Cabin at Heritage Park and the dedication and unveiling of a historical marker for Chief John Blount. The culmination of the afternoon was the inauguration ceremony for Chief Cynthia Healing Woman Tune Murphey, the new chief of the Apalachicola Band of Creek Indians.

Located in the 500 block of West Church Street, Heritage Park is home to the Jonas Davis Log Cabin, the W.T. Carter and Bro. Locomotive No. 5 and Heritage House, a restored Victorian home. The park and its attractions are owned, operated and maintained by the Polk County Heritage Society.

In recent years the cabin had fallen into disarray, primarily due to the deterioration of its roof which had been taken over by resurrection fern. The Heritage Society had attempted to raise funds for the rehabilitation of the cabin, even attempting to crowdfund through an account on GoFundMe, an online fundraising platform.

“This has been a long time coming. We had just started with a GoFundMe thing, and we’d had some people who donated the first few days and then we got a phone call from Bob Smith asking what we were doing. Molly (Anderson) and I went to his office and met with him, and he said The Smith Family Foundation wanted to fund it and I mean fund it,” Ruth Hollenbeck said.

Jonas Davis, for whom the log cabin is named, was one of the last members of the Pakana Muskogee, Apalachicola Band of Creek Indians to reside in Polk County. Jonas and his wife, Hortense, built the log cabin around 1833 on a bluff overlooking Kickapoo Creek. The cabin was donated to the Polk County Heritage Society in 1980 and moved to its present location in Heritage Park. Jonas Davis was a descendant of Chief John Blount for whom the historic marker was unveiled and dedicated. The inscription on the marker reads:

“John Blount was the son of William Blount, later a U.S. Senator, and a Coushatta woman. While in Florida, he became principal chief of the Apalachee or Apalachicola Indians. During the first Seminole War (1814-1815) he achieved a certain level of distinction by serving as a guide to General Andrew Jackson. After Jackson became president, Blount was invited to Washington, D.C. to be recognized for his zealous efforts and awarded with a silver breastplate that claimed him as Jackson’s ‘faithful guide.’

“In addition to his personal connection with Jackson, Blount is known for his activities during the time of the Trail of Tears when the Indian Removal Act of 1830 allowed the government to move Indians from Florida to federal territory in the west. Blount received special permission due to his ties with Jackson to take the Apalachicola Indians to Texas, then Mexican territory, where his uncle, Chief Red Shoes, was already settled on the Trinity River. They reached a bay near ‘Oak Point’ where they were placed on a vessel bound for New Orleans. They suffered various trials and delays which left them with no money for supplies, thus forcing them to travel the rest of the way on land. More tribulations ensued upon arrival at their destination for Blount and his group now numbering 152. Chief Blount was buried at the Coushatta settlement of Red Shoes. Although some of the tribe moved to Oklahoma in 1899, many descendants of Blount’s persevering people still reside in the area.”

Knowledge of the marker inscription provides a nice introduction to ‘One Feather: Walks in Two Worlds’ by Gleni Tai Blount, the musical production featuring Michael Martin Murphey that is about the story of Chief John William Blount, or Lafarthga, “The Leader.” It is based on the research and writings of Dr. Mary Six Women Blount, sister of the composer. Gleni Tai and Dr. Mary Six Women are sixth generation descendants of Chief John Blount. In the production Murphey portrays both Chief John Blount and Sam Houston.

Gleni Tai is a singer and composer in the commercial and pop fields, an international opera singer and presently serves as a celebrity vocal coach to numerous recording artists in Hollywood. In addition to composing the production, she also played the piano and provided vocals. Her husband, Eugene LeBeaux, a master of brass, played trumpet and trombone for the performance as well as providing vocals. In addition to recordings and live concerts, he also does studio and live work in both Dallas and Hollywood.

In scene one, Houston’s soldiers, though tired, are still celebrating their winning battle against the Indians as they jubilantly brag in a song about their great ability as soldiers, having finally beaten the Indians in the Second Creek War.

Scene two is Houston’s encampment for the Second Creek War. Regimental commander under General Andrew Jackson, Houston has been in close contact with Jackson’s best scout, Chief John, during many battles. Houston arrives to salute the brave soldiers, asking as to the whereabouts of the chief. He describes the great scouting talents of his best scout and close friend, Chief John, in words and song to the regiment. He knows that to go on the ‘trail’ would be almost certain death and wants to offer an alternative to help him out with the Texas Revolution.

Scene three portrays Houston, as president of Texas, reflecting on Chief John’s story. He describes the chief’s difficulties being a half-blood from both the educated world of the white man and the spirit world of the Indian. Remembering the chief’s song, he assumes the character of the chief and sings. A dream visit from the chief’s mother is recalled, helping the chief to decide whether to go on the Trail of Tears with his clan or to accept Houston’s offer to come help him in another battle, thereby taking his clan to Texas to battle once again.

“Chief John Blount left Blountstown, Fla. after the Creek treaty with the Apalachicola Band in 1832, the first Trail of Tears. He was told to go west. He traveled to New Orleans to collect their treaty payment of $13,000, then planned to go to Texas and up the Trinity River to Polk County. He went to the Indian Agent’s Office and received the payment and as soon as he came out, was arrested and put in jail, accused of stealing the money. He was released from jail and fined $13,000, leaving him penniless. He made it to Texas, up the Trinity River to Polk County and within three days died of cholera having contracted it while in jail. Some of the Apalachicola Band went to Oklahoma and some stayed in Polk County in East Texas. That is our path to current times,” Gleni Tai said.

“This meeting is a preview of what we’d like to bring to Livingston on a yearly basis – a fully-cast, fully-orchestrated musical pageant and festival of your history,” Gleni Tai said.

Michael Martin Murphy commented on what an honor it has been to him to be involved with this project.

“I’ve been an activist for Native Americans my whole life and I don’t have a drop of Indian blood,” he said. “Chief John Blount was what they cruelly called a half-breed. John was an educated man and a successful businessman and a family man. He decided to save his family by joining the government side in the Seminole Second War.

“Chief John wore one feather but walked in two worlds. Lafarthga, his Indian name. His mother was an Indian and gave him knowledge of nature and spirituality. He came on a whaling boat from Florida to Texas then came up the Trinity and died a few days after getting his clan safely to Polk County, Texas. What would you do had you been in their moccasins?” Murphey asked, adding, “We hope that a movement will grow in Livingston and throughout the State of Texas.

“You’re probably wondering why I took this story on as I did …” Murphey said as he introduced his wife, Cindy. Cindy is Cynthia Healing Woman Tune Murphey, who just minutes later would be inaugurated as the new chief of the Apalachicola Band of Creek Indians.

“I give thanks for this opportunity and this honor. I give thanks for these people that are here today. I am most proud to be the sixth generation here today, representing that heritage continued with steadfast perseverance and strength,” Chief Cindy said following her inauguration.

The Polk County Heritage Society is a 501(c)3 non-profit organization dedicated to the preservation of local history. Donations may be made by sending checks to P.O. Box 1914, Livingston, Texas 77351. To learn more, email This email address is being protected from spambots. You need JavaScript enabled to view it..