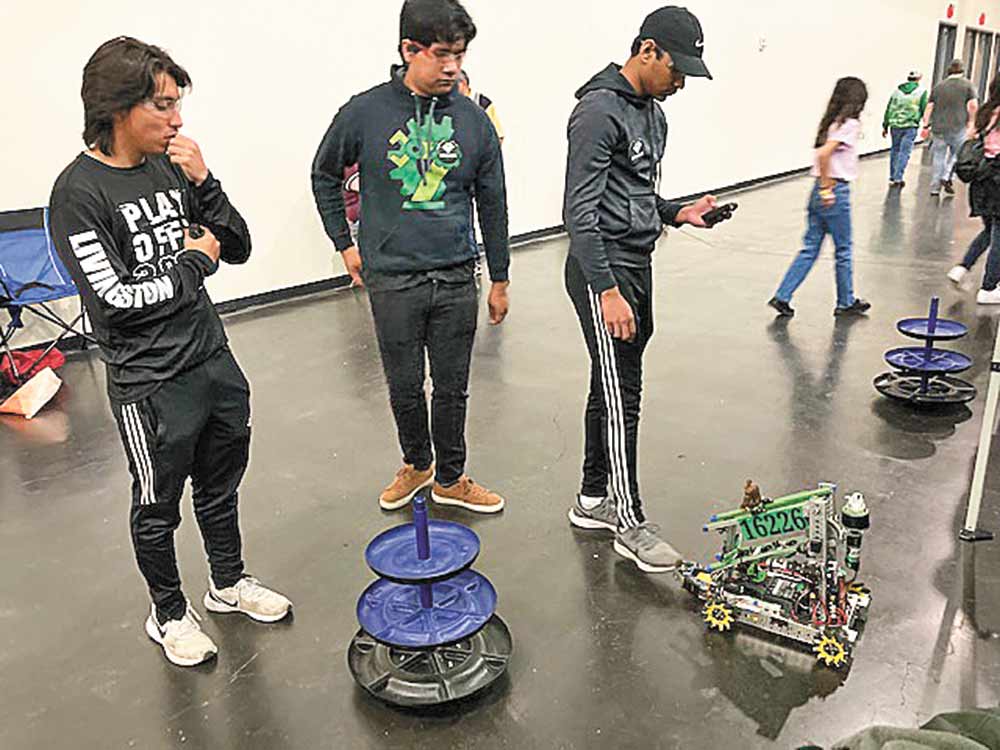 The Livingston High School robotics team won the UIL State Championship Robotics Competition last week while competing at the George R. Brown Convention Center in Houston.    The competition consisted of bracket-style play between 30 teams. The scores were totaled from the team and individual players and the bracket was narrowed to four teams. One point separated the first and second-place teams entering the final competition of the day.

This was the second UIL state championship in four years for the LHS robotics team, along with two regional back-to-back championships in 2021 and 2022. The team has been invited to compete in the Robotics Worlds Tournament April 20-23 in Houston. There will be 170 teams in attendance from all over the world. The Livingston High School students make up one of the top 10 Texas Robotics teams competing.

“We check for program bugs every day and we also practice driving the robot every day,” LHS Robotics Teacher Jeremiah Carr said, explaining how the team prepares for the competition.

Each of the 16 teammates offers a special skill including designers, builders, drivers, troubleshooters and programmers, with many teammates who have multiple skills. One teammate even creates custom parts using a 3D printer. The robot was built from a kit and the rules require it to fit in an 18x18-inch cube. Some of the robots use color sensors or cameras but the LHS team opted to use distance sensors. The competition only allows the team to bring one robot, but students are equipped with extra parts, batteries, brains, sensors and wires on game day.

“For the UIL competition, a game is released each year. This year’s game required two minutes of playtime. The first 30 seconds were autonomous play with required actions. The programmers use either Java Script or block coding,” Carr said. When asked if they have to start from the ground level each year, he said they may be able to reuse a specific part but usually they need to start from scratch each year.

Robotics is offered through the Career and Technical Education Department at Livingston High School. The prerequisite is Principals of Information Technology where students learn basic programming, hardware and software troubleshooting. Thirty students are admitted into robotics each year.

Carr said the LHS program began six years ago with four students and this year he teaches 5 classes with a total of 60 students.

“We have 15 seniors and one junior who are going to the Worlds. The seniors spend time working with the underclassmen. Maddison Rogers is the only girl in the program this year and said she has been encouraging more girls to join the robotics program next year. She’s one of the top programmers and will help carry the team next year,” Carr said.