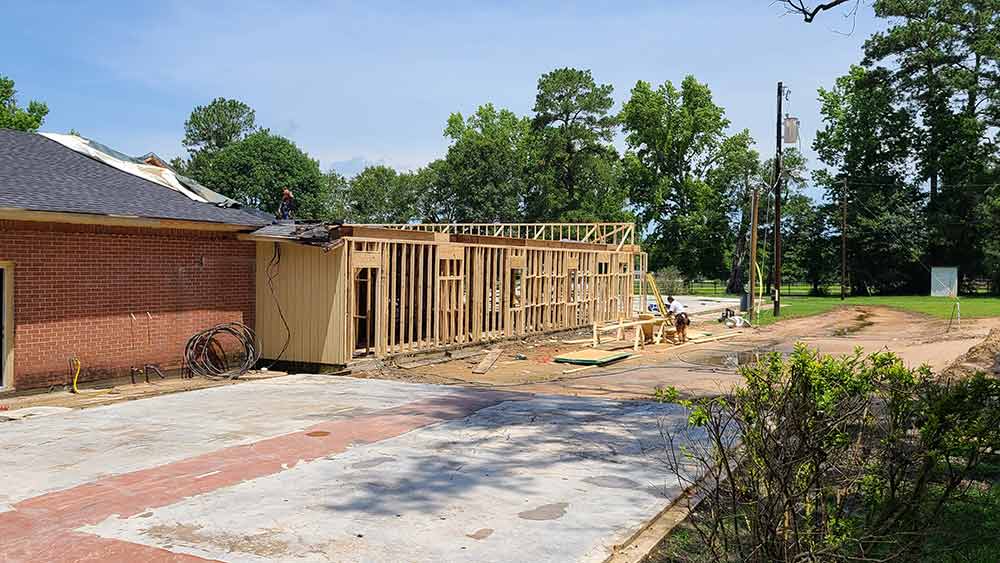 Chesswood Baptist Church has plans to be back in their building off Highway 59 by July 1. Photo By Brian Besch | PCE

There are big plans at Chesswood Baptist Church, as pastor Col. Howard Daniel says they will soon move back into their building just three months after it was decimated by fire.

July 1 is the targeted move-in date to 4357 U.S Highway 59, where there will be offices, restrooms, a nursery and exercise room. Last week, construction crews painting, putting in electricity and walls and spreading a new parking lot.

Also included is a room for worship that holds a capacity of 15 pews. That room is a temporary fix for Sunday mornings. On Dec. 25 and beyond, it will only be used for Wednesday and Sunday nights.

That is because there is a goal for the church to hold services in a newly completed sanctuary by Christmas Day.

Daniel admits that it is an ambitious goal, but work on the facility has been steady since the fire March 24.

"The cause of the fire was never determined," Daniel said while giving a tour of the ongoing work. "A lot of speculation on the street, but I can guarantee you, nobody knows."

Daniel said a secretary was in the building at the time and smelled something that she believed to be in her office. After disconnecting everything from the walls, she smelled smoke and eventually exited.

"We think it might have been some faulty wiring back there, but we don't know how or why it started,” Daniel said. “The speculation is out there big time and conspiracy theories. No one knows. But, we do know there was no foul play. That's the first thing people think of. The insurance company even hired an expert team to come in to find out the cause and they couldn't find anything."

The price tag for the rebuilding is thought to be just under $1 million. The amount lost in the blaze was about the same.

The conference room at the La Quinta Inn Livingston has been home to Chesswood for the past few months, where Daniel says a friend has helped the church.

The church turned to someone with experience for the construction, as the same contractor that built the sanctuary originally is back on the job.

"We are going to be bigger and better," Daniel said. "We have a state-of-the-art sound system going in and we will be able to video tape, so that we can have the fancy programming. We found the blueprints to the church that did not get burned. The only thing that is going to be different about Chesswood is that there is no two story. Basically, everything else is going to be the same."

Chesswood started in 1976 at a hamburger stand close to where Texas Bragg Barbecue once stood. Then, they moved in 1984 to the current address. The building used at that time was lost three months ago in the fire. From there, it moved just a few steps to the sanctuary that was also lost.

However, the church is already beginning to take shape once again. Daniel believes the goal of Christmas will be reached. There may even be a few flags out.

"I think it is the most beautiful church in Polk County and we want to keep it going."