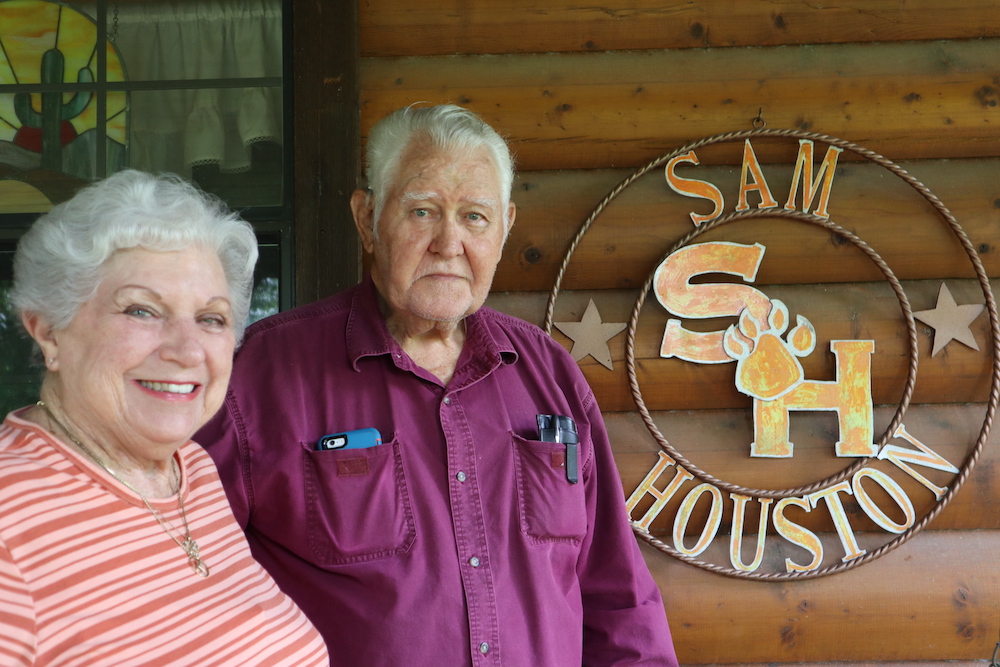 EMILY BANKS WOOTEN | PCE Nancy and Joe Hollis, proud alumni of Sam Houston State University, show off an SH metal sign, a gift from a granddaughter, that hangs on one of the covered porches of their log home.

“After that, we played in the Christmas Bowl in Natchitoches, La. in 1958 but we lost,” he said.

“Joe’s 1956 team and this year’s team were the only football teams at Sam Houston that were undefeated,” Nancy said. “Other teams won championships but those two were the only undefeated teams.”

“The ’56 group was a very unique group,” Joe said. “We were a close group of guys and after graduation we kept in touch and also kept in touch with the coaches even though there were some we didn’t think we liked at the time they were coaching us, but they were our friends after we graduated. It was a very enjoyable experience.”

“It was more like a family, not a football team,” Nancy said.

“Back then, you played both ways. You played offense and defense,” Joe said. “If you started a quarter you could come out one time and go back in, but if you came out after the quarter began, you could not go back in during that quarter. 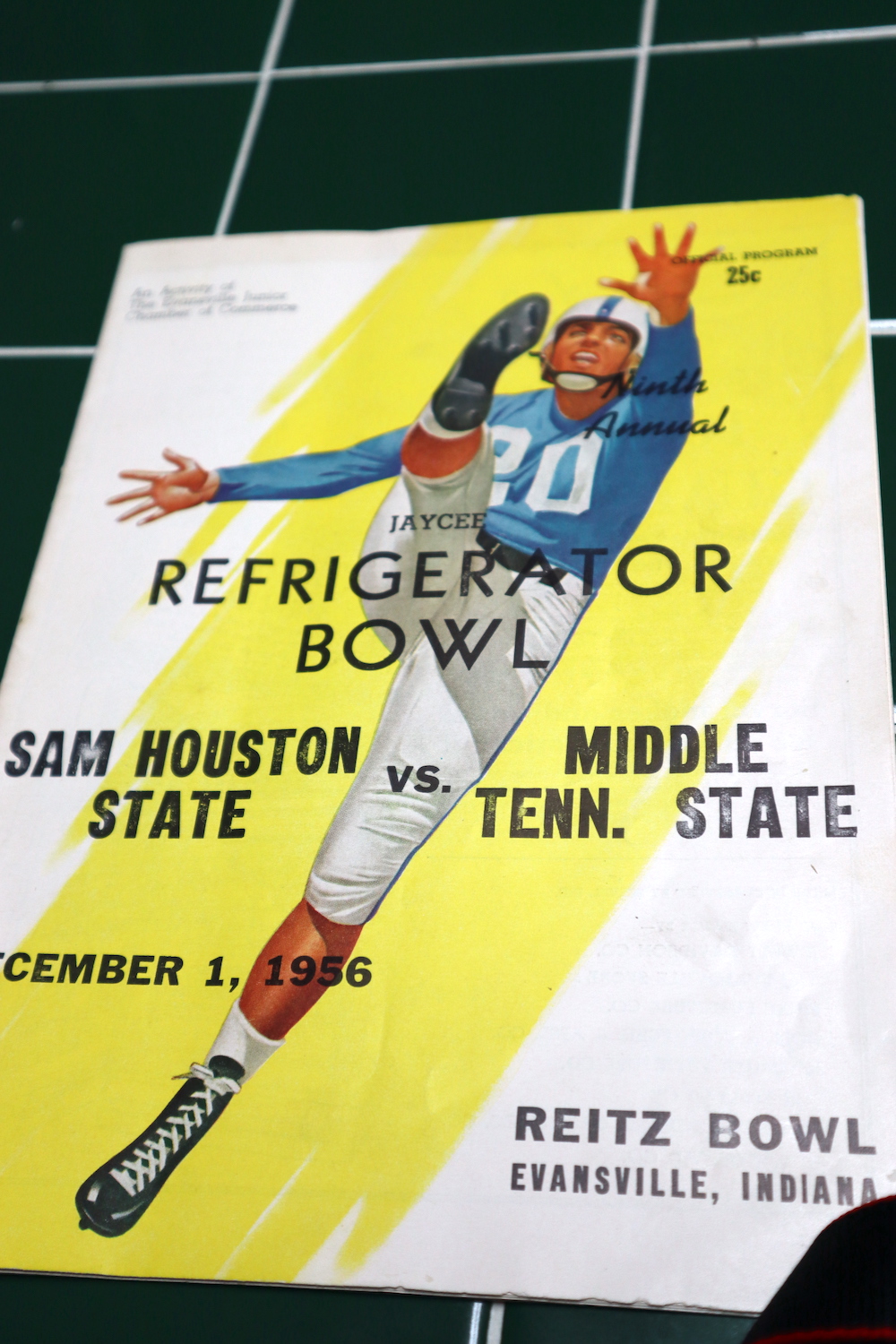 EMILY BANKS WOOTEN | PCE This treasured keepsake belonging to Joe and Nancy Hollis is the football program from the Dec. 1, 1956 Jaycee Refrigerator Bowl in which Sam Houston State University played Middle Tennessee State University in the Reitz Bowl in Evansville, Ind. Joe, a sophomore at the time, played guard for SHSU in this game in which the Bearkats won 27-13.

“The first year we were married we lived in the gym in a one-room efficiency apartment with a tiny little refrigerator and a couch that made out into a bed. They furnished light bulbs and toilet paper and gave you $28 a month,” Nancy said, as they both laughed at the thought.

She began teaching at Aldine and left Huntsville every morning at 5 a.m. with her five-person carpool crew. Nancy said the reason she took the Aldine job was because it paid $3,604 a year and Huntsville and other schools around there only paid $3,204 a year.

“I graduated in three years but it took him five,” Nancy said, in some good-natured ribbing. “But I learned so much more,” Joe said, giving it right back.

A 1954 graduate of Groveton High School, Joe played football at SHSU for five years, having red-shirted his first year.

“He already had half a master’s degree when he graduated with his bachelor’s in ‘59,” Nancy said. Having played fullback in high school, Joe said in the middle of his first year at Sam they decided he needed to be a guard, hence the fifth-year eligibility.

The Hollises moved to Livingston in 1996. Their three sons – Keith, Mark and Glenn – all graduated from SHSU. They also have seven grandchildren and 10 great grandchildren.

Joe spoke fondly about one of his teammates who was also his roommate. Known to all of his buddies as “D’Boy,” his actual name is Franklin Williams. “He’s been the one that’s kept everybody together. He calls each of us almost every week. He keeps up with who passes and when somebody passes he sends an arrangement and on the card always puts, ‘From the team.’ He’s just been really a Godsend to the group.” 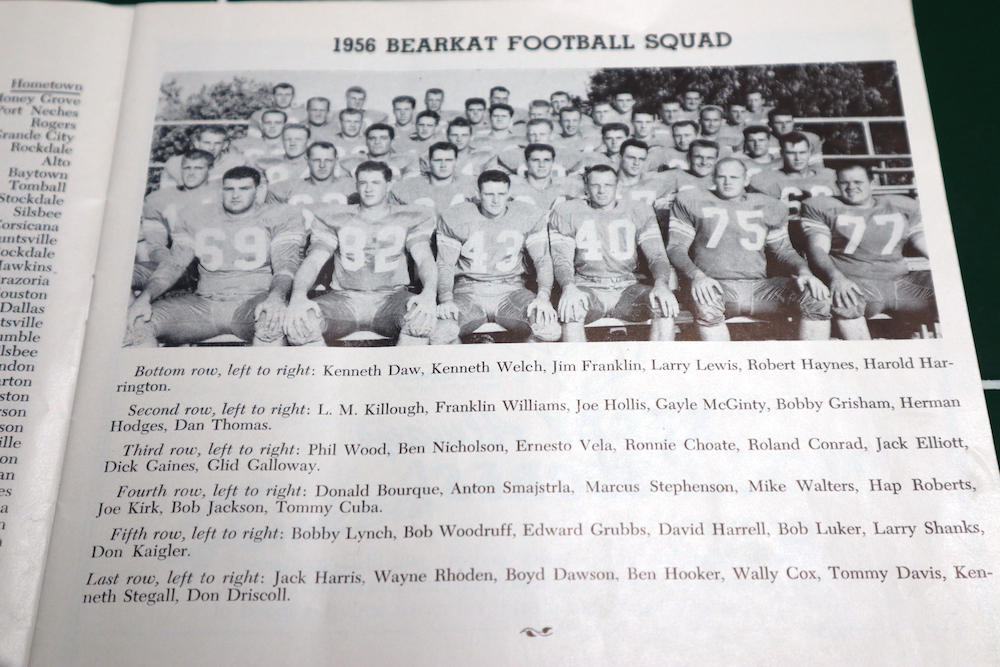 EMILY BANKS WOOTEN | PCE This is the 1956 SHSU Bearkat Football Squad. Joe Hollis, No. 64, is the third person from the left on the second row from the bottom.

Joe said the group used to meet yearly at Crystal Beach where one of the guys had a house. “Some would come in on Thursday and some on Friday. We’d have a big fish fry and shrimp on Saturday. We’d tell all the old lies.”

Unfortunately, the beach house was lost in one of the hurricanes and never rebuilt. Failing health has kept the group from meeting in recent years and sadly, the group is dwindling. “Three or four have passed this year,” Joe said.