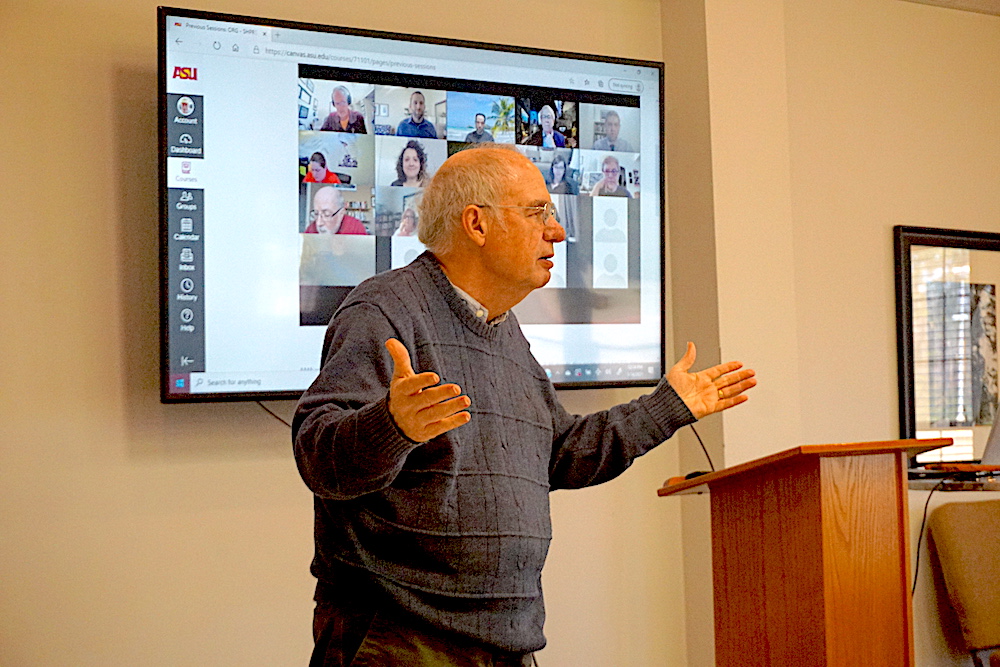 JASON CHLAPEK I PCE Joe Roth presents a Zoom discussion from his online WWII Studies class during a recent Rotary Club meeting. Roth is in graduate school at Arizona State, and takes his courses online.

College has changed quite a bit since Joe Roth graduated from Baylor in 1973.

The Livingston attorney returned to school last fall as a graduate student at Arizona State, albeit to a different setup — a virtual one. Roth filled his fellow Rotarians in on one of his fall semester courses by showing them 20 minutes of a Zoom discussion during a recent Rotary Club of Livingston meeting.

“So far so good,” Roth said. “Arizona State is very well known for its technology and innovation. They have some really good professors and the lectures are good. We write papers that are discussion boards and the professor will prose a prompt. We are required to not only respond to his prompt, but at least two other students’ prompts. It’s been a great experience.”

“I call this class, ‘D-Day and A-Bomb,’” Roth quipped. “One decision we will study will be the Allied decision to invade the continent of Europe in 1944 and all of the factors that went into that decision. We’re just getting started on that. The other decision will be the decision to drop nuclear weapons on Japan.”

Roth said he received a solid “B” in his first course, which was a survey course of WWII. In his second course — Decision Points I — he received an A.

“It was difficult after all these years getting back in a classroom setting again and taking tests with a timer over your head,” Roth said of his first course. “In Decision Points I, the decision that we studied were the decision of the Germans to invade the Soviet Union and what was Hitler thinking. The goal was to try and get into Hitler’s mind instead of writing a paper saying, ‘He’s a mad man. He’s crazy.’ We had to get in his mind and figure out what he was thinking in terms of logic and necessity. The second part of of Decision Point I was the Japanese decision to bomb Pearl Harbor. Once again, it was what were they (the Japanese) thinking. We could not write a paper saying, ‘They’re crazy.’ We had to get inside their minds and see what elements of logic and necessity existed in the attack on Pearl Harbor.”