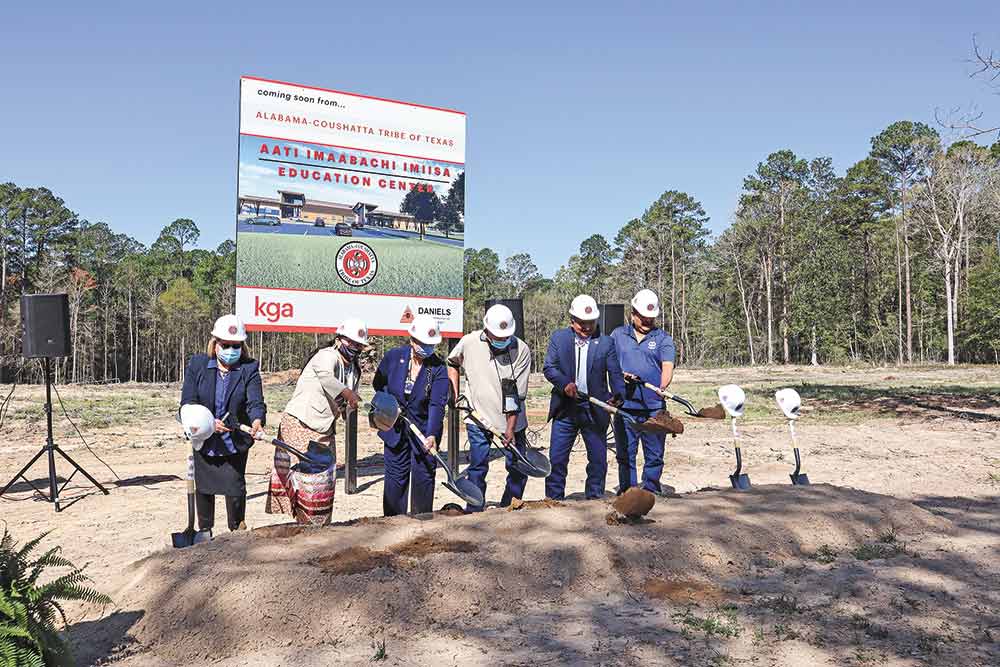 Alabama-Coushatta Tribe of Texas Chief Donnis Battise, along with members of the Tribal Council, break ground Friday at the site of what will be the tribe’s new 49,000-square-foot education center. Photo by Emily Banks Wooten

History was made Friday when representatives of the Alabama-Coushatta Tribe of Texas broke ground at the site where its new education center will be located. The Alabama-Coushatta Education Center will be a 49,000-square-foot building that will house the tribe’s education department, Head Start Program, tribal library and youth programs. The building will include classrooms, offices, common areas, kitchens for several of the programs, a courtyard, two play yards and a multi-purpose gym. The site will have a general parking lot as well as a secure area for bus parking. It will be located behind the Chief Kina Clinic.

“Good morning tribal citizens and guests. Today is a beautiful day. Today we break ground for an education center that will house several educational programs and youth activities. This has been a dream for our tribal council, way before I was on it,” Tribal Council Chairman Rickey Sylestine said.

“We’re hoping to start a language immersion program, a tribal Head Start, maybe even extending to grade school. Our chiefs have always stressed education. We fight our battles now through words, whether it’s in the courts or the halls of Congress. We’re not only serving as a tribe but thinking as a tribe.”

“This is a wonderful day, a long time coming. We’re very pleased to have a team of folks who will be our partners in bringing this to fruition,” Downing said as she introduced James C. Lord II, the architect from KGA Architecture out of Austin and Las Vegas, Janet Daniels, the contractor from and Daniels Building & Construction Inc. out of Beaumont and Kenneth and Brenda Jones from Cox Jones Architecture & Construction out of Nacogdoches.

“Five hundred forty-eight days. We anticipate being done with the construction process by the end of September 2024 and will rejoin here for a ribbon cutting,” Downing said.

“There have been many significant turning points in the tribe’s history which led us to where we are today. First and foremost, the traditional teachings of language, culture and traditions were part of everyday life within the respective villages and homes of the Alabama and Coushatta tribes. It was around 1880 when Christianity and education came to the tribe,” Battise said.

“In 1881, the Southern Presbyterian Church sent missionaries. The first were Rev. L.W. and Mrs. Currie of North Carolina. After five years, Rev. Currie’s health failed and his widow left the village. She would later return and taught school until 1899. It was during this time that Dr. C.W. and Mrs. Chambers arrived at the reservation. For over 37 years they served the tribal community as ministers, doctors, nurses, teachers and friends,” Battise said.

“Later, with federal assistance, a school with first through eighth grade was established. It included gardens to plant vegetables and fruit trees with a canning plant to process the bounty for the school cafeteria. There was a furniture building shop for the young men, while in the school gymnasium, the young women would manufacture mattresses. However, the school later closed. The reservation is located near Dallardsville in the Big Sandy Independent School District, where a majority of our students now attend. Tribal youth also attend both Woodville and Livingston schools,” Battise said.

“In 1957 a kindergarten was established and was housed in a renovated old locker plant near headquarters, the area where the current administration buildings are located. Mrs. Ethelyn Sylestine, wife of the late Mikko Oscola Chief Clayton Sylestine, was one of its teachers and on a personal note, my Chikpo (grandmother) Dorcas Bullock, was the cook for 36 years until her retirement in 1985,” Battise said.

“In 1960 the first Indian Reservation Library was established. As a young child, I can remember getting lost among those towering shelves of leatherbound books. Now off in a corner of the library was a dictionary which was placed on an ornate stand. It was massive and my curiosity got the better of me. I went over and tried to turn a few pages, but I wasn’t tall enough to reach so I leaned into it. It came crashing down with me pinned underneath. I never went back to that corner of the library ever again,” Battise said.

“The library would later be moved to what was the former pottery plant with its first librarian, Mrs. Delores Poncho, and after 32 years of service, Mrs. Poncho retired on February 4, 2022. In 1965 the Head Start Program was founded. Tribal Council Member Roland Poncho was its first director. Today it is under the leadership of Miss Essie Love, along with the Head Start Policy Council, teachers and staff. Our first education director was the late Marilyn Battise and then Mrs. Janie Rhinesmith. Ms. Allison Poncho serves in this capacity today,” Battise said.

“Mrs. Carlene Sue Bullock was instrumental in the development of the Alabama-Coushatta Youth Program. Last year, she received the J.R. Cook United National Indian Tribal Youth Advisor of the Year Award. Today, Mrs. Kimberly Bullock directs this program and the Inner Voice Youth Council and she will receive her masters degree from the University of Oklahoma Graduate College next month,” Battise said.

“Mikko Kinaq Robert Fulton Battise, who served his people for 58 years, was a firm and committed supporter of higher education. His words of encouragement to our tribal youth were most welcomed. Mikko Colabe Atokla Emmett Battise and Mikko Colabe III Clem Fain Sylestine were educators in the Texas school system. Mikko Skaalaba Herbert Johnson Sr. served on the Big Sandy School Board for 48 years,” Battise said.

Referring to the quote from the late Christa McAuliffe, American teacher and astronaut, “I touch the future … I teach,” Battise asked all the educators, teachers and teachers assistants to stand and be recognized.

“So here we are assembled today, from a one-room mission school building to a future education center which will include numerous classrooms, offices, kitchens and a multi-purpose gym. We are hopeful and excited to see what the future holds in this new era of education,” Battise concluded.

An opening invocation was led by Debra Kleinman and following remarks, Millie Williams blessed the site prior to the chief and tribal council donning hard hats and grabbing shovels to break the ground.