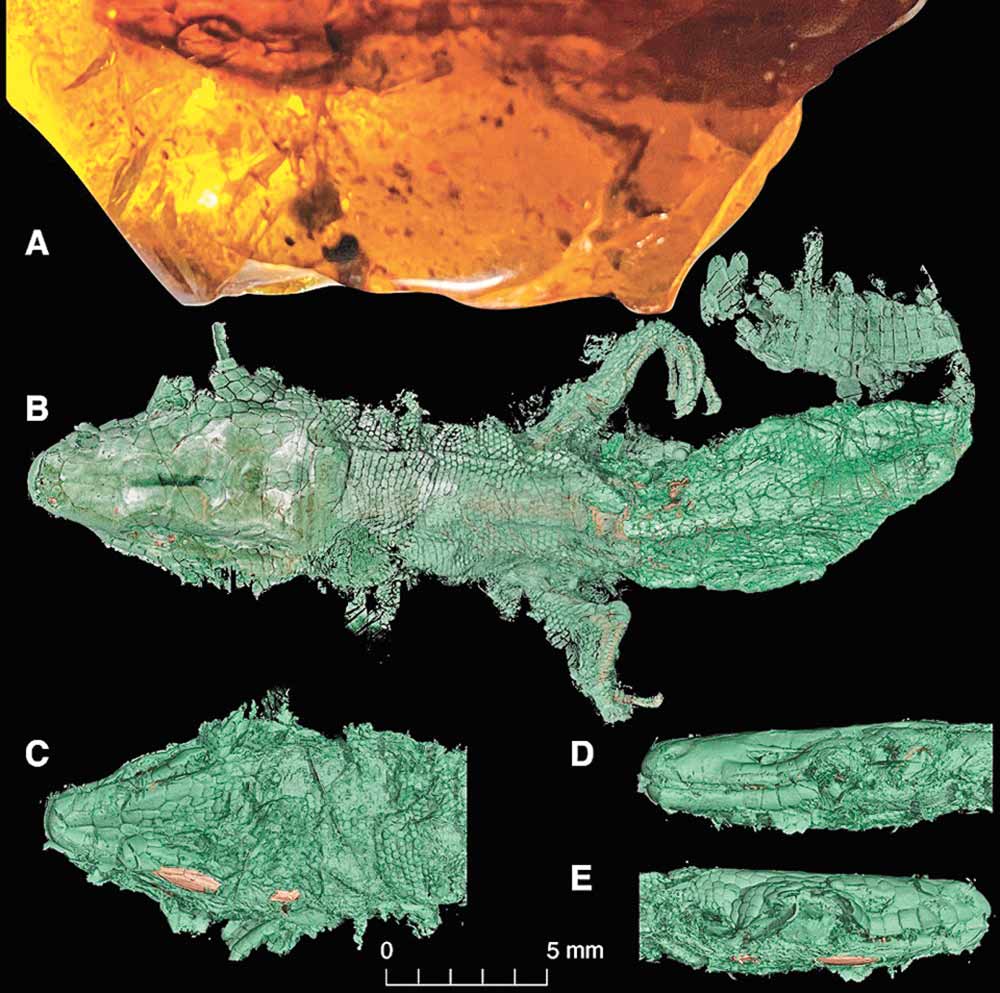 Retinosaurus hkamtiensis, A) Fossil embed in amber, B)3D model of the body dorsal scales, C) Detail of the ventral scales of the head, D and E) Lateral views of the head. CT reconstructions by Edward Stanley using synchrotron data gathered at Imaging and Medical Beamline at the Australi-an Synchrotron in Melbourne. Images courtesy of Adolf Peretti and the Peretti Museum Foundation

Juan Diego Daza, associate professor in Sam Houston State University’s Department of Biological Sciences, is co-author of a new study that involves the discovery a new species of fossil lizard.

Published recently in Scientific Reports, the collaborative research describes the first definite representative of a group of lizards known as scincoideans, a group that today includes skinks, Ar-mored Lizards, and Night Lizards, or xantusiids. Intriguingly, the fossil most closely resembles xantusiids, which are today found only the American southwest, Central America and Cuba, half a world away from Myanmar.

According to Daza, this new fossil lizard resembles xantusiids in some morphological features, notably the arrangement of its scales which, along with parts of the skeleton, have been preserved in the amber. Even the delicate eyelids are visible, revealing a difference from modern Night Liz-ards, in which the eyelids are fused into a transparent scale, as in snakes.

“We had the rare opportunity of studying the articulated skeleton, but also describing the external appearance of the lizard (scalation), in the same way that herpetologists (amphibian and reptile specialists) study modern species,” Daza said.

The resemblance of this fairly complete specimen to modern xantusiids suggests that the new fossil lizard, like modern xantusiids, may have been active in cryptic microhabitats such as rock crevices or under logs.

The specimen was found in Myanmar’s Hkamti District in a mine located about 100 kilometers from the more famous mines of the Hukawng Basin which have yielded most of the previously described fossil vertebrates from Myanmar. The new mine is also older by 10 million years, placing these fossils in the Early Cretaceous.

The fossil was found in 2017 by local researcher, Burmese gemologist Nyi Nyi Aung who was working with Adolf Peretti from GRS Gemresearch, the curator of the Peretti Museum Foundation (a Swiss institution dedicated to Burmite research), where the specimen now resides. Together they recognized the scientific significance of the specimen, which was recovered from among the hun-dreds of thousands of amber pieces from the Khamti region recovered by indigenous miners. The specimen has travelled around the world to access the latest imaging technology, including the High-Resolution X-Ray CT Facility in Austin, Texas and the Australian Nuclear Science and Technology Organisation.

With the data generated in these facilities, the fossil could be studied in great detail by an international collaboration of researchers from Myanmar, the United Kingdom, Spain, Slovakia, Canada, USA, Argentina, and Australia. 3D data from the CT analysis is freely available to other researchers, educators and the general public.

The study was the result of an international team of collaborators lead by Andrej Čerňanský from the Comenius University in Bratislava.