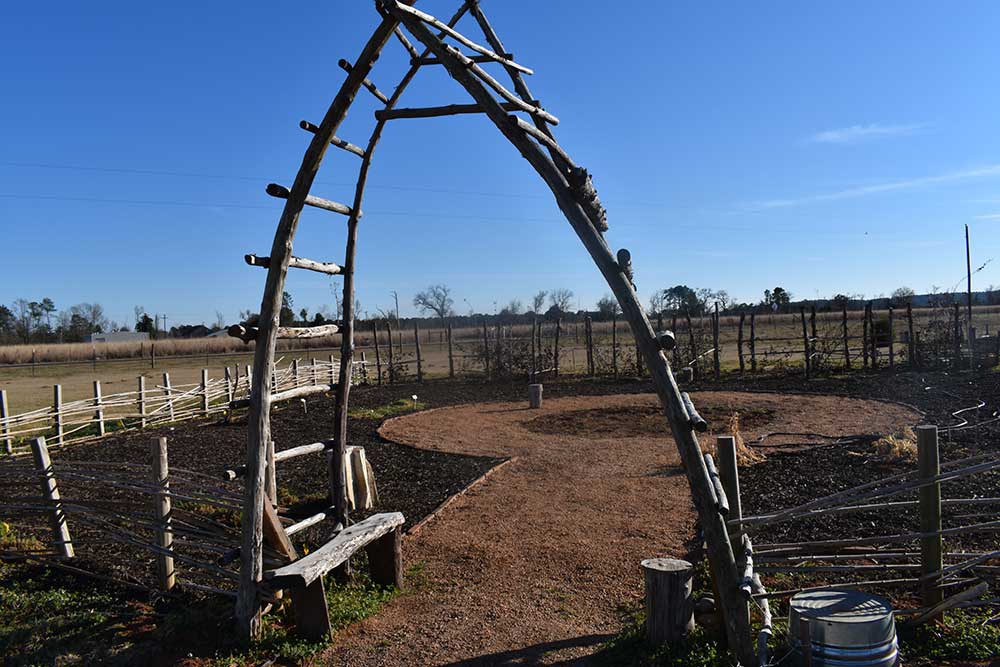 Off State Highway 21 West, not far from Alto, three earthen mounds rise from the lush prairie landscape - remnants of what was once an influential ceremonial center for the Mound Builder culture. Locally known as Caddo Mounds, the site is one of the most extensively investigated Indian sites in Texas and reveals much about the everyday lives of the tribe, known as the Hasinai. The Mounds, located on what was once the El Camino Real, give great insight into the culture of the Caddo Indians who occupied the area. The 397-acre site consists of a temple mound, a low platform mound, a burial mound, and a large portion of the adjacent village.

When the village was abandoned, the burial mound was estimated to be twenty feet tall and over ninety feet in diameter. The mound consisted of layers upon layers of graves spanning generations. The process began when an influential political or spiritual leader was buried. Archeologists who excavated the mounds would sometimes find several bodies occupying one grave, indicating that servants or even family members may have been sacrificed and buried along with the leader to honor their death. Special items were also buried with the deceased, such as jewelry, finely decorated pottery, and intricate stone tools that symbolized the person’s importance and to help them along in the afterlife.

Occasionally wooden frames with thatched roofs were built over the graves as a ‘protection’ for its inhabitants. After days of ceremonies, rituals, and feasts honoring the dead, workers would bring in layers and layers of fresh dirt to cover the tomb and make a new surface on the mound. This required thousands of baskets of soil, carried by workers one at a time, mounding up the dirt. It was a slow, back-breaking process. Then the cycle of building, living, dying, and rebuilding would begin all over again.

The tallest ritual or temple mound was originally more than 35 feet in height.

It was the political and spiritual center of the village. The temple mounds contained layers of the charred remains of wooden buildings that were once temples or houses of important leaders. The buildings were periodically taken apart and burned for safety or as special rituals. Then a new temple was built on the same spot, above the charred remains of the old one.

Much like the burial mounds, the ritual mounds developed over long periods of time. Archeologists have suggested that the second temple mound, known as the ‘low platform mound,’ may have served a ritual or ceremonial function.

In 1982, the Texas Parks and Wildlife Department opened the site to the public. A Visitors Center containing exhibits and replicas of artifacts helped visitors learn about the history and culture of the Caddoans. Self-guided walking trails guided tourists around the mounds and the village.

During celebrations of Caddo Culture Day in April 2019, an EF3 tornado struck the Mounds, killing one person and injuring dozens more. The visitor center and service buildings were heavily damaged, with a capital loss estimated at $2.5 million. Many artifact replicas were lost, along with the thatched-roof home representative of the Caddo people’s dwellings.

On Saturday, January 22, the Friends of Caddo Mounds sponsored a day full of events designed to bring awareness to the historical Caddo Mounds, but more importantly, to rebuild the Caddo grass house. Saturday’s events began with a switch-grass cutting at the East Texas Plant Materials Center, near Nacogdoches. About forty Caddo Mounds and East Texas Plant Materials staff and volunteers cut a quarter of an acre of switchgrass for thatching the house. At 4 p.m., the public was invited to the Caddo Mounds site, where Friends of Caddo Mounds President Jeff Williams shared information about rebuilding the grass house. The target date for beginning construction of the house is July 4, with the main work to start on July 9. Williams expects the house will be completed by September or October. Following William’s remarks, Dr. Leslie Bush spoke on the archeology of Caddo building materials and how the homes were made. Attendees were then invited to stay for star-gazing with Doug Parsons, Professor of Physics and Astronomy at Tyler Junior College.