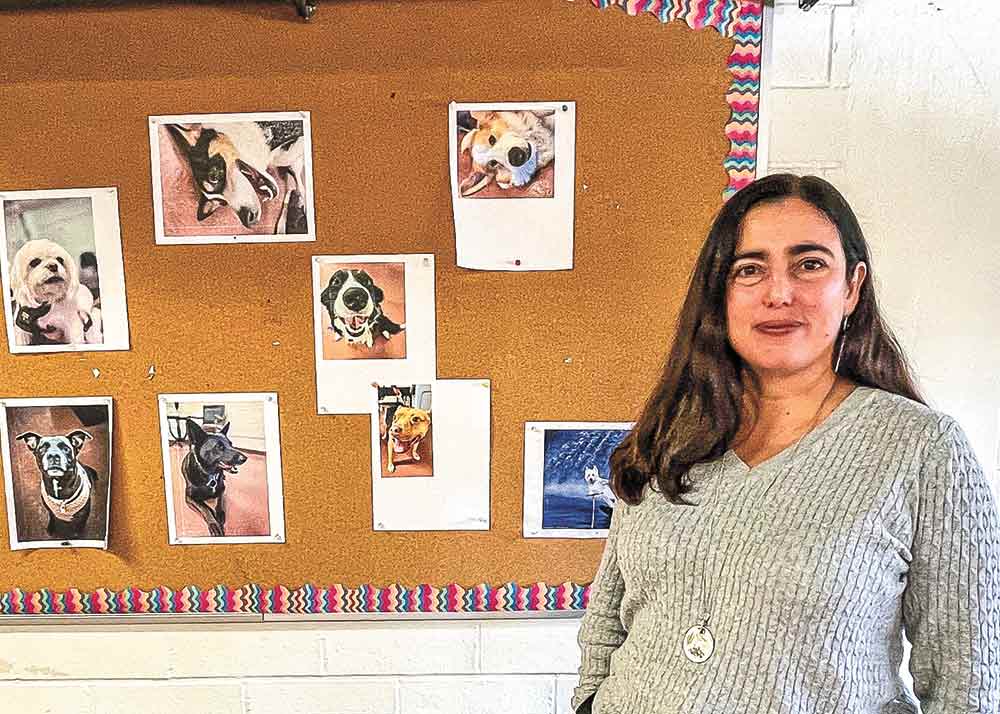 Maria Botero hopes to use the results of her research to better understand the relationship between personality in dogs and dog cognition.

The effects of stress and personality on domestic dogs’ cognition is a topic of great interest to Maria Botero, associate professor in Sam Houston State University’s Department of Psychology and Philosophy.

Working with John Gulley, a senior psychology major at the university, Botero conducted research on 50 dogs in Fall 2021. Analyzing the collected data in Spring 2022, Botero hopes to use the results to better understand the relationship between personality in dogs and dog cognition. The goal is to test whether a personality questionnaire can be used to better place dogs in families and jobs that are best suited for their personality type.

“My aim is on welfare. If we can determine the personality of the dog and know what outcomes are associated with that personality, shelters can place the dog with a family that is best suited to take care of them and enjoy them,” Botero said. “I think it is beneficial in recruiting dogs for different jobs. If we know that certain personality types focus more on solving the puzzle in our research, we know that those personality types would be better for rescuing and finding people. If a dog is more focused on their owner than retrieving dog treats from a dog puzzle, we can determine that personality type would be better suited to be a companion animal.”

This research began when Gulley wanted to pursue research on hybrids of wolves and dogs through a shelter he volunteered with. Botero offered the solution of working together to understand domestic dogs first to make the beginning of her student’s research career safer.

“I am ridiculously protective of my students, so I thought, ‘Why don’t we change gears a little here in the beginning?’,” Botero explained. “This could actually be a long-term project that develops from our start in dog cognition and personalities to then researching other traits in dogs or wolf and dog hybrids.”

Upon making the decision to research dog cognition, SHSU’s Office of Research and Sponsored Programs lined up funding and helped Botero find a space on campus suitable for the team to observe dogs.

“They gave me the funds to buy equipment for the thermal camera, the cameras to record each subject’s session, the dog treats, the cleaning supplies, all the things that added up quickly,” Botero said. “They also helped me in getting this space, which is my dream space for this project. It doesn’t have carpet, and I was able to divide it into an observation room, a room for the owner and even a corner for families who may join. I am currently working to see if I can keep the space for future research endeavors with dogs.”

Botero’s research was conducted by giving the participants a cognitive puzzle to solve, in which they found treats, and observing how they approached the task. Upon arriving to the lab, the dog owner was tasked with filling out a personality quiz to identify the typical nature of the dog outside the research setting. Then, the data collection with Botero began.

“First, I used a thermal camera to take the temperature of the dog, which shows how stressed or anxious the dog is prior to being given a cognitive task,” she said. “Then, I had the owner sit on one side of the room and showed the dog how to solve the puzzle. I sat on the opposite side and observed how they attempted to solve the puzzle for two minutes. After two minutes, I thanked the dog with a treat and recorded their temperature again.”

Of the 50 dogs that participated, personalities varied. All attempts were recorded with three cameras placed around the room for Botero and Gulley to analyze this semester.

“The first dog we had got all 12 treats from the puzzle, and his technique was hilarious and super effective,” Botero said. “Some had more delicate approaches, and some weren’t interested at all. Some of them looked to their owner for approval or help.”

Ethics are very important to Botero, and every effort was made to ensure that the dogs and owners were comfortable throughout the entire process. Owners were given a consent form before beginning, and dogs were given a way out if they ever did not want to participate.

“The consent form is part of the requirements of the Institutional Animal Care & Use Committee (IACUC), and they do a wonderful job at making sure all procedures are done in an ethical way,” Botero explained. “We used a gate that could easily be pushed open if the dog wanted out; and if there were any dogs that were uncomfortable with males, Gulley would step out while I conducted the research. There was one dog that showed signs of being nervous, so we decided not to test him. There was another who was anxious about the steps when leaving the space, and we took our time and allowed him to warm up to them. If the dog is not comfortable, I do not believe in forcing them to do anything.”

Upon completing data collection for this research, Botero hopes to continue researching different aspects of psychology in dogs and bringing undergraduate students in on the experience.

“I am very grateful for everything the university has done to make this research possible, as well as for all our participants,” Botero said. “While the first step is to run the data and see what my results are, my next step will be to start applying for grants to continue this research and support undergrads in the lab.”