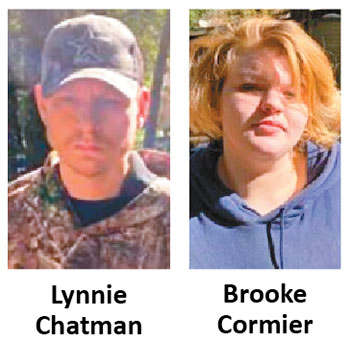 The Polk County Sheriff’s Office received confirmation Monday from the U.S. Marshal’s Task Force that Lynnie Chatman, 40, and Brooke Ashley Cormier, 22, were found in Liberty County and taken into custody without incident.

Chatman and Cormier were wanted in conjunction with the death of Leonard Eral Chatman, 64, who was found in the front yard of a home in the 14000 block of FM 350 North in Livingston at approximately 1 p.m. on Nov. 18. Sheriff’s deputies and detectives, along with assistance from the Texas Rangers, arrived at the scene and began an investigation.

The deceased’s son was already wanted on four unrelated felony warrants and was being sought by the Polk County Sheriff’s Office for questioning. As the investigation into the Livingston man’s death continued, sheriff’s deputies learned of an additional suspect, Cormier, the younger Chatman’s girlfriend, who was also wanted on two unrelated felony warrants, as well as for questioning regarding the investigation.

“The Polk County Sheriff’s Office would like to thank all that were involved in locating both subjects,” Captain David Sottosanti said.