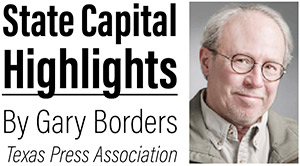 An Eastland County sheriff’s deputy died Thursday as wildfires swept through several small Texas communities west of Dallas, destroying at least 50 homes and charring more than 54,000 acres as of Sunday.

Deputy Sgt. Barbara Fenley died while going door to door warning people to flee, according to the Austin American-Statesman.

Sgt. Fenley ran off a smoke-covered road and was engulfed in the fire, the sheriff said.

Several wildfires merged to form what is now known as the Eastland Complex fire. The blaze started last Thursday afternoon and in less than three hours destroyed 86 houses in Carbon, a town of just 272 residents in Eastland County, about 120 miles west of Dallas.

Gov. Greg Abbott issued a disaster declaration for 11 counties in response to the wildfires.

“I commend the hard work and selfless acts of thousands of first responders and firefighters who are risking their own lives to protect our communities,” Abbott said.  “I also ask Texans to join me in praying for those who have been affected by these wildfires, including Eastland County Deputy Barbara Fenley, who was tragically killed while trying to save lives.”

The task force was formed at the behest of Abbott in response to a growing shortage of teachers across the state. Its goal is to “better understand the significant staffing challenges facing Texas public schools and to make comprehensive recommendations to address these issues,” according to TEA.

Josue Torres of Forney, an elementary school math teacher from Dallas ISD, will serve as chair of the task force.

“The reason I got into education is because I believe that a student’s zip code shouldn’t determine his or her fate,” Torres said. “This task force has the ability to recommend the needed changes and innovative solutions necessary to ensure all Texas students have access to the high-quality educators they deserve.”

Traffic fatalities in the state were up 15 percent last year, making 2021 the second-deadliest year on Texas roads with 4,480 people killed — the highest total since 1981, according to the Texas Department of Transportation.

Commissioner Laura Ryan pointed out that roadway safety is a shared responsibility between the public, engineers and law enforcement.

In 2021, 1,522 people died because of speed-related causes, and 1,219 were killed because they were not wearing seat belts, Ryan said.

“Driver behavior is one of the causes but also one of the most important solutions,” she said.

With increased focus on engineering, enforcement and on the critical role drivers play in road safety, Ryan and TxDOT leaders believe the state can end the streak of daily deaths on Texas roadways. #EndTheStreakTX is a broad social media and word-of-mouth effort that encourages drivers to make safer choices while behind the wheel, such as wearing a seat belt, driving the speed limit, never texting and driving, and never driving under the influence of alcohol or other drugs.

Thousands of Texas volunteer at the state’s public schools, and the State Board of Education would like to recognize some of them with a Heroes for Children Award. Any Texas resident who contributes time, service or support to public schools and student can be nominated. School employees or elected officials are not eligible.

One recipient will be chosen for each of the 15 SBOE districts in the state. Award recipients will be recognized at the board’s September meeting. The deadline for nominations is July 15. Additional information and access to the nomination form can be found at https://tea.texas.gov/Heroes_for_Children.aspx .

The number of new COVID-19 cases dropped once again to 18,744 in the past week, according to the Coronavirus Resource Center at Johns Hopkins University, with 418 deaths recorded. Two months ago, largely as a result of the omicron variant, 440,341 cases were reported along with 2,311 deaths.

The number of lab-confirmed COVID-19 hospitalizations also dropped to 1,605, according to the Texas Department of State Health Services, down 20 percent from the previous week.

DSHS reports 17.373 million Texans are fully vaccinated, which is 59.6 percent of the total population. In addition, 6.429 million of the state’s residents have received a booster dose.