Cutter Lowe ran a pass in for a touchdown last week against the Mt. Carmel Bulldogs. The Yellowjackets defeated the Bulldogs 63-8 in the game, which ended at the half due to the mercy rule. Photo by Becki Byrd

COLMESNEIL – A game with three whole quarters of play without a single score is an obvious sign that both teams’ defensive mechanisms are firing on all cylinders.

The Colmesneil Bulldogs took on the Cayuga Wildcats last Friday on Taylor Field, and although the ‘Dogs came up short by eight points in the end (16-8) marking the first Colmesneil loss of the young season, it was an impressive contest, defensively.

Ultimately, the Wildcats held the ‘Dogs to a total of 118 total yards; 85 passing yards and 33 rushing on 34 plays ran. A single score in the fourth quarter for the Wildcats, on an 83-yard run on a first and 10, lit up the scoreboard for the first time of the night.

Another score on a 30-yard run put Cayuga in the lead for good. Turnovers on offense gave the ‘Dogs a chance to seize the reins, but the Wildcats’ defense held them off on two occasions, without a first down.

Colmesneil goes into Homecoming this Friday against the Overton Mustangs with a 2-1 record. The game begins at 7 p.m.

The last time the ‘Dogs and Mustangs met up, Colmesneil shut them out, 32-0.

The ‘Dogs have one more home game after that against Cushing, next week, before starting district with a road game against the Lovelady Lions.

For Homecoming week activities, there will be a community pep rally at 6:30 p.m. on Thursday on Taylor Field, followed by a bonfire near the baseball field and track. Prior to Friday’s game, at 6:30 p.m., the Homecoming Court will be presented on the field, with the crowning of this year’s queen.

According to Athletic Director Cody Day, the run was on a “very hot and difficult” trail in Broaddus.
The cross-country teams competed Wednesday at West Sabine in Pineland. Results from that meet are unavailable at press time.

The top finishers from Colmesneil were: 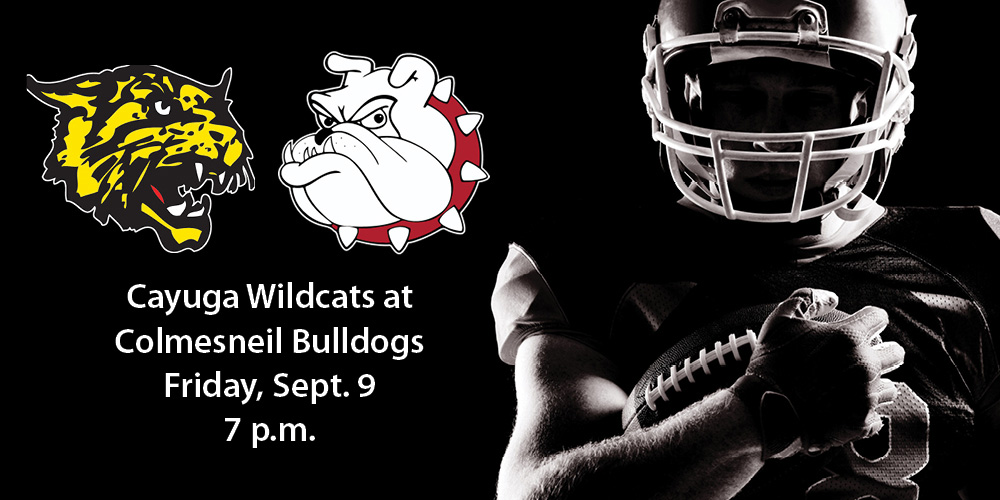 COLMESNEIL – It was Thursday night, and the weather was right. There was no reason to relocate the schedule game, like the week prior, and with those factors in play, the Colmesneil Bulldogs were ready to give a hometown crowd a show on Taylor Field.

The ‘Dogs hosted the Houston-area school KIPP East End and hammered them in a 50-6 win for Coach Cody Day’s crew.


An offensive onslaught from Colmesneil put up an insurmountable 42-6 lead by the half, and going into the second half of the game, the ‘Dogs cruised to their victory.


Day said he is proud of the ‘Dogs’ growth through the team’s first two games.


Offensively, the ‘Dogs were led on Thursday by Jeremi Shamblin and Reed Best, who picked up 103 and 94 yards, respectively, rushing.


The 2-0 Bulldogs will take on the Cayuga Wildcats this Friday at home, with a 7 p.m. kickoff.

“Cayuga presents a big challenge, particularly up front, where their offensive line averages about 260 lbs. per kid,” Day said.

Cayuga is one of the new schools in the most recently minted UIL alignment for District 2A Region III.


Kickoff for Friday’s game is at 7 p.m. Cayuga is coming off of a loss to Mildred and sitting 1-1 in week three of high school football. 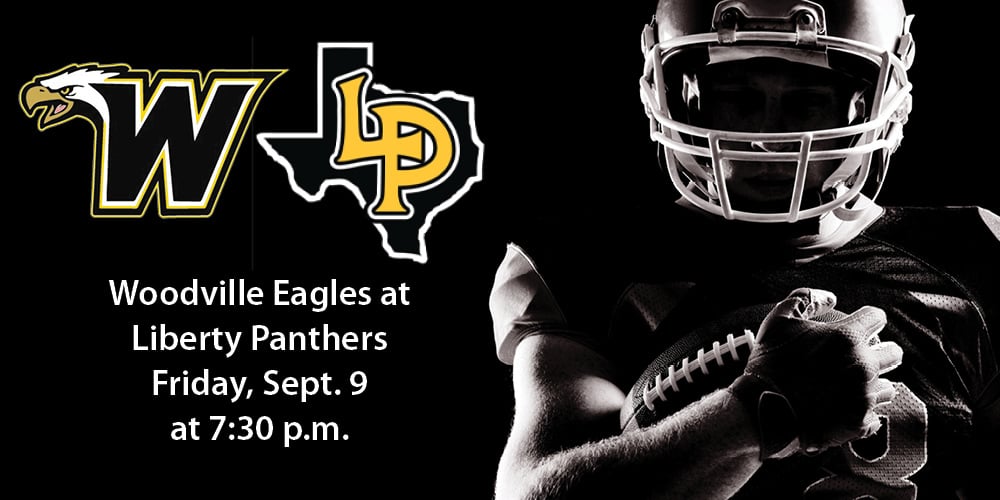 WOODVILLE – Friday night was likely a shock to many area high school football faithful followers, and proved that Coach Ty Robinson and his mighty band of Eagles are a force to be reckoned with.


It was Eagles vs. Eagles at Woodville’s Eagle Stadium, and in the visiting team corner, those Eagles happened to be the fierce ones of the Newton County variety, as in five-time state champion Newton Eagles.


What seems to be a great strategy by Coach Rob is playing heavy-duty opponents in the weeks leading up to district.


Last year, Woodville and Newton met in the season opener, and the results were not close to the Woodville team’s favor. This year was a different story, thanks to a successful two-point conversion on a play.

What both sides of the stadium witnessed was a great game, with solid plays on both sides of the ball for both teams and scoring close throughout. However, at the end of the night, it was a 23-22 razor-thin margin of victory in Woodville’s favor.


Woodville’s first score of the night came well into the first quarter with a 98-yard run from senior running back Jatavian Taylor on a Woodville first and two.


At the halftime mark, Woodville held a single-point lead, 15-14, which disappeared late in the third quarter courtesy of a Newton TD.


In the fourth quarter, Woodville was behind 22-15 with five minutes left on the clock. A blocked punt at Newton’s 11-yard line put things into motion for Woodville’s offense. A touchdown pass and a successful two-point attempt sealed the deal with the single-point victory for Woodville. Defensively, Woodville held off Newton in an attempt at another TD.


After all was said and done, one accolade Woodville achieved was to crack the 409Sports’ Football Top 5 rankings, which placed the Eagles up alongside football powerhouses like West Orange-Stark and Little Cypress-Mauriceville.


This Friday, the Eagles take on the winless Liberty Panthers on the road. Kickoff is at 7:30 p.m. 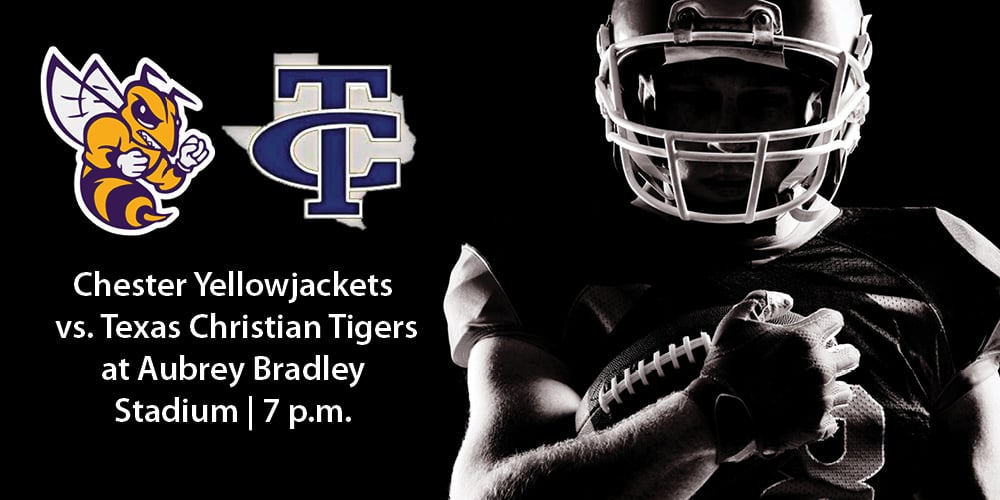 Coach Justin Hilliard said “This was a game of firsts for our team. It was the first time since 2015 that the football team won the first game of the season. Also, five athletes scored their first varsity touchdowns.” Hilliard said this was a total team win, and the entire team saw playing time.

The boys had to endure an almost three-hour bus ride. “We had no information on O’Connell prior to the game,” said Hilliard. This unknown makes it difficult to prepare a game plan. The Bucanneers had size and athletic ability, but team play from the Jackets’ defense and rallying to the ball limited any running lanes for the Bucs.

Offensively, the Jackets executed the game plan well. There were a few things that needed correction, but overall, the Yellowjackets played an exceptional game on both sides of the ball.

Keighen Green scored on the first play of the game with a 35-yard run.  Green had two carries on the night for 60 yards and two touchdowns.  Kessler Romo rushed for 88 yards and had a touchdown on a punt return.  Chase Bertrand threw a 9-yard touchdown pass to Zack Redwine just before the clock ran out at halftime.  Travis Zulpo started off the second half with a 53-yard touchdown run.  Jaxson Gay also ran for 28 yards and scored a touchdown.  Kai Hilliard intercepted a pass and returned it 48 yards for a touchdown. This touchdown run made the score 47-0 and ended the game in the third quarter due to the mercy rule.Defensively, Chester gave up less than 50 yards on defense and only allowed three first downs.  Levi Barnhart and Jesse Bittick had multiple tackles for loss.  Blake Zulpo penetrated the offensive line nearly every play and forced a fumble.

The Jackets will play at home Friday, Sept. 2 at 7 p.m. They will host the Texas Christian Tigers, who won a state title in 2020 and went three rounds deep in the playoffs last season. Hilliard said, “The Tigers will be fast and physical. The challenge will be to contain their running back, but our Jackets will be ready for the challenge”. Come to Aubry Bradley Stadium on Friday night to see the Jackets take on this challenge.

Junior High Football
The junior high football team will get their season started on the road next week. The team will travel to Katy to battle the Faith West Eagles at 5:00 p.m. on Thursday, Sept. 8.

Lady Jacket Varsity Volleyball
The Lady Jackets had another busy week of volleyball, playing eight games in just seven days. The Lady Jackets opened the week on Tuesday, August 23 with a three-game sweep over the Apple Spring Lady Eagles. The team traveled to Warren to compete in the Warren Varsity Tournament on Thursday. The team won all three pool games against Newton, Warren JV, and San Augustine, sending them to the Gold Bracket for Saturday games. The Lady Jackets hosted Lead Academy on Friday night, defeating them 3-0.

On Saturday, the Lady Jackets started the day with a 2-1 win over the Huntington Lady Red Devils. The team took on Tarkington in game two, and both games by close scores. The final game of the day for the Lady Jackets was against Warren. The girls played hard but were not able to pull out the win and dropped the match 1-2.

Lily Read led the Lady Jackets this week in kills. Read just returned to action last Thursday from an injury.
Abby Grimes and Kyli Handley both led in digs. Kinsley Barnes led the team in serving, with some timely aces and overall great serves. Emma Grimes continues to lead in assists.

Coach Patrick Sluga is constantly praising the Lady Jackets. Sluga said he loves the fact that this group of girls respect all of their opponents, but fear none of them. They take on bigger schools and never back down. Sluga said, “the old adage of ‘It’s not the size of the dog in the fight, but the size of the fight in the dog’ fits perfectly with this team.” If you have not had a chance to watch these girls in action, you need to make a point to go see them. They are going to accomplish great things this season and in the seasons to come.

The Lady Jackets will host Evadale on Friday, Sept. 2 at 4:30 p.m. On Tuesday, Sept. 6, the varsity will travel to Centerville to take on the Lady Tigers at around 6 p.m. (after the conclusion of the JV game, which starts at 5 p.m).

Lady Jacket JV Volleyball
The Chester JV volleyball team defeated Lead Academy last Friday, August 26 2-0. Faith Jerkins led in assists and serves. Lexi McDonnold led in digs, Mercedes Luther led in blocks, and Koree Hilliard led in kills.
The JV team will play against the Evadale Lady Rebels on Friday, September 2 around 5:30 p.m. The JV will travel to Groveton on Saturday, September 3 to compete in the Groveton JV Tournament. The JV team will be on the road again on Tuesday, September 6 as they face Centerville at 5:00 p.m.

Junior High Volleyball
The junior high volleyball team will travel to Spurger on Thursday, September 8 to face the Lady Pirates in a 4:30 p.m. game.

Yellowjacket Cross Country
The Yellowjacket cross-county teams will have their first meet on Wednesday, Sept. 7 in Broaddus. The high school races will be run in heats, due to the large number of schools participating. 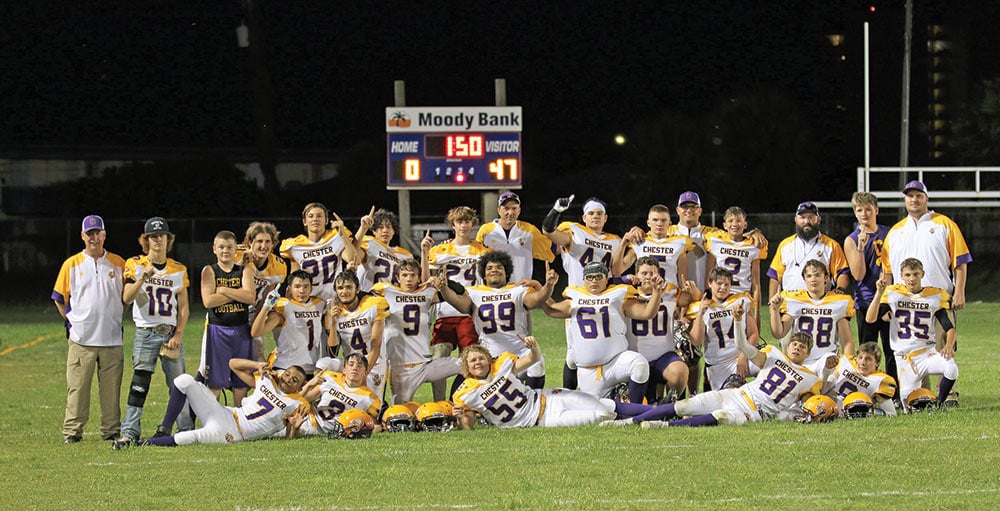 The Chester Yellowjackets blew out the Buccaneers from Galveston O’Connell last Friday, August 26 by a score of 47-0. PHOTO BY SANDY GILZOW 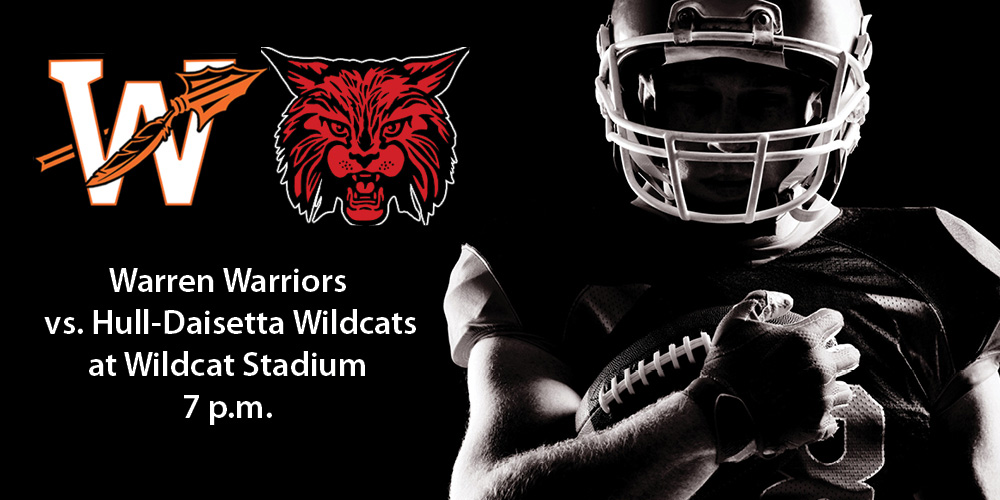 The Warren Warriors earned a hard-fought victory in their opener last Friday against the Hardin Hornets on Warrior turf.
The Warriors overcame a 13-13 tie in the second quarter to seal the deal in the third with a pair of touchdowns to finalize the score 27-13 for the remainder of the game.

Above: Warrior RB Brayden Renfro runs the ball. Left: A pair of Warriors takes down a Hornet’s attempt.
The Warriors play Hull-Daisetta this Friday in an away game. 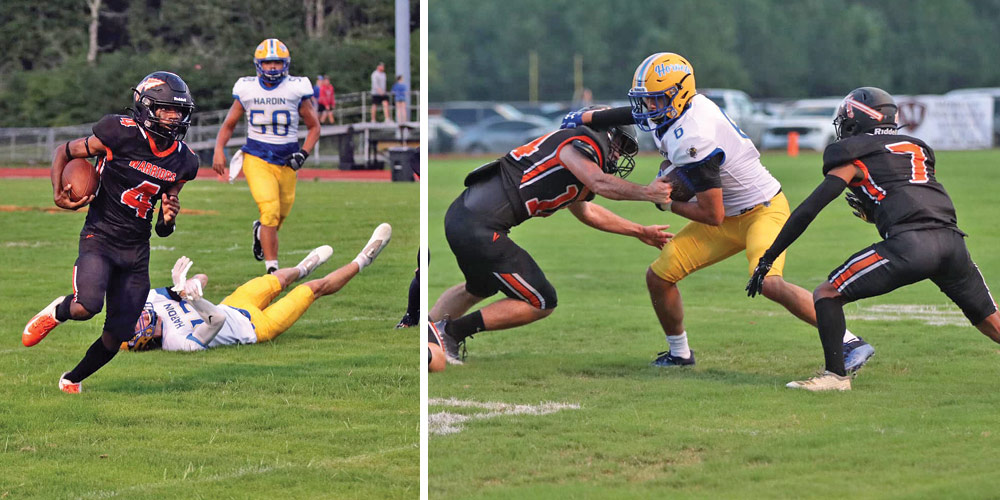