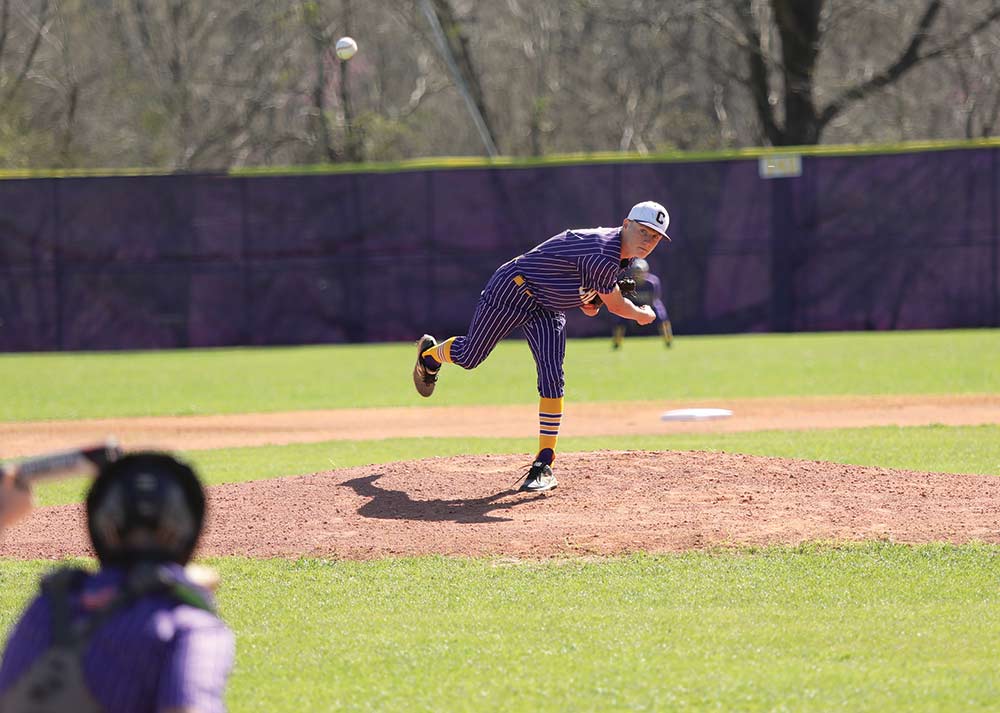 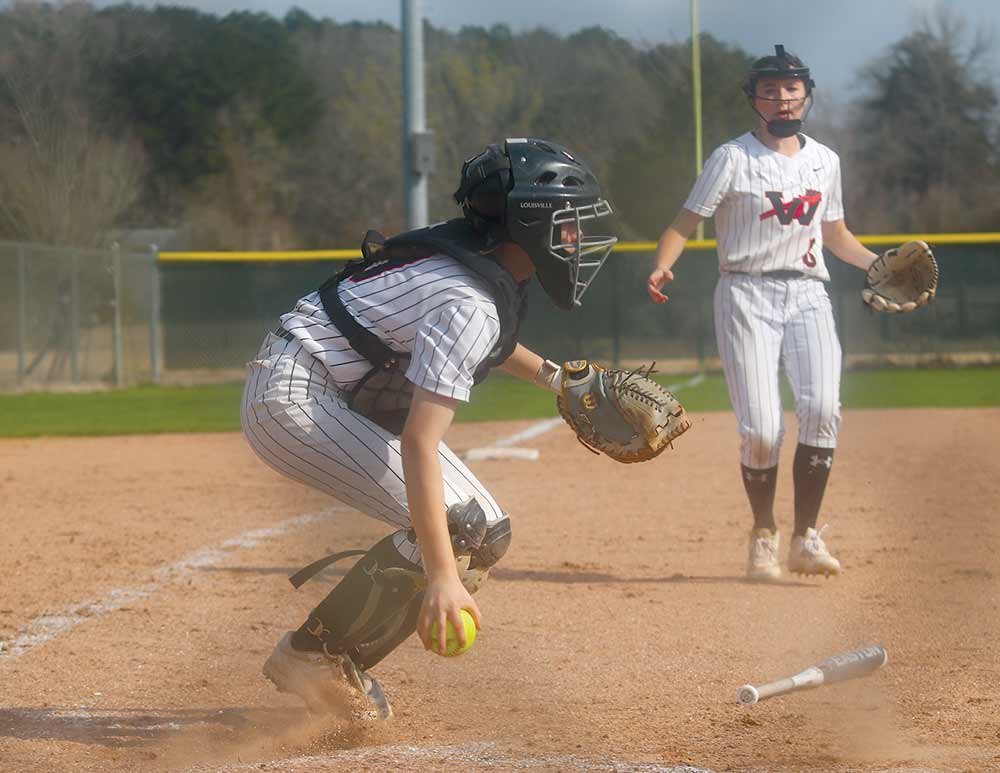 The Warren Lady Warriors played at the Groveton tournament recently where they went 5-0. They also beat Buna 5-2 in their first district game of the season, and will be battling for a playoff spot this season. In the victory over the Groveton Lady Indians, catcher Emma Jeansonne (pictured) grabs the bunted ball and prepares to fire it to first to secure the out; third baseman Mikayla Baker looks on. Photo courtesy of Warren ISD Yearbook staff 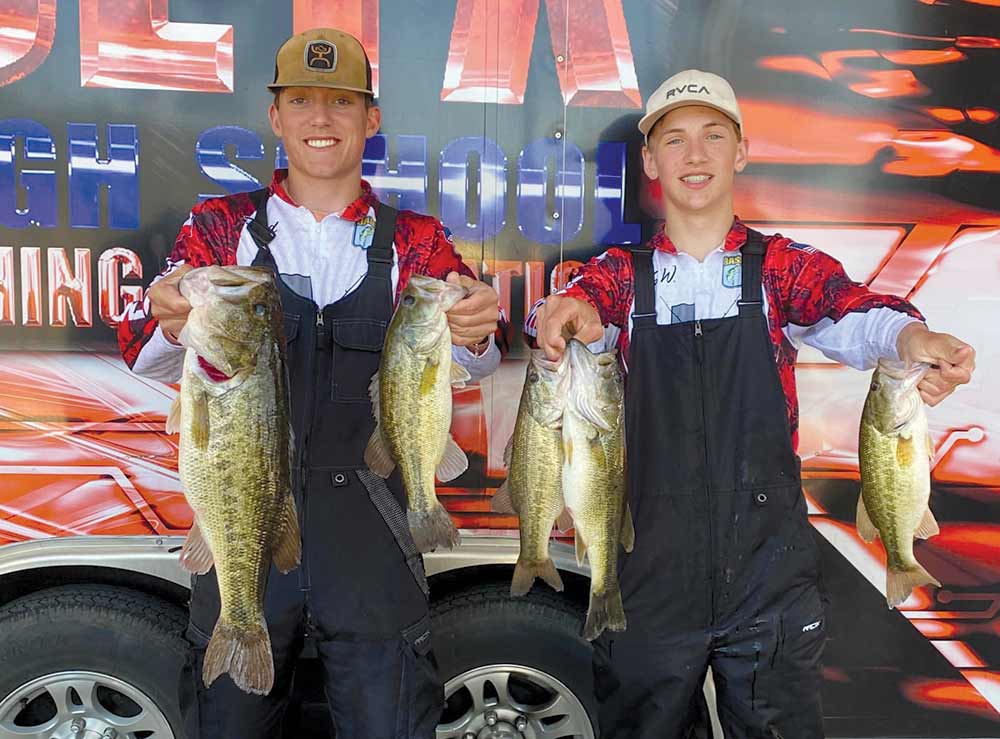 Colmesneil High School anglers Reed Best and J.W. Mitcham competed in the SETX High School fishing tournament last Saturday and won some money. More than 500 teams competed in the SETX tournament. With Justin Mitcham as their captain, Reed and J.W. had a limit of fish and Reed landed a 7.10-pound bass. It was a beautiful day to be out on the water and it was an added bonus to place in the tournament and catch a hefty fish. 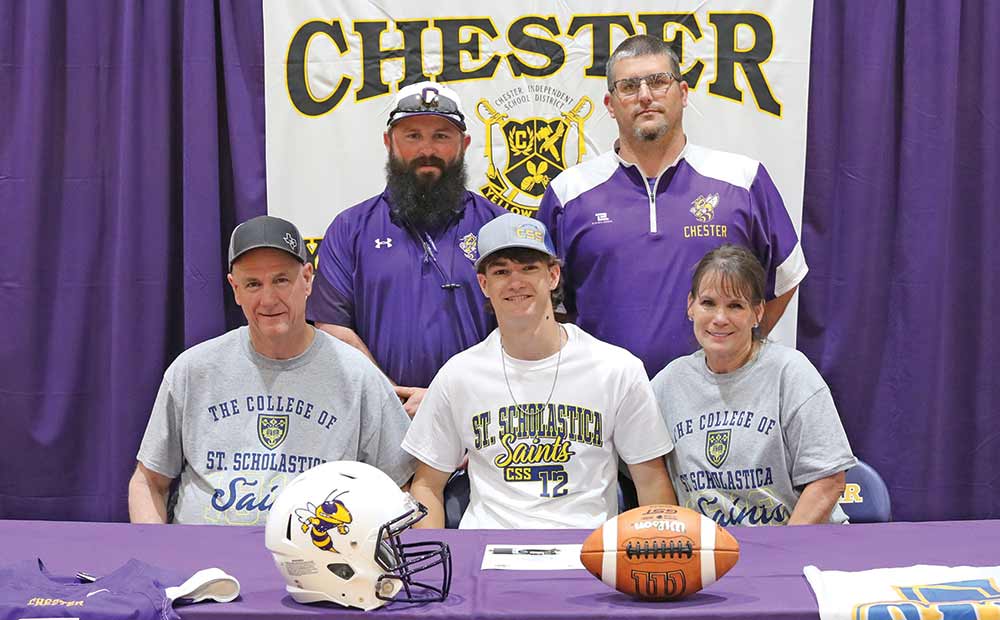 One of the most exciting moments for a high school student athlete is getting an offer to play sports on the collegiate level.  Chester Yellowjacket Carson Thomson has decided to accept the offer to play football and further his academic studies at the College of St. Scholastica in the fall.

The institution is located in Duluth, Minn. Thomson received this offer with the help of his head football coach, Justin Hilliard.

Hilliard has been impressed with Thomson since summer workouts.  Thomson encouraged his teammates to come up during the summer, to get stronger and start getting in shape.  He held his team accountable and pushed them to be better.  Thomson has been just as successful in the classroom.  He received Academic All-State honors for both football and basketball this season.

These are just some of the reasons why Hilliard has been putting in work getting schools to look at Thomson.  St. Scholastica impressed Thomson the most.  In addition to his athletic offer, St. Scholastica also offered him an academic scholarship.  The coaches at St. Scholastica see huge potential in Thomson.  They feel that he will fit in well with their team and be an asset to their football program.

The Yellowjackets defeated the Colmesneil Bulldogs last week 14-8 in Colmesneil.  This was the first time Chester has won against the Bulldogs since 2010.

Coach Coleman Butter, who previously coached baseball at Colmesneil, was happy with his team.  He said, “We played well and are continuing to improve. It was a great game to be a part of”. Peanut Fann struck out nine Bulldogs in the 5-1/3 innings that he pitched.

Waylon Sturrock came in relief to close the game out for the Jackets and did a great job.  Offensively, the Jackets combined for 16 hits.

Nearly every player in the starting lineup had a hit during the game.

Carson Thomson led the way with four hits, two runs scored, and 3 RBIs.  Ethan Vinson and Jack Rayburn were big parts as well with 3 hits each.  Vinson and Rayburn both hit doubles that scored 3 runs each.  Cole Clarke, Luke Read and Fann had multiple hits as well.  Butter added, “It was a combined team effort for sure”.

The Jackets hosted West Sabine last week for a district game against the Tigers.  West Sabine is currently at the top of the 2A teams in the district.  The Tigers pitched their ace, Karson Lane, who is the reigning District MVP.  The Jackets battled and put a number of hits together, but just couldn’t get ahead of the Tigers.  Carson Thomson started us off on the mound, going for three innings and striking out three batters.

He allowed just six hits in three innings.  Trayce Knox and Waylon Sturrock came in relief.  The Jackets runs were scored by Cole Clarke and Ethan Vinson.  Cutter Lowe, Will Thomason and Peanut Fann all had hits on the night as well.

The Yellowjackets hope to bounce back this week as they host the Burkeville Mustangs on Friday, March 25 at 4 p.m.  The Jackets will be back at the ballpark the next day to take on the San Augustine Wolves.  This Saturday match-up will get started at 11 a.m.

The Yellowjackets will be back at home on Tuesday, March 29 as they will play the Leggett Pirates at 4 p.m.  Come catch one of these home games and come hungry.  The Alex Johnson Memorial has a fantastic concession stand for home baseball and softball games.

The Lady Jackets suffered their first district loss last week as they were defeated by the Colmesneil Lady Dogs.  Even though the Lady Dogs ended the game with just a few earned runs, the Lady Jackets could not overcome costly mistakes.

The Lady Jackets ended last week with a victory over the West Sabine Lady Tigers.  The Lady Jackets won the game 5-4, and gave West Sabine their first district loss in over five years.  Olivia Gilzow did a great job pitching for the Jackets and the team did well at the plate.

The Lady Jackets play at home on Friday, March 25 at 4:30 p.m. as they host the Woden Lady Eagles. 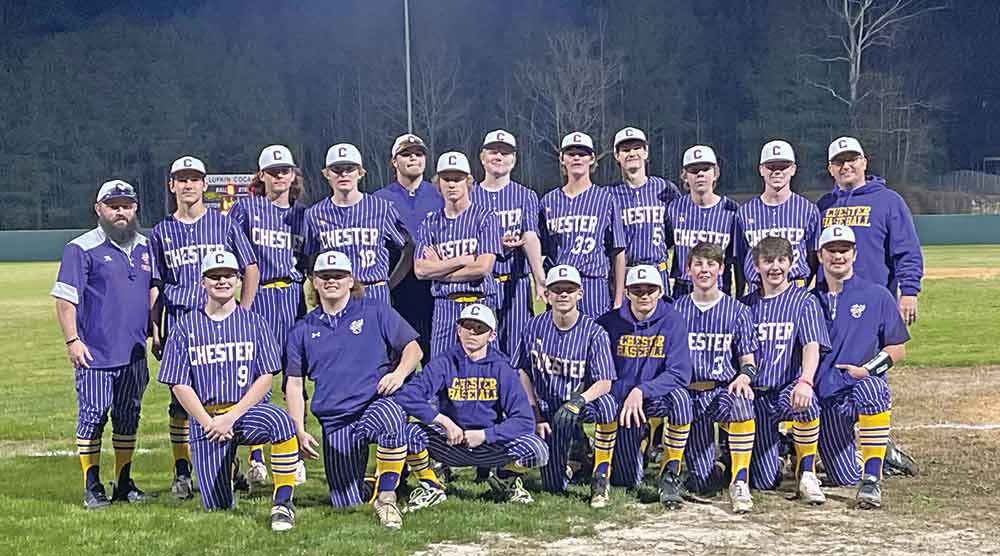 The Jackets played in the Latexo Baseball Tournament last weekend, and ended up taking home second place. The Jackets defeated host team Latexo on Friday 18-0. Peanut Fann went 3-3 with 3 hits and drew a walk. He scored four runs during the game.  Carson Thomson went 4-4 and scored 3 runs.  Jack Rayburn went 2-2 on 2 hits, 1 walk and scored two runs. Rayburn also had 2 RBI’s. Colton Pursley went 2-2 on 2 hits and 1 walk and had 1 RBI.  Luke Read went 2-3  with two hits and 1 RBI.  Trayce Knox and Chase Bertrand allowed no runs in a combined effort on the mound.  Both Knox and Bertrand struck out two batters each.

The Jackets faced off against the Centerville Bulldogs last Friday, and won 5-4.  The team ended the game with 5 runs on 15 hits.  The Jackets were up, but the Bulldogs battled back to try and take the lead late in the game.  The Jackets overcame and won in an exciting finish.  Waylon Sturrock struck out 6  batters and allowed 3 hits.  Peanut Fann struck out 4 batters.  Peanut Fann went 3-3 and had 3 hits, scoring 3 runs.  Carson Thomson and Carsyn Whitworth both had 2 hits and an RBI each.  Jack Rayburn went 3-3 and hit a double.  Zayne Barnhart and Colton Pursley also con-tributed greatly with 2 hits each.  Ethan Vinson was hit by 3 times out of 5 at bats during the weekend tournament.

The Jackets lost to Normangee 0-12 in the championship game.  The team battled throughout, but couldn’t overcome mistakes. Normangee had an impressive team and threw a great pitcher against the Jackets.  Their pitcher had 11 strike outs during the game.