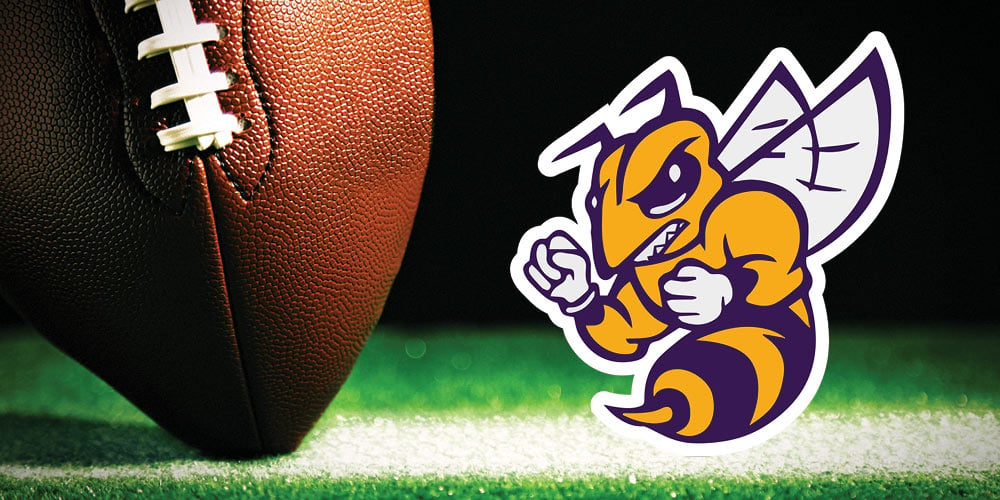 The Chester Yellowjackets traveled to Houston on Saturday to take on the Emery Weiner Jaguars. The Jackets fought hard all four quarters, but the Jackets ended up losing 54- 68. Kessler Romo ended the game with 40 yards rushing and 103 yards receiving, with a total of four touch- downs.

Rick Carlton had a 59-yard fumble return for a touchdown. Coach Justin Hilliard said, “All in all, it was a great game. Emery is ranked #1 in the state in TAPPS and are the de- fending state champions. To come in and push them and have the lead with 6 minutes left shows the determination this Chester team has to win.”

The Yellowjackets will host the Apple Springs Eagles on Friday, Sept. 30, which is Homecoming for the Chester Yellowjackets. This Apple Springs team has a winning record this season. Their quarter- back is very accurate and athletic. They also have a 350 lb. fullback that moves well and is tough to bring down. Hilliard added, “This will challenge our ability to play assignment football and to execute on the offensive side of the ball.” Kickoff between the Jackets and Eagles will be Friday at 7 p.m. The Homecoming Queen will be crowned during halftime.

Hilliard said, “Overall, the team is learning. We aren’t quite at the same level as other teams, but we are growing and competing every week.”

The junior high played at Apple Springs on Wednesday, Sept. 28 at 6 p.m.

High school boys medalists were Travis Zulpo, Kai Hilliard, Jack Ray- burn, Kevron Green, and Chase Bertrand. Kyli Handley was the top high school girl runner with a 17-minute 2-mile run. Junior High top girl runners were Hailey Purvis, Sadie Garsee, and Carlen Sluga, all within 15 seconds of each other. The top junior high boy runner was Russell McDonnald. Coach Crystal Muncrief was so appreciative of everyone who helped out with the meet and supported the athletes.

The high school and junior high teams will travel to Zavalla for a meet on Wednesday, Sept. 28.

High school races start at 1 p.m., and junior high races will begin at 3:30 p.m. The teams will have a week off for the Tyler County Fair but will use that off time to practice and get ready for the district meet, which will be held on Wednesday, Oct. 12 at Camp Ta-Ku-La.

This was another great week for the Lady Jacket Volleyball program. In the latest Texas Girls Coaches Association State Volleyball poll, the Lady Jackets came in ranked #13 in the 1A division. The week started off with a dual match for the Varsity Lady Jackets as they put their undefeated home record on the line versus Apple Springs and Good Samaritan. These two matches would also be the final tune-ups before they enter district competition. In the first match against Apple Springs, the Lady Jackets played arguably their most dominant set of the season as they blitzed the Lady Eagles 25-4 in game one. During that game, Lauren Citrano got the Lady Jackets off and flying as she served 9 points in a row to put the squad in a comfort- able lead. In game two, Kyli Handley led the charge from the service line by serving for 6 points.

Game two was much like the first game as the Lady Jackets won it 25-11. Lily Read got 7 more kills. Emma Byrd served two aces and added 6 more assists. Kaylee Tolar picked upa huge block during game two. Abby Grimes, Saydi Handley, and Kyli Handley each had four digs. Game three saw the Lady Jackets finish the Lady Hornets off with a 25-18 win for the 3-0 sweep. The follow- ing statistics are for the two games combined. Lauren Citrano and Kyli Handley each served 13 aces, Lily Read had 38 kills, Emma Byrd had 50 assists, and Kyli Handley had 23 digs. On Friday, the Lady Jackets opened up district play against the Burkeville Lady Mustangs, sweeping them 3-0 with scores of (25-9), (25-6), and (25-15). The Lady Jackets were led by Lily Read with 21 kills, Emma Byrd with 14 assists, Kaylee Tolar with 6 aces, and Kyli Handley with 15 digs. Coach Patrick Sluga had this to say about the win, “I’m glad we were able to go on the road and get that very important first dis- trict win. It’s always tough to win on the road and to come in here and dominate like we did says a lot about these girls. Sluga also added, “We are at the ‘taking it one game at a time’ part of the season. Each one of our opponents will get our full re- spect and we will be focused solely on them until our match with them is complete”.

Sluga believes this mentality will help the Lady Jackets achieve their goal for district, which is to be un- defeated District Champions.