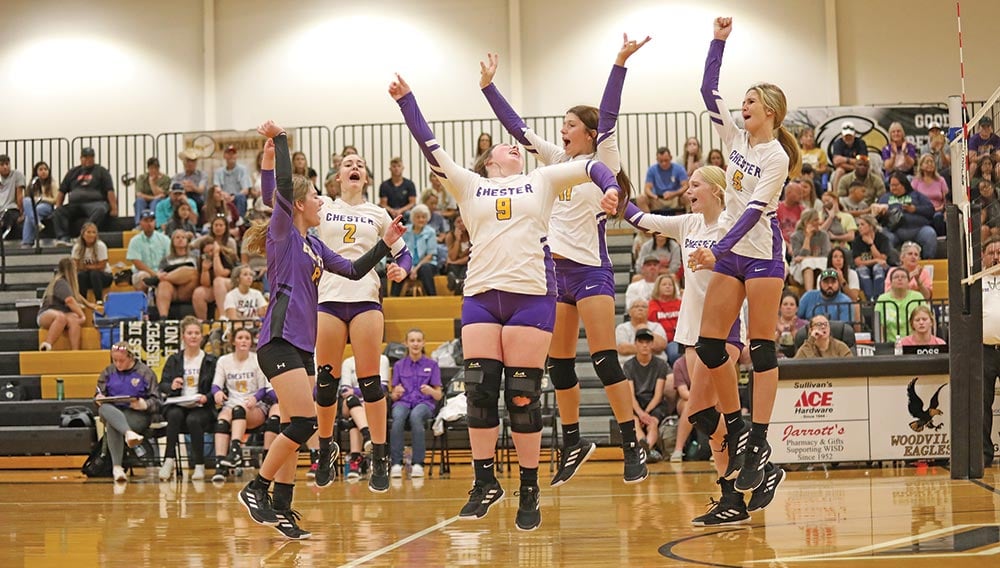 A jubilant group of Lady Jackets celebrates a win at the Woodville tournament. Photo by Jana Rayburn

The Lady Jacket volleyball team had a great first week of play. The Lady Jackets swept the Sabine Pass Lady Sharks on Tuesday, August 9 at J.P. Johnson Gymnasium in Chester.

Thursday, August 11, the Lady Jackets traveled to Woodville for the first day of the Woodville Volleyball Tournament. Chester easily defeated Woodville JV in two sets but lost a close game to Warren. The Lady Jackets came back Friday, winning all three pool games against Colmesneil, Hemphill, and Anahuac. Saturday’s bracket started with a game against Woodville.

The Lady Jackets lost the first game 20-25, won game two 25-15, and won the third game 15-12. This win moved the Lady Jackets into the championship game against Tarkington. The Jackets had some unfortunate injuries during the game, and ended up losing 25-23, 20-25. The Lady Jackets faced some larger schools, and never gave up. While this was a total team effort, several players stood out during the three-day tournament.

Lily Read, Marae Pounds, and Kinsley Barnes led in kills. Emma Byrd has some great assists and key points. Kaylee Tolar and Lauren Citrano served the ball well. Blakeney Whitworth had well-timed timed hits, Kyli Handley had a few great digs and saves, and Abby Grimes had some good back row attacks. Coach Patrick Sluga said, “The final game didn’t end up the way we wanted, but these girls played until the very end. Everyone will be talking about Chester volleyball after last weekend.”

The Lady Jackets will play in the Groveton Tournament on Thursday, August 18, and Saturday, August 20. Chester will host Groveton on Friday, August 19 for JV and varsity games. The JV game will start at 4:30 p.m., with the varsity game to follow. The varsity team will travel to Apple Springs on Tuesday, August 23 to face off against the Lady Eagles in a 4:30 p.m. match.

The Chester Yellowjackets traveled to Sugar Land for the first scrimmage of the season. Even though the team left very early in the morning, they showed up and turned some heads last weekend.

Defensively, the Jackets were tough. Jesse Bittick had 23 tackles during the scrimmage, including 10 for loss. Kessler Romo had an interception. Keighen Green had a big day, scoring three touchdowns.

Coach Justin Hilliard was happy with his team. “There are some minor corrections to be made, but we moved the ball well on offense and had some really good defense,” Hilliard said.

The Jackets will traveled to Houston on Thursday, August 18 to scrimmage against Emery Weiner. The scrimmage will started at 6 p.m.