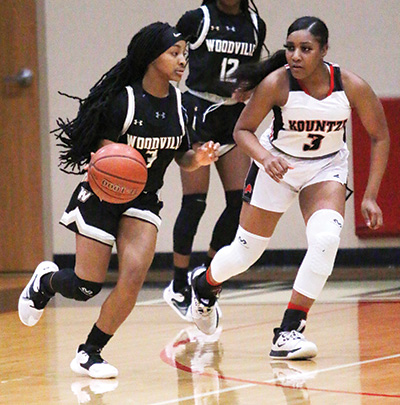 Jordyn Williams gets down the court for the Lady Eagles against the Kountze Lady Tigers last week. The Lady Eagles continued their perfect record in district (9-0) and an overall 25-4 record for the season with their 45-27 come-from-behind win against Kountze. PHOTO BY DANNIE OLIVEAUX By Jana Rayburn

The Yellowjacket basketball team has finished their first round of district play and are 3-3, getting wins against Goodrich, High Island, and Burkeville.  The fight for a playoff spot will be a tough one for the Jackets.

The Yellowjackets easily defeated the High Island Cardinals in front of a home crowd last Tuesday, Jan. 18 at home.  59-18.  Jack Rayburn led the team in scoring with 21 points.  Also scoring double-digits for the Jackets were Luke Read with 11 points, and Rick Carlton with 11 points.

The Jackets traveled to Zavalla on Friday, January 21 to play against the Eagles.  The Jackets had a tough night, and were defeated 20-46.  Luke Read, Carson Thomson, Bradley Davison, and Kessler Romo each had four points.  P.J. Purvis had two points and both Jack Rayburn and Jeff Knox added a free throw.

The Yellowjackets will travel to Goodrich on Friday, Jan. 28, as they attempt to defeat the Hornets for the second time this season.

The Lady Jackets will be on the road on Friday, January 28, as they face the Goodrich Lady Hornets.  The game will get started at 6 p.m.

The Chester Athletic Booster Club will hold the annual Wild Game Supper on Saturday, Feb. 5 at 6 p.m. in the Chester ISD Cafeteria.

This has been a much-anticipated event for the past several years, and this year will be no different.  There will be plenty of ‘wild’ food, but also things to eat for the squeamish.

The Alex Johnson Memorial will hold a volleyball and cornhole tournament on the same day.