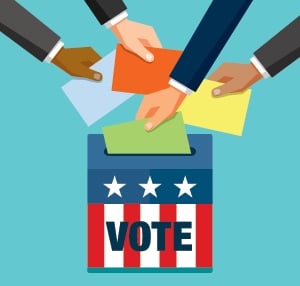 TYLER COUNTY – On May 7, Tyler County residents have an opportunity to vote on proposed state constitutional amendments, as well as decisions on the ballot for school districts and other political subdivisions.

“In the upcoming May 7 election, every Texas voter will have the opportunity to vote on two proposed amendments to the Texas Constitution concerning property taxes, and many Texas voters will also be voting on mayoral, city council, and school board candidates as well as local propositions,” Secretary of State John Scott said.

Along with two proposed constitutional amendments on the ballot, which voters will vote “for” or “against,” there are two other items up for a vote, a bond election for Woodville ISD and a proposed sales tax to benefit the county’s Emergency Service District #5.

The WISD bond election brings to the table for voters a $47,850,000 package of bonds for district-wide improvements. The recommendation to go out for a bond election came after a study conducted by a district facilities task force, comprised of Woodville residents, businesspeople and WISD staff members.

Among the scope of improvements that would be covered by the bond, if approved by voters, are a new Pre-K to fifth grade elementary school building and additions to the Career and Technical Education Center.

The ballot item pertaining to ESD #5 reads on the ballot as “adoption of a local sales and use tax in Tyler County Emergency Service District #5 at a rate not to exceed one and one-half percent in any location in the district.”

The sales tax would benefit the Dam B Volunteer Fire Department, if approved, and will not affect county tax levies in any way.

For the constitutional amendment proposals, which were approved by a two-thirds vote of the Texas Legislature during its recent special sessions, the descriptions on the ballot are as follows:

Proposition Number 1 (SJR 2) SJR 2 proposes a constitutional amendment authorizing the legislature to provide for the reduction of the amount of a limitation on the total amount of property taxes that may be imposed for general elementary and secondary public school purposes on the residence homestead of a person who is elderly or disabled in order to reflect any statutory reduction in the maximum compressed rate of the maintenance and operations taxes imposed for those purposes on the person’s homestead from the preceding tax year.

The proposed amendment will appear on the ballot as follows: “The constitutional amendment authorizing the legislature to provide for the reduction of the amount of a limitation on the total amount of ad valorem taxes that may be imposed for general elementary and secondary public school purposes on the residence homestead of a person who is elderly or disabled to reflect any statutory reduction from the preceding tax year in the maximum compressed rate of the maintenance and operations taxes imposed for those purposes on the homestead.”

Proposition Number 2 (SJR 2) SJR 2 proposes a constitutional amendment increasing the amount of the residence homestead exemption from property taxes for public school purposes from $25,000 to $40,000.

The proposed amendment will appear on the ballot as follows: “The constitutional amendment increasing the amount of the residence homestead exemption from ad valorem taxation for public school purposes from $25,000 to $40,000.”

Early voting for these items will run from Monday, April 25 through May 3. The polls are open from 8 a.m. to 5 p.m. during the early voting period. April 26 is the deadline to receive an application for a ballot by mail.

WOODVILLE – In a 12-minute meeting, the Woodville City Council tackled one agenda item and recognized a pair of citywide proclamations.

Jones read aloud the proclamation pertaining to child abuse awareness and prevention, which included statewide and countywide statistics on abuse and/or neglect of children from the previous year.

Members of the county’s Child Welfare Board, as well as a CASA representative, were on hand to recognize the city in its honoring of the proclamation.

Jones also informed everyone present that Sunday, April 24 is observed as “Blue Sunday,” and encouraged everyone to wear blue to show support of awareness of child abuse prevention.

When Jones led the council into the regular agenda, aside from the regular consent docket, there was only one item up for a vote.

City Administrator Mandy Risinger spoke to the agenda item, which was to consider for approval a “no response” to this year’s consumer price index adjustment to the municipal telecommunications right-of-way access line rate.

As Risinger explained, the Public Utility Commission recommends the rate it feels appropriate for the use of ROW access. The rate is passed on to utility consumers, both residential and non-residential. 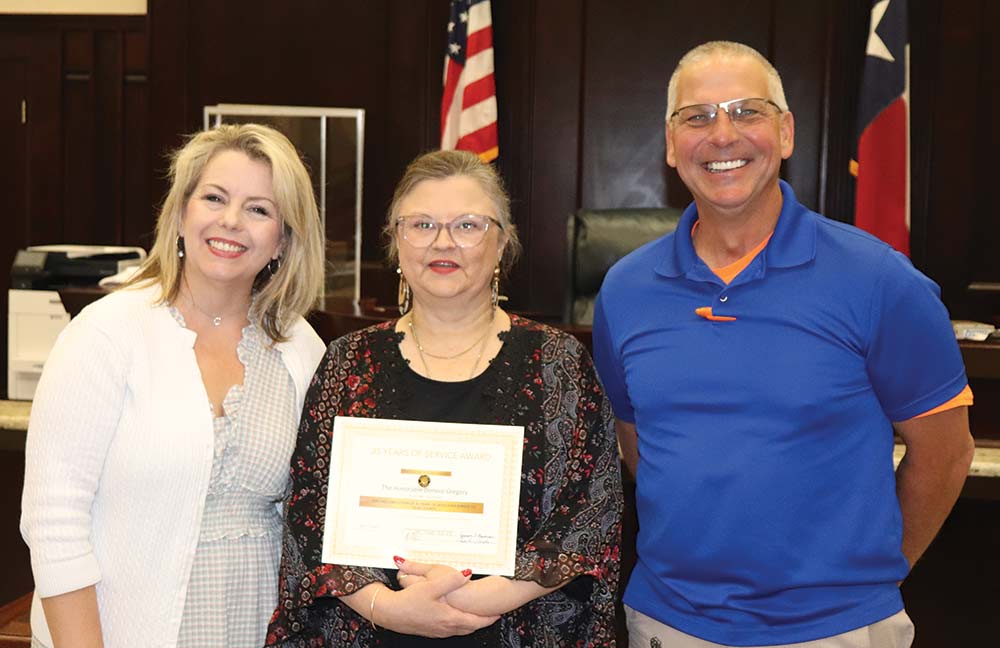 WOODVILLE – Unity within Tyler County was a theme expressed by many speakers at Monday morning’s meeting of the commissioners court.

The meeting had to be moved to the district courtroom to accommodate the large crowd. The first speaker to address the commissioners and the crowd during the public forum portion of the meeting was Woodville businessman and community leader Lonnie Grissom.

Grissom said he’d gotten a group together to encourage the officials, and to “use our tongues to build one another up, not tear one another down.”

Grissom led the group, which included other leaders in the community, such as Ivanhoe Mayor Cathy Bennett, to walk through the courtroom and shake hands with all of the officials. Prior to leading the group, Grissom cited several verses from the Book of Proverbs to encourage unity.

Other speakers, including Milton Odom, Colin Bishop and Rusty Hatton, spoke in encouragement to the officials, and appreciation for their service.

Sal Baldovinos, representing Concerned Citizens of Tyler County, approached the podium, and acknowledged that his presence could be seen as divisive. He offered an apology to the court for any perceived adversarial behavior caused by his and the CCTC investigation into the county’s distribution of American Rescue Plan Act (ARPA) funds, particularly with the premium pay to elected officials last year.

Baldovinos spoke about the ARPA funds and said in a review of federal and state documents he’d “come up short in finding any authority to distribute [ARPA funds] to elected officials.”

He concluded his five minutes of allotted time with a demand for those officials who received the $3,500 amounts from ARPA funds to return the money.

In a press release from CCTC, it is stated that the funds were “taken under purported authority of ARPA for the personal use of elected officials were taken without Constitutional authority.”

The window of time Baldovinos and CCTC gave the officials to return the funds to County Treasurer Leann Monk is 20 days.

“Alternatively, if they don’t believe they need to return the money, provide to us, your Constituents; the residents of Tyler County, the legislative provisions within the U.S. Constitution that gave this court the authority to do so use ARPA to pay [premium pay to elected officials],” the press release further states, and also states that officials “may be subject to losing their governmental immunity.”

On the regular agenda, the commissioners began with approving several resolutions and proclamations. The first up, was to declare April as Child Abuse Prevention Month in Tyler County.

Several members of the county’s Child Welfare Board, along with some CASA volunteers, were on hand to receive the proclamation.

The commissioners also approved resolutions to approve fireworks sales for Memorial Day, from May 25–30 at midnight.

An ordinance that was presented during the portion of the meeting set aside for proclamations and resolutions came from Tyler County Sheriff Bryan Weatherford. Weatherford presented an ordinance for the commissioners’ consideration to regulate game rooms in the county.

The ordinance, which spells out how and where gaming facilities can operate, was approved unanimously by the commissioners, later on the agenda, as an item to be voted on. 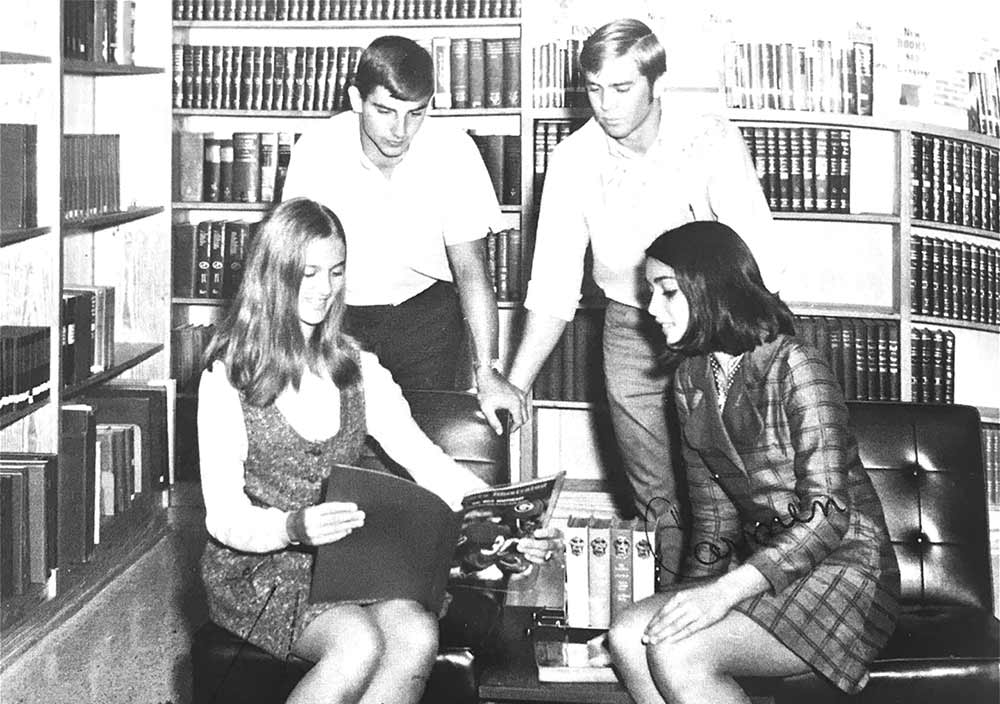 The event will take place at the Woodville Elementary Cafeteria, beginning at 10 a.m., with lunch to be served at noon. The theme for this year’s reunion is “Through the Decades,” and the classes of 1970-71 and ’72 are the special-honored classes, as they celebrate 50 years since graduation.

All alumni who graduated prior to 1972 are encouraged to attend.

To make reservations, alumni can contact their class agent, or Mary Alice Fortenberry-Hall, who is serving as reunion chairman, at 409-224-2617, for last-minute reservations to ensure that attendees are able to sit with classmates. 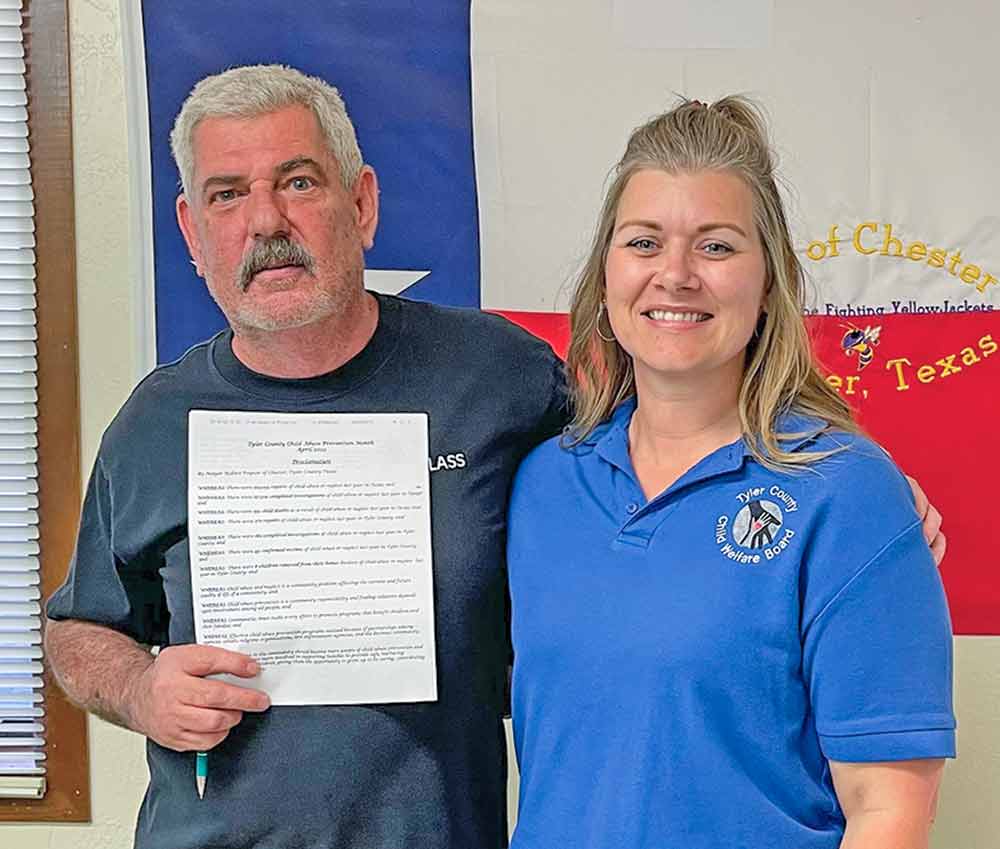