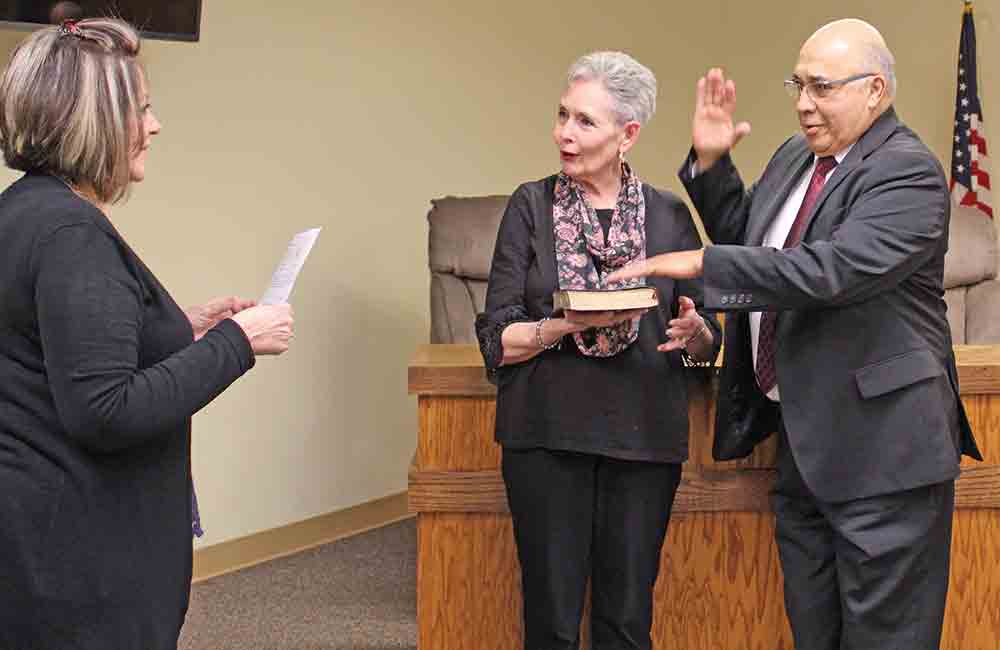 Sergio Ramos is sworn-in by city secretary Terri Bible to begin serving as the temporary municipal judge for the City of Woodville. Ramos’s wife Susan is also shown, assisting him in his swearing-in. MOLLIE LA SALLE | TCB

By Mollie LaSalle
neThis email address is being protected from spambots. You need JavaScript enabled to view it.

Mayor Amy Bythewood put his name before council for the appointment, and he was unanimously approved to the position to replace long-serving magistrate Judith Haney.

Ramos is well-known in the community, having recently retired from a 55-year post as one of the winningest tennis coaches in Texas High School history. Ramos began his coaching/teaching career at Woodville ISD in 1967; becoming head coach in 1970. Ramos led the tennis teams to several district wins (26 years in a row) and state playoff appearances through the years. “When excellence and winning become a tradition, everything falls into place”, he has been quoted as saying.

Also, he added, “Remember who you are and remember who you represent.” He officially retired from coaching/teaching last year, after he was persuaded to join the staff at Colmesneil ISD a few years back, to help get their tennis team in winning form. Under his guidance, CISD’s tennis teams have won district honors.

His final “retirement” coincided with the unveiling of a new state of the art tennis facility at CISD in 2022.

Ramos was named the Texas 3A Tennis Coach of the Year in 1989 and was inducted into the Texas Tennis Coaches Hall of Fame in 2008. Ramos is a Stephen F. Austin State University alum, earning bachelor’s and master’s degrees from the university in the 1960’s. He married his wife Sue, in 1969, after they met a Baptist Student Union get-together while both were students at SFA. He became a naturalized United States citizen in 1970. Ramos and his wife are long time members of First Baptist Church in Woodville, and he led several mission trips to Peru.

Before Ramos was sworn into his new position, he was quoted as saying “the last time I took an oath on a Bible, was when I became a US citizen.”