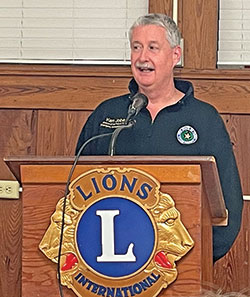 The club chartered in 1947 and is still going strong. The Woodville Lions are one of the few in the state, even the nation, that has its own building. Past Lions President and District Governor Ken Jobe keynoted with nostalgic memories and key moments with some of the older hands chipping in tidbits.

Jobe, who also serves as Pct. 2 Justice of the Peace, was recently made aware of Tyler County Courthouse cleaning spree that discovered boxes of old club documents; real treasures, like the original 1947 application and original minutes from the first years. Attendance hand recorded on old ledger sheets and minutes recorded by manual typewriters.

Jobe recalled how the founder of Lions International, Melvin Jones of Chicago, never even held the office of international president. However, he was a secretary, and the Woodville club’s 1947 charter, which has a proud place in the club house, is signed by Melvin Jones.

The highest honor in the Lionism is a Melvin Jones Fellowship, which the club purchases for select members, and Woodville has four, including recently deceased Tommy Weaver, a local accountant and retied WISD financial officer, who did the club’s taxes each year at no cost.

Jobe recalled the many fundraisers the club sponsored that have raised hundreds of thousands over the decades. In the ancient past, they sold brooms and light bulbs, the old incandescents, and a few boxes are still in storage.

Among the old hands still active is local insurance legend Steve Evans, a 40-plus year member, and who ramrodded the golf tournaments and rodeos.

For many years, they sponsored softball tourneys.

For a couple decades, they hired a couple of ladies who fixed the noon Thursday lunches and were quite famous for their fried chicken. Currently, they contract with WISD for lunches.

Jobe and the club was especially proud of its community help.  Last year, they gave about $10,000 in scholarships for local students. They regularly pay for the exam and glasses for needy students. And from time to time, at the discretion of the board, they are known to just help others.

Lions International helped clubs with marketing, and for decades “LIONS” stood for “Liberty Intelligence Our Nation’s Safety.”  That was shortened from 1940’s when “LIONISM” stood for “Loyalty Integrity Oneness Nobleness Initiative Success Merit.”

A real honor, Lion Secretary Connie Gibson had special pins for all members marking the 75th year of the Woodville Lions Club. Members wear the pins on their signature yellow and blue vests, accumulating them as the years go by.

They often have a program from local talent or governmental interest, and the club’s “Lions’ Den” is located just couple of miles east of town on 190.  They meet every Thursday at noon, with a meal, and guests are welcome, except on the second Thursday evenings, at 6:30 p.m.

You can see a photo of the 1947 charter, complete with bullethole, and other historic markers at PreciousHeart.net/lions.