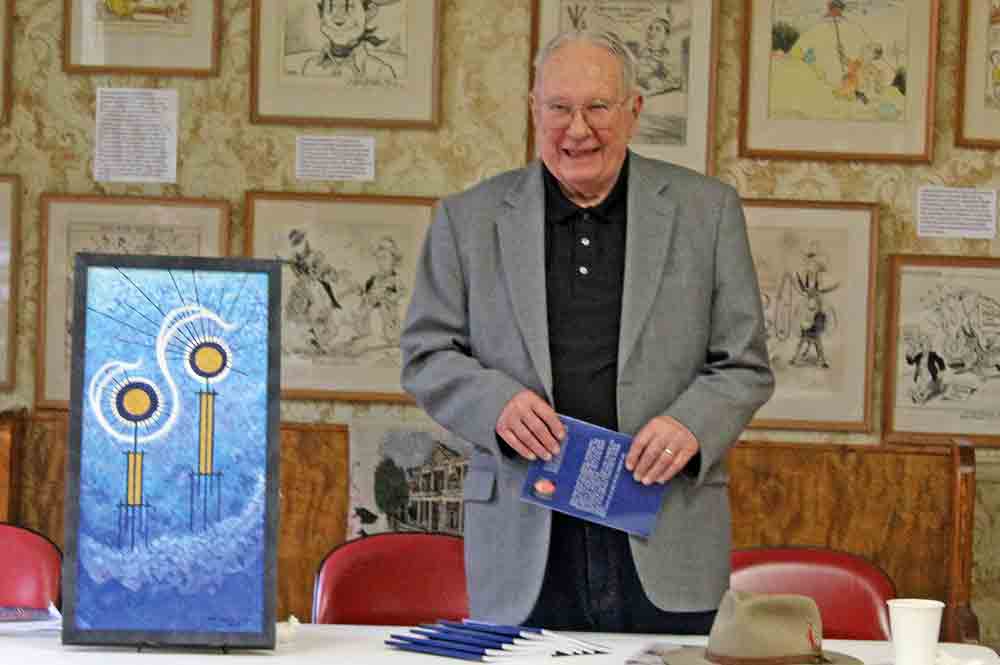 At 97, he showed very little of the advance of time; he struck this writer as having the stamina and appearance of someone at least 20 years younger.

Marsellos began reading selections from his book, and after about an hour, asked if it was alright with everyone if he sat down.

Marsellos was born in East Hampton New York in 1925. He is a WW II veteran, an accomplished architect, having designed several buildings in Lufkin at Angelina College, and several buildings at Stephen F. Austin State University. He has also designed numerous churches and homes in the region. Marsellos retired in 1991 after 35 years to devote all his free time to painting and writing.

Marsellos has written five books, the latest of which is a compilation of poetry titled Once I Had a Garden. It is a collection of poems written over a span of 65 years, which he wrote for his own satisfaction.

Woodville resident Chuck Royston and his wife Pat have known Marsellos for quite a few years. Royston, in his introduction, praised Marsellos as one of the finest people he has ever met. “He’s an accomplished architect, artist, and author of five novels, the latest which he will read from today.”

Royston recalled a time when his home caught on fire, and Marsellos and his wife offered for Royston and his wife to stay with them while their house was being repaired. “We didn’t live too far away from Floyd and his wife, so we graciously accepted their kind offer. We stayed for seven months. I offered to re-imburse Floyd for putting up with us, and initially, he refused. I finally convinced him to accept some of the insurance money from the fire.”

Royston’s wife Pat had these words to add: “His heart and his soul and his consciousness and his just giving spirit are of the purest nature, and it has been an unbelievable gift for Chuck and I to know Floyd.”

Back in the day, when Marsellos was pondering writing his first book, he approached Royston about how to get started. He told Royston, “a novel is rattling around in my head. It’s about Alexander the Great, and I have no idea how to write it all down.” Royston offered to help, and at the time, he taught writing at Angelina College.

He told Marsellos he would give him an outline of how to do it.

For his latest book, he had been writing down poems and thoughts on bits and scraps of paper throughout the last 65 years. With Royston’s help once again, Once I Had a Garden was born.

The cover of the book is an original painting by Marsellos, and Royston loved it so much that Marsellos gave it to him as a gift.

Dianne Amerine, who is the president of the Women’s Study Club of Woodville was Marsellos’ chauffer for the event; They were delayed arriving due to the fact that Marsellos’ batteries in his hearing aids had died on the trip from Lufkin. After a stop at the local Wal-Mart for new batteries, they arrived for the event, with Marsellos commenting that he felt like he’d “been born again” when he could hear once again.