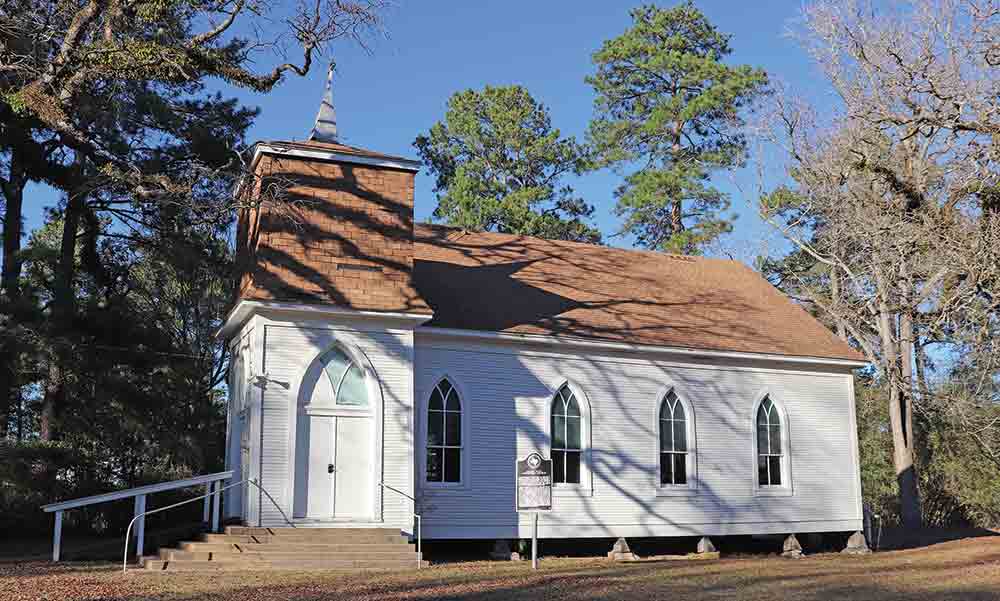 Built in 1853, the Mount Hope Methodist Church is now the home of a new congregation. Chris Edwards | TCB

CHESTER – Mount Hope Methodist Church, which was constructed in the 19th century as a focal point of the Mount Hope community, near Chester, is the meeting place for a new congregation of worshipers.

Last Sunday was the first meeting of the congregation, which is comprised of Methodists who wanted to remain part of the United Methodist Church (UMC).

and approximately 20 members of the congregation began organizing in October to remain part of the United Methodists.

In December, a session was called of the Texas Annual Conference of the UMC, which approved the disaffiliation requests of 281 congregations from across the state. Both Woodville and Spurger disaffiliated, and the Warren congregation is pending due to a technical issue.  The Texas Annual Conference is one of the four UMC regional conferences in Texas to approve the requests. In total, 546 of the 1,260 Texas UMC churches have left, according to a report in December.

The reasons for the divisions in recent years have owed to the UMC becoming more accepting of LGBTQ lifestyles, according to CBN News.

Springfield said in November, the members of the congregation who wished to remain as United Methodists met at his home with Rev. Morris Matthis, from the offices of the Texas Annual Conference. Matthis discussed with them what was needed to be done in order to form a new congregation. Once contact was made with Rev. Will Reed, also from the Texas Annual Conference, concerning the availability of the Mount Hope church for use, a lease agreement was put in place for the new congregation.

Now, with officers elected, bylaws approved and a new pastor, Rev. Ernie Turney, the church is meeting, and according to Springfield, the group has grown by about 20%. “As the word has spread, others have expressed interest. There is hope that others from Tyler County and Corrigan who also want to remain United Methodists will join our group,” Springfield said.

Mount Hope Methodist Church, according to records from the Texas Historical Commission, is likely the first Methodist church in Tyler County.

Aside from a nearby cemetery, the church is all that remains of Mount Hope, which faded when most of its residents relocated to Chester in the late 1880s, after the railroad came through and bypassed Mount Hope.

Services take place each Sunday at 11 a.m., and there are plans for a Bible study to be held during the week at a location in Woodville, which will begin soon, according to Springfield.

To get to the church, from Chester, take FM 1745 northeast to CR 2600, turn left and continue to CR 2615, then turn right and you will arrive at the church. Signs have been installed to help lead the way.

“Our goal is to make ‘Disciples of Christ,’ and our motto is ‘all are welcome’,” he said.