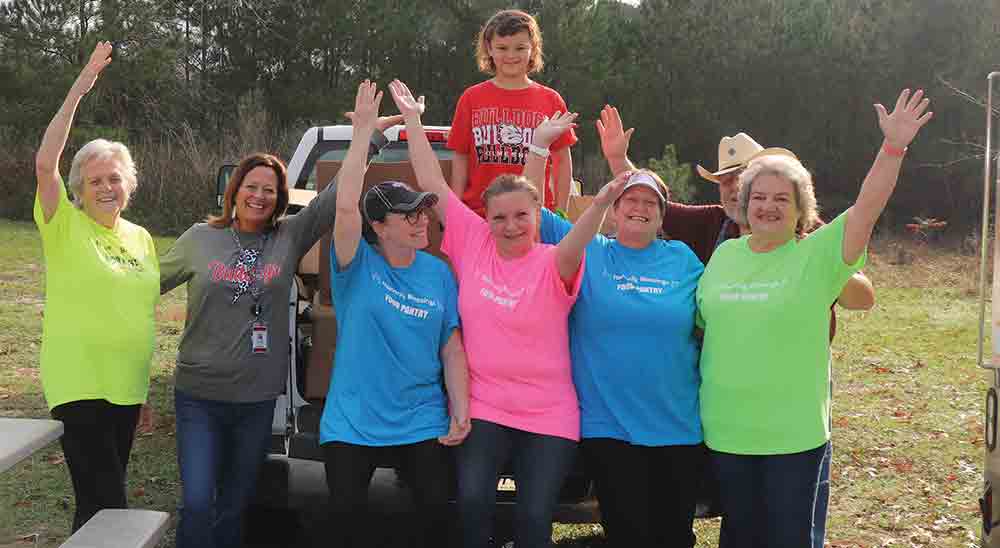 Miles Settlocker is celebrated by the volunteers of Heavenly Blessings Food Pantry in Colmesneil, as well as his teacher Shelley Rhodes (second from left). Settlocker’s gathered donations of close to 1,300 canned goods will go toward addressing food scarcity in the area. CHRIS EDWARDS | TCB

COLMESNEIL – On the morning of Thursday, Dec. 8, a truck from Colmesneil ISD made its way up US 69 to drop off a packed bed of canned goods at the Heavenly Blessings Food Pantry, at Tejas Road Baptist Church.

The person responsible for this large donation, which amounted to nearly 1,300 cans, was Colmesneil Elementary fourth-grade student Miles Settlocker.

Settlocker, the nine-year-old son of John and Dena Settlocker, was touched and inspired when he read about displaced people in war-torn Ukraine. He wondered about what he could do to help people in his own area who might be experiencing food shortages, according to his teacher Shelley Rhodes.

Rhodes said that Settlocker developed the idea for a canned food drive, for all of the elementary grades to participate. He made a flyer and passed it out to all of his fellow students two weeks ago, she said, and with each daily count of the donated goods, he would comment about how many more people the donations could help.

The classes made it competitive, as well, with the class that drew the most donations (Pre-K) earning a reward of a picnic.

When Settlocker, who came over in the truck with Rhodes, arrived at the food pantry on Thursday morning, they hauled with them close to 1,300 individual canned goods. Volunteers were amazed at the number of donations and spent a good portion of the morning unloading the boxes full of non-perishables into their storeroom to be ready for donating.

“It was a very selfless act on his part,” Rhodes said. “The whole focus was helping others. I was very proud of him.”