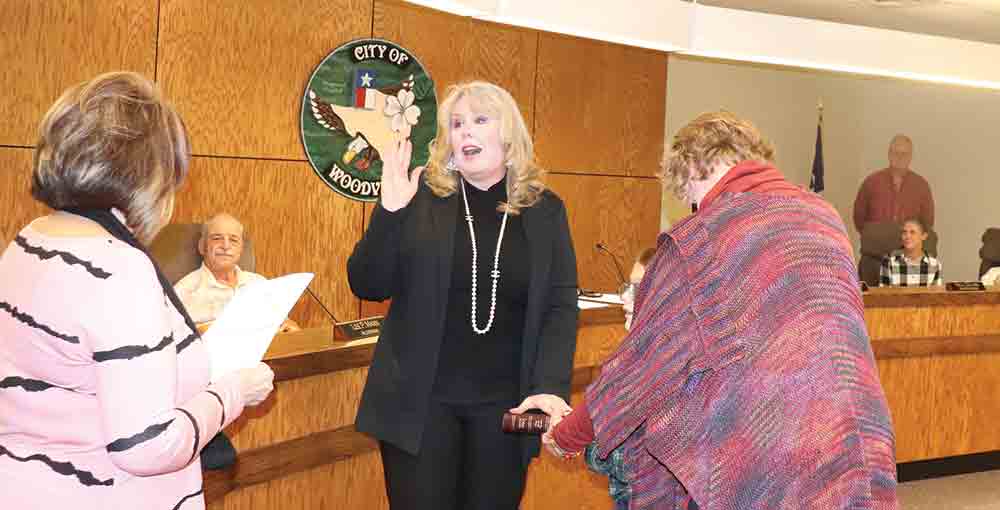 By Mollie La Salle
This email address is being protected from spambots. You need JavaScript enabled to view it.

WOODVILLE –  The City of Woodville has a familiar name at its helm again, with the swearing-in of a new mayor on Monday night at the meeting of the City Council.

Amy Bythewood took the reins as Woodville’s mayor after being sworn-in by city secretary Terri Bible. Bythewood is the second member of her family to serve as the city government’s leader. Her late husband Ben served as mayor from 2008-2014.

Bythewood’s mother, Toni Cook and her grandson Braden (aka Mr. Blue Eyes) assisted with the swearing in, holding Bythewood’s grandmother’s Bible at the ceremony.

Kelly Dillard was sworn to begin another term as Alderwoman Place 2, and Mike Cabaniss was sworn-in as Alderman Place 4.

Joyce Wilson was nominated mayor pro-tem by Kelly Dillard and seconded by Lee Mann. She was unanimously approved by council to continue in the position.

Bythewood wasted little time in calling the meeting to order and getting down to business. Council members discussed nominating someone as a small city representative to the DETCOG Board. City Administrator Mandy Risinger advised council that “the city was notified prior to Thanksgiving that based on the 2020 census numbers, Woodville has fallen below the threshold for representation on the board, with a population below 2,500, and does not get an automatic seat. The board does have three smaller seats for populations fewer than 2,500, and Lonnie Hunt with DETCOG recommended we submit a nomination for filling a seat.”

Alderman Cliff Wright was nominated to the DETCOG board by Dillard and seconded by Cabaniss; his nomination was approved. Risinger further explained that although the city does not get a vote on the board, city representatives are welcome to attend any and all DETCOG functions.

The county is represented by Pct. 1 Commissioner Joe Blacksher, who is a member of the DETCOG board.

At this point, council adjourned to executive session (at 6:11) and returned to regular session at 6:28, with no action to report. Council was unanimously adjourned for the evening at 6:29 pm.