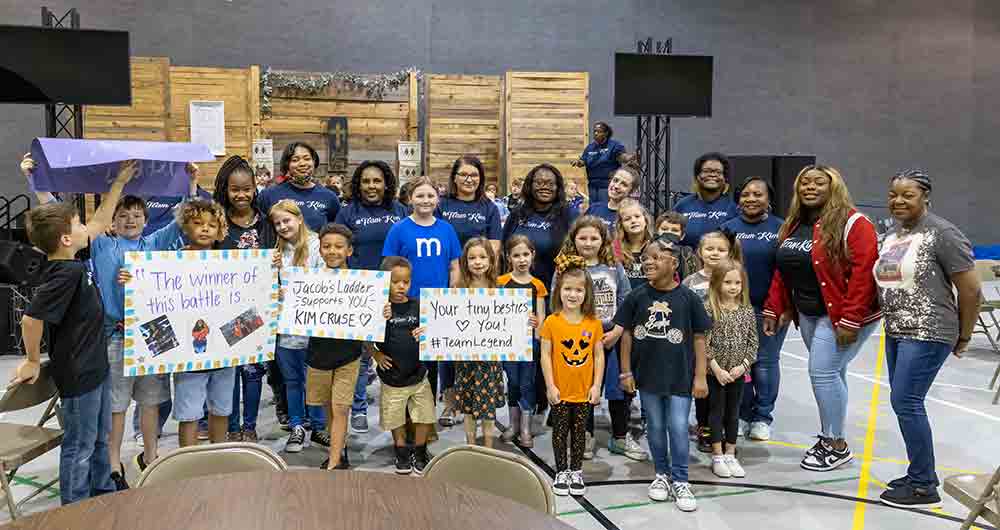 Kim with the kids at Jacob’s Ladder, who had a party for her on Friday at the Family Life Center at Woodville’s First Baptist Church. JIM POWERS | TCB

WOODVILLE – Woodville native Kim Cruse was feted with a community send-off parade last Thursday morning and also a Community kick-back and send off party Sunday afternoon at the city park.

The parade route Thursday morning was lined with signs and supporters as the caravan started off at 8:15. Starting at the fire station, going to each campus

then to Beech street, Hwy 190 to US 69 to Walmart and then back to city hall where Kim was given a proclamation by mayor Paula Jones.

Cruse was also feted with a send-off at the city park on Sunday, Oct. 30. She arrived on top of a fire truck (again), and everyone had a chance to meet and greet and get an autograph and Reverend Tracee Barlow was on hand to bring his message of unity and harmony. The community really has come together in support of Ms. Cruse as she leaves to go back to Los Angeles for the next phase of the competition on NBC’s the Voice, where she is a member of Team Legend (John Legend).

Monday’s show (Oct. 31) marks the start of Fan Week where fans get to pick what songs the contestants will sing. The Voice airs on Monday and Tuesday at 7 p.m. on NBC.