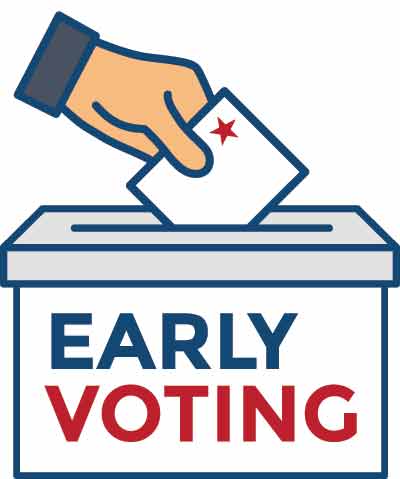 The early voting period for the upcoming Nov. 8 General Election will begin next Monday, Oct. 24 and will last through Friday, Nov. 4.

Voters across the state will decide several key propositions, either by showing up early during the window, or on Tuesday, Nov. 8, which is Election Day. This mid-term race finds Texans faced with the opportunity to keep or reject incumbent Gov. Greg Abbott, as well as several other officials on the ballot.

In terms of countywide races, a hotly contested race for County Judge drew not only a Democratic challenger but a write-in candidate, as well. Milton Powers, who currently serves as Pct. 3 Justice of the Peace, won the county’s GOP Primary in a run-off in May. Powers, the Republican nominee faces Democrat Wesley Whitman and Neil Alderman, a Republican running as a write-in.

Alderman, a Warren businessman, is not the only write-in candidate vying for a county office. Pct. 4 Commissioner Charles “Buck” Hudson is facing challenger Amanda Radke-Hastings in his re-election bid.

To vote by mail, applications must be received no later than Friday, Oct. 28, according to Secretary of State John Scott.

Several city and school district elections are also on the ballot in Tyler County. Voters who are serviced by the Woodville Independent School District have the opportunity to choose candidates for two positions on the WISD Board of Trustees.

Incumbent John Wilson is running for re-election of Place No. 6 on the board against challengers Kevin McQueen and Ben Shepherd. Place No. 7 incumbent Josh McClure drew opponent Eleanor Holderman.

On the Woodville City Council, the incumbent Alderman for Place 2, Kelly Cordes Dillard, is running against Lori Benthall. Place 4 Alderman has two challengers running for the seat left by Tony Greer, who opted to not run for re-election. Mike Cabaniss is running against Elizabeth Grammer for that seat on the council.

Spurger ISD has three seats on the ballot for this election. Incumbents Paul Bingham (position 7) and Brent Marcum (position 6) are running unopposed, while position 1 incumbent Forrest Anderson is running against challenger Jessica Hensarling.

Warren ISD voters have candidates running for positions 1, 2, 6 and 7 on the Warren ISD Board of Trustees. Incumbents Billie Read, Steve Moore and Blake Burkett are running unopposed for positions 1, 2 and 7, respectively, while position 6 incumbent Kimen Johnson is running against challengers Calvin Wallet and Marianne Pate.

Ivanhoe residents have a mayoral election and a council position to vote for. Mayor Cathy Bennett is running for re-election against challengers Skip Blackstone and Bob Stoneman. Incumbent councilmembers John Craven and Will Warren are running to keep their seats on the council against challenger Carolyn Williams.

• 65 years of age or older on Election Day

• Expecting to give birth within three weeks before or after Election Day.

• Absent from the county of registration during the Early Voting period and on Election Day.

• Civilly committed under Chapter 841 of the Texas Health and Safety Code.

• Confined in jail, but otherwise eligible.