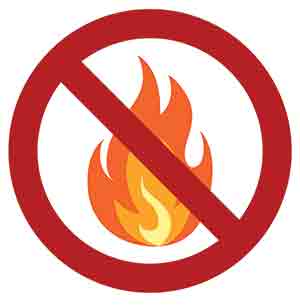 TYLER COUNTY — The county is under burn ban, as of Tuesday. It is the second one this year.

The county issued the disaster declaration burn ban effective 9 a.m. on Tuesday, Oct. 4 and according to the county’s office of emergency management, will be in effect until rescinded.

The lack of sufficient rainfall as of late has been a statewide concern, and fire analysts have cited the potential for significant wildfires throughout the pineywoods region, as well as southeast and central Texas.

In Tyler County, a burn ban was issued in June and rescinded in mid-August, following a brief period of plentiful rainfall.

A map published on Tuesday morning by the Texas A&M Forest Service showed that burn bans were active for 107 counties. At the time of the map’s publication, Tyler County had not been added, but neighboring Polk County was shown to be under a burn ban.

The dry conditions across the state have been “significant” as far as fires go, according to Wes Moorehead, who serves at the Texas A&M Forest Service Fire Chief.

Moorehead said that firefighters have responded, statewide, to more than 9,800 wildfires this year.

“The state received beneficial rainfall mid- to late-August, which helped to significantly slow the operational tempo for wildland firefighters. However, the benefits of that moisture have started to wane, and we are, once again, observing dry conditions across the state that is resulting in increased wildfire activity,” said Moorehead.

Burn bans occur when local governments are empowered to take action on the behalf of constituents when drought conditions exist. Burn bans are put in place by county judges or county commissioners to prohibit or restrict outdoor burning in the name of public safety.

According to the Texas A&M Forest Service, nine out of 10 wildfires are caused by human activity, which means that most wildfires could be prevented by taking simple actions.

“It is important that all residents take care to prevent wildfires while conditions are windy and dry,” said Karen Stafford, Texas A&M Forest Service Prevention Program Coordinator. “Consider waiting to conduct any outdoor burning or lighting campfires until conditions improve. Even if your county does not have a burn ban in place, we encourage everyone to be cautious with any activity that may cause a spark.”