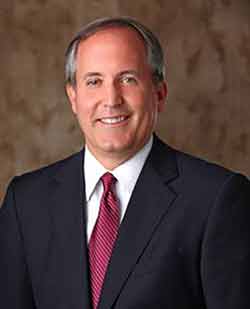 Ken PaxtonBy Chris Edwards
This email address is being protected from spambots. You need JavaScript enabled to view it.

AUSTIN – Last Tuesday Attorney General Ken Paxton issued an opinion on the use of funds from the American Rescue Plan Act (ARPA) as premium pay for county officials.

Paxton’s non-binding opinion was given in response to a request made in February by Tyler County Auditor Jackie Skinner.

In his opinion, Paxton cites the Sept. 13, 2021 decision by the commissioners court to provide a one-time premium payment to county employees and county officers using the ARPA funds. Skinner’s query had cited 152.013 of Local Government Code, which requires advance public notice of salary increases, expenses or allowances of elected county or precinct officials.

Ultimately, Paxton concluded that “a court could conclude that ARPA premium pay funds are not ‘salary’ for purposes” of the cited governance code section, and was akin to hazard pay, and henceforth not subject to public notice posting.

The county received its first allotment ($2.2 million) of the ARPA monies last year and the second round in July. In total, the county received $4.2 million from the federal government, allocated through a grant program, were designated to address emergency needs relating to losses stemming from the pandemic.

According to a certification of funds statement from Skinner, the funds can be used to support public health expenditures, address negative economic impacts caused by the pandemic, replace lost public sector revenue, provide premium pay for essential workers and to invest in infrastructure.

The distribution of the funds was a hotly discussed topic on the Facebook page Concerned Citizens of Tyler County (CCTC) and a representative, Sal Baldovinos, from that page demanded, during an April meeting of the Tyler County Commissioners Court that the officials return the money.

Baldovinos said that in reviewing federal and state documents he’d “come up short in finding any authority to distribute [ARPA funds] to elected officials.”

Following the issuing of Paxton’s opinion last week, Neil Alderman, who is running as a write-in candidate for Tyler County Judge issued a statement.

Alderman was formerly affiliated with the CCTC page but stepped down before announcing his run for office.

Alderman said that no citizen of Tyler County owes the current county commissioners or auditor “any apologies.”

He said that although county employees were eligible for premium payments, elected officials were not.

“So, our elected and appointed officials feel some sort of vindication by a pre-election opinion that stretched and contorted to imply there ‘could’ or ‘might’ be justification if the funds were given as ‘hazardous duty’ pay,” he said.