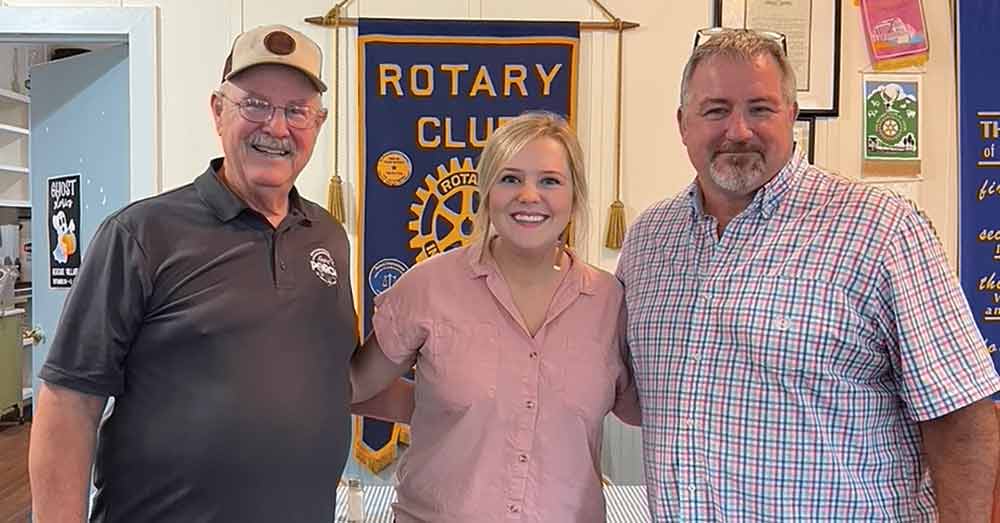 WOODVILLE – The Woodville Rotary Club hosted a delightful and informative presentation from John Bradford and his daughter Taylor Bradford Alvarez, owners of the Front Porch Distillery in Nacogdoches at their August 24 meeting at the Pickett House.

John had retired, and wanting to keep busy, decided to open a distillery. He told his daughter Taylor “we’re going to make alcohol”. Together with his daughters the Front Porch Distillery opened in early 2017. Taylor explained “It is a family-owned business, we have less than 10 employees, and it is a seven-day-a-week job.”

John is the head distiller/owner and Taylor is the president and marketing coordinator.

Front Porch produces a variety of spirits, their most popular being their barrel aged whiskey, rum and moonshine. Their best-selling whiskey is their signature 19 Oaks brand, and their watermelon vodka is another popular offering.

Taylor added that they “have sold around 30,000 bottles of spirits since they opened in 2017.

The distillery used to be the location of a popular catfish restaurant and the Bradfords put their signature touches to the property; there is a laid-back, kick-back feel at the Front Porch.

“We wanted to bring a Hill Country vibe to the heart of East Texas”, Taylor explained.

Their busiest days are on Friday and Saturday when there is live music on the Pickin’ Porch. They have recently expanded the inside of the business, moving the distillery operations to the back, and have doubled in size, with more seating space and extra restrooms. The distillery also has food trucks on site on Friday and Saturdays, and they host a wide range of events throughout the year. “We are going to have Movie Nights beginning in October,” Taylor added.

They have hosted a classic car show and a chili cook-off, among other things, so far this year.

The question of the name of the distillery was posed by Rotarian Fred Sullivan. John Bradford answered that his cousin is Robert Earl Keen, and they got the name from his tune “The Front Porch Song.”

In 2020, when Covid basically shut down everything, the distillery began making hand sanitizer, giving it away on a drive through basis. On one single day, they made and gave away 300 gallons.